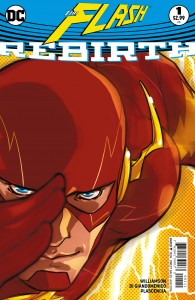 DC’s definitely having a good summer so far, with the “Rebirth” titles flying off the stands; whether readers will stick around for the regular issues is the big question, but at least everyone’s getting a taste of the new creative teams and directions. Flash: Rebirth is the most connected to the Rebirth comic itself, as it duplicates some scenes from that comic (the pre-New-52 Wally West showing up; Barry and Bruce Wayne in the Batcave, looking at the Watchman smiley

button) while expanding on them. The book’s status quo will be familiar enough to readers who know the TV series — no STAR labs support team, but a murdered mom/jailed dad/Eobard Thawne defeated/dad acquitted history — although, with Wally remembering parts of their altered past, that may change. I like Williamson’s idea that Batman and Barry have a lot in common — they’re both, at heart, forensic scientists — and I like di Giandomenico’s spidery line and light artistic touch, so this offers an encouraging start. So, too, for Wonder Woman: Rebirth; writer Rucka takes the “rebirth” part literally, acknowledging Diana’s past few years while shattering them, as she realizes that she’s been manipulated and her past altered, and sets out on a quest to discover the truth. This will lead to parallel storylines, as the book’s two regular artists — Liam Sharp, who does the second half of this issue, and Nicola Scott — will alternate duties on its twice-a-month schedule, with Sharp handling the present-day search for the truth, and Scott doing a “Year One” origin for the character. As with The Flash, it’s an intriguing blend of the old 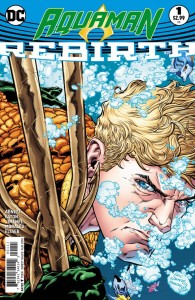 and the new, and a good beginning for this new chapter of the Amazon warrior’s history. Aquaman:Rebirth doesn’t so much change the Sea King’s history as review it; it’s reminiscent of Geoff Johns’s New-52 Aquaman #1, as it acknowledges the “he’s a joke” meme while establishing Arthur’s bona fides as a ruler of a vast undersea kingdom, and a super-powered heavyweight who’s trying to reconcile his land and ocean heritages, and act as a diplomat between those two worlds. Decently done (something you’d expect from an old-pro writer like Abnett), with clean character designs and some nice undersea art — although, since regular-issue artist Brad Walker doesn’t appear here, we’ll have to wait until the book’s first issue to see how he handles the visuals. 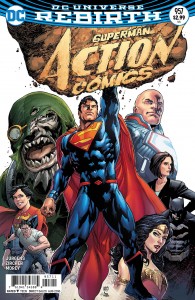 Of the regular DC issues for the week, Action and Detective offer the first ongoing looks at the “Rebirth” versions of Superman and Batman, respectively (and I was surprised at the thrill in seeing both titles revert to their original 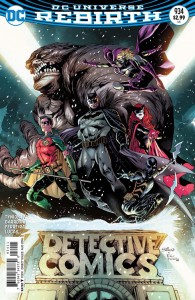 numbering, a reminder of how soon they’ll reach their thousandth issues). Action sees the Pre-New-52 Superman from Lois and Clark getting a shave and revealing himself to the world (with predictable results from Lex Luthor, who’s put on the “S” and proclaimed himself the new guardian of Metropolis), plus the mysterious return of both a major cast character and a villain (one that current author Jurgens first drew almost 25 years ago); it’s the title that’s taking the new start of “Rebirth” most seriously, with the biggest changes in the book’s status quo. Detective offers the opposite tactic: all the characters are their familiar selves, but the new plot gathers them in new combinations: faced with a mysterious foe who’s using high-tech drones to spy on Gotham’s vigilantes, Bruce recruits Kate “Batwoman” Kane to train many of the younger ones — Red Robin, Spoiler, 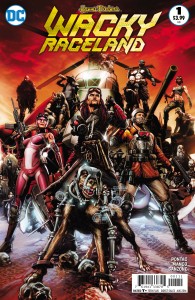 Cassandra Cain and a surprise (well, he’s on the cover right over there, so he’s not too much of a surprise) — into a smooth-operating team. The team focus sets Detective apart from the regular Batman title effectively, and Barrows, faced with a large cast to draw, does a good job distinguishing them from each other, and setting them against some shadowy, well-composed Gotham cityscapes.  Wacky Raceland is a puzzler — I mean, I could totally see a couple of DC staffers getting drunk or high at some convention and saying “You know what? That Wacky Races TV cartoon? Let’s do a post-apocalyptic Mad Max version of it, and make it grim, not wacky. And Dick Dastardly could be the sexy long-haired anti-hero! And Muttley could be a vicious cyborg dog!” What I can’t see is that, after they sobered up, it still seemed like a good idea. As a post-apocalyptic Mad Max ripoff, this is OK, but if you’re picking it up because you have fond memories of the cartoon, you’ll find no trace of it here except for a couple of similar names… and the auto-race theme. That leaves Black Canary, concluding this week (but never fear: she’s 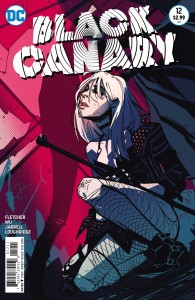 appearing in two of the Rebirth titles, Green Arrow and Batgirl and the Birds of Prey). Last issue, she got run through with a sword, but this issue she fast-forward hallucinates the next 40 years of her life before waking up and resolving the plot; the comic’s got the same Batgirl-like style as always, with one of the same writers, Fletcher, and art that manages to blend the cartoony and the dramatic seamlessly, thanks to the team of Annie Wu and Sandi Jarrell. Although sales of the single issues were never stellar, I’ll bet this becomes a perennially-popular set of trades, not only with the teen-girl audience that’s its natural constituency, but with anyone who appreciates good, off-the-beaten-path storytelling. 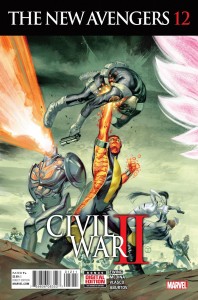 Not many Marvels this week; DC’s unexpectedly-popular relaunch has taken up everybody’s attention, although there are a trio of Civil Wars II titles: New Avengers is mostly setup, as New Avengers leader Roberto de la Costa and S.H.I.E.L.D. square off, with everyone manipulating 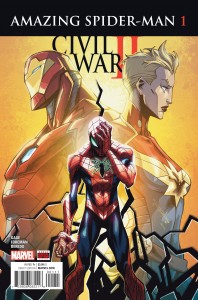 everyone else, unaware that they’re all being outplayed by The Maker (the evil Reed Richards from the Ultimate universe) and his own group of bad guys, the Revengers (made up of a bunch of really obscure D-list villains like Skar, from the Killraven/War of the Worlds ’70s comic, and perpetually pissed-off hippy Angar the Screamer). Ewing’s pretty good at manipulating a bunch of characters for his chessboard plots, and has a lot of imaginative takes on the underpinnings of the Marvel universe, so the next couple of issues of this book should be interesting.  That leaves two actual Civil Wars II tie-in mini-series; the Amazing Spider-Man one is by frequent Spidey-writer Christos Gage, so it gets Parker and his supporting cast right, as our webheaded hero shepherds the future-casting

Ulysses around to help teach him about the superhero biz. Gods of War is actually an extension of the recently-cancelled Hercules comic, by that book’s writer and with the same characters, as The Storm, the group of bad-guy new-age gods Herc’s been fighting, use the heroes’s conflict to further their own ends, and the Greek demi-god decides to get his old band of divinity-centric comrades back together to fight them. Abnett’s very good at this stuff, with a vast knowledge of Marvel history and a knack for Herc’s offbeat, sometimes-wise and sometimes-impulsive character, so it’s nice to see him given a chance to wrap up the Olympian’s story here. 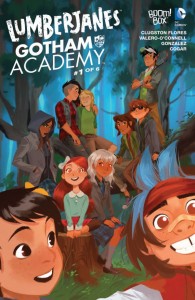 The Wicked and the Divine #20 — Writer: Kieron Gillen; 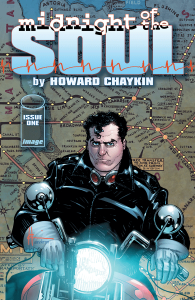 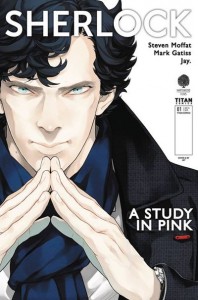 The week’s indy books — Lumberjanes/Gotham Academy, of course, crosses over those two titles, both cult hits with younger readers and criminally under-appreciated by other comics fans; they have a similar lighthearted-kid-adventure style, with diverse and sharply-outlined casts, so if you like one you’ll probably like the other, and should be reading this combo series, too. The writer, Chynna Clugston-Flores, had a couple of ’90s/early-’00s YA-comics hits with Blue Monday and Scooter Girl, so she’s a 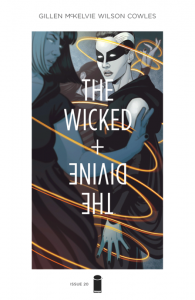 good choice here, and gets the two groups together quickly: a mysteriously-missing professor causes the Gotham Academy crew to trace him to the woods where the Lumberjanes’ camp is, and we’re off. Midnight of the Soul is the newest creator-owned book by Howard Chaykin, with a number of his normal preoccupations: it’s set in the post-WWII era, with a protagonist who’s an ex-soldier, an alcoholic, a failed writer and a betrayed husband; faced with a crisis, he’ll either grow into a better person or crash and burn spectacularly, but either way it’ll be expertly drawn and dark, cynical noirish fun. Sherlock is a manga adaptation of the  British TV series, originally published in 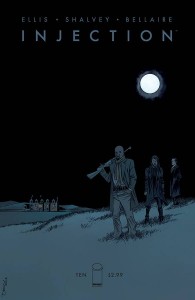 Japan and still in “reverse” right-to-left reading order; since it’s adapting the series’s first episode, “A Study in Pink,” it retains show-runner Steven Moffat’s sharp writing and energetic plotting, as Holmes and Watson meet and almost immediately are confronted with a case involving serial suicides. The varied British/Japanese/American influences make it something of a world comic, too, and show the universality of the brilliant-detective (and bromance) concepts that have driven the series since Sir Arthur Conan Doyle was writing it back in the 1800s. The Wicked and the Divine, meanwhile, has ramped up the action in its latest arc, as all the character- and mythos-building in the first two pays 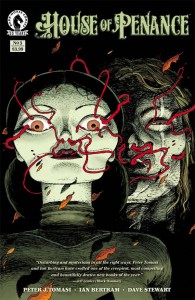 off; Gillen and McKelvie continue to show why they’re one of the smoothest and most modern-looking creative teams in comics. Injection finishes its second arc with subplots wrapped up and a murder mystery solved, but the rogue artificial intelligence of the title stronger than ever, and about to use the world as its Petri dish: techno-horror and various bad acts brought to you by the former Moon Knight team of Ellis and Shalvey.  House of Penance continues to get weirder and better with each issue, as Mrs. Winchester’s motives are explained, and we find that Mr. Peck’s past carries its own terrible sins. Guilt, death, blood and vengeful spirits, all filtered through Ian Bertram’s surreal, precisely-rendered 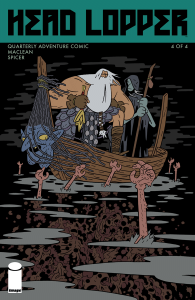 art, make this a fascinating and irresistible comic. Those adjectives also apply to Head Lopper, which ends its small-but-potent first season with a long battle between its title character and a demigod/sorcerer, and many craniums separated from many necks; imagine a more brightly-colored Mike Mignola doing a sprawling barbarian tale with action, horror and sardonic humor, and you’ll understand why this book has gathered an enthusiastic cult following.  That leaves Island, the Brandon Graham/Emma Rios-edited anthology that’s a 21st-century Heavy Metal, conveying some of the shock of the new that magazine had for ’70s readers, with its international creative cast, sf/fantasy 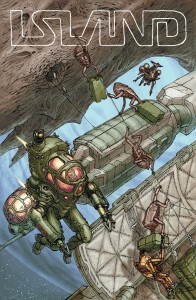 themes and longform serials; this issue has a couple of intro worldscapes by the Spanish artist Xuilia Vicente; “Mostly Saturn,” a neon-colored  meditation about reincarnation and governmental madness with geometrical/design elements worthy of Chris Ware, offered by Canadian creator Michael Deforge; a couple of alien bazaar/sf centerfold splashes by Ben Sears; and the 41-page final installment of “Habitat,” by Graham’s collaborator on Prophet, Simon Roy, about a far-future space-colony ship that’s in crisis: you’ll pay $7.99, twice the price of a regular comic, for this book, but get almost four times the content, with cutting-edge creators and top-notch production values, making it the bargain of the week.

With 40 years of experience in comic reading, collecting and reviewing, English Professor Phil Mateer has an encyclopedic mind for comics. Feel free to ask Phil about storylines, characters, artists or for that matter, any comic book trivia. He will post your questions and answers on the AABC blog. His knowledge is unparalleled! He is also our warehouse manager, so if you are looking for that hard to find comic book, ask Phil!
View all posts by Phil →
This entry was posted in New Comics, Reviews and tagged Action Comics, Aquaman, Black Canary, Civil War II, Detective, Flash, Gotham Academy, Head Lopper, House of Penance, Injection, Island, Lumberjanes, Midnight of the Soul, New Avengers, Sherlock, Spider-man, Wacky Raceland, Wicked and the Divine, Wonder Woman. Bookmark the permalink.