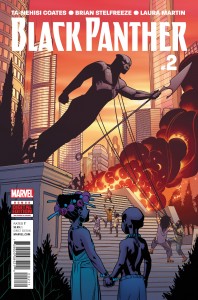 Back to a normal week (after the loaded-up couple of ones before FCBD, where publishers were making sure lots of product would be on the stands for all those new buyers), so let’s do our regular Marvel/DC/indy breakdown. No Marvel debuts, but Black Panther #2 is out; with T’Challa’s guest shot in the Captain America: Civil War movie, the book’s been getting a lot of attention, and the debut issue was the best-selling book last month. Coates is an obvious fan, and is making a lot of good moves here, but, as I said in reviewing the initial  issue, he’s writing a trade more than a monthly comic: the story is stuffed with elements, and depends on

readers knowing quite a bit about the character already; on the larger, 120+-page canvas of a book collection, the slow build and complex narrative should work fine, but in 20-page installments it may not be offering enough clarity or oomph, especially to new readers. Still, this second chapter builds and improves on the first, and does a better job of keeping the various threads clear, as our hero battles a brewing revolution in Wakanda, and a populace who’s tired of defeat and disruption and death, seeing him as more the problem than the solution. This book isn’t going anywhere until at least the movie starring the Panther in 2018, so Coates has a lot of rope, and he’s using it to weave some thoughtful themes about leadership, self-awareness and terrorism; I suspect if we stick with it for a few more issues, we’ll be pleased at the outcome. Gwenpool, also on its

second issue, is the opposite of Panther: giddy where that book is serious, and light-footed where it has a heavy social-justice tread; like its namesake, Deadpool, it mixes meta, humor, and dramatic elements with gleeful abandon. Gwen, from “our” world, has read a bunch of Marvel comics, so now that she’s trapped in that universe she can use her knowledge of plot elements (that the woman Thor is Jane Foster, for example) to her advantage; also, since everyone’s “just” a comic character to her, she’s had no qualms about blowing away bad guys and ignoring collateral damage, although there are signs that’s changing as she spends more time in her new home. This first arc would be wise to whip her up some powers or other advantages, though; right now, she’s Bugs Bunny, but without the firepower to back up her cocky attitude and quips,and that’s 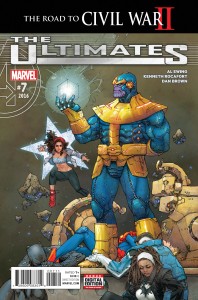 not a recipe for sustained success. All-New, All-Different Avengers, meanwhile, starts its next arc by introducing the new Wasp, a character with an unexpected connection to Hank Pym (and a nice cover by Alex Ross); author Waid supplies his usual mix of characterization (even Jarvis gets some significant screen time), subplots and action, and as a stand-alone tale this is a good introduction for readers who haven’t checked out the title yet. Similarly, Vision offers a look back at the scarlet synthezoid’s history with Wanda Maximoff, with guest artist Michael Walsh offering a dreamlike walk through their long, complicated history (and partially aping the styles of the original artists, too); this is another issue that offers a good one-off sampling of the book’s weird, 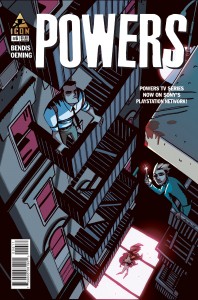 spooky charms for new readers. The Ultimates offers cosmic cubes and Thanos, in a run-up story to the Civil Wars II event; it’s worth it to watch how carefully Ewing’s been setting up the cosmic mechanics of the “New” Marvel universe, and meshing his carefully-selected group of heroes into a heavyweight team. Finally, a new Powers is out, just in time for the second season of the TV show; although that platform is new, it’s not clear that the comic has much story left to tell (Bendis and Oeming have been publishing it, albeit sporadically, since the turn of the century), and it takes a particularly dark, and possibly misguided, turn with one of the characters this issue — but the stylish art and tough-guy cop dialogue still make it worth a look. 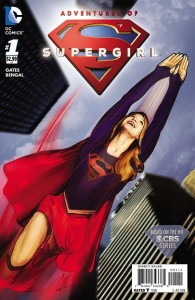 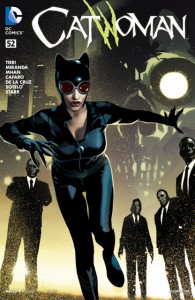 Lots of DC wrap-ups, and one debut: Adventures of Supergirl is actually a dead-tree reprint of DC’s digital comic, set in the TV show universe, that started the first of this year (and is already up to issue eight in pixel form). It’s nice to see it in print, though — author Gates keeps it light on its feet, and moving briskly, and artist Bengal, 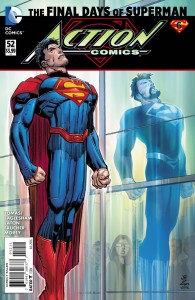 who’s done some work on the Batgirl comic, brings a cartoony, manga-ish modern style that works well with the character. Meanwhile, Swamp Thing author (and creator) Len Wein continues his mini-series with that character, and gives old-school horror artist Kelley Jones plenty of opportunities to draw rampaging swamp creatures, along with guest stars like the Phantom Stranger and the Spectre; if you like the occult corners of the DC universe, and lush, EC-inspired art, this is the comic for you. Three other titles offer 52nd-issue conclusions: Catwoman

concludes a two-parter involving the False Face Society, Black Mask and one of Selina’s old flames; it’s slight but serviceable. Action brings together the current Superman (who’s “dying,” because kryptonite/solar power/blahblahblah), the pre-new-52 Clark Kent from the Superman: Lois and Clark series, and the glowy, energy-being imitation of the Man of Steel who thinks he’s the real thing and is causing lots of trouble. This ends Action, for now (although it’s going to be reverting to its original numbering and bringing back the mostly-“classic” version of Superman for Rebirth), but the story itself continues into next week’s Superman/Wonder 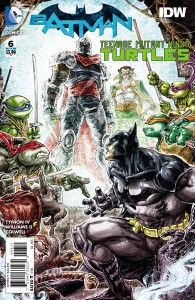 Woman, so it’s not quite over yet. Batman, as it’s been doing since its new-52 debut, sets the bar for the rest, with a quiet, skillful one-shot coda to the series that combines a current new villain with flashbacks to the adolescent, grieving Bruce Wayne and Alfred, with good-looking art from the increasingly-skillful Riley Rossmo. Another bat-book, Batman/Teenage Mutant Ninja Turtles #6 — by James Tynion IV, who also did the regular Batman this week —  concludes that surprisingly-successful mini-series in high style; it hasn’t broken new ground or done anything surprising, but it’s offered a well-constructed, solid story that’s hit all the right beats, brought in all the right supporting-cast good and bad guys, and been satisfying for fans of both franchises; the conclusion sets up a possible sequel, and you can bet that 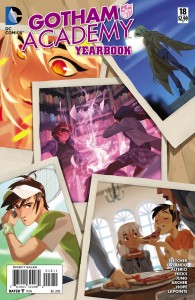 DC, looking at the sales figures on this one, already has one in the works. Gotham Academy should count as a bat-book, too, since it’s set in the title city and often features familiar characters, especially the Damien Wayne Robin; this conclusion to the first volume is an anthology, with Brenden Fletcher and Adam Archer offering a wrap-around plot that pulls together smaller stories about the academy and its many denizens from Fletcher and Moritat; Steve Orlando and Minkyu Yung; Natasha Alterici; and Faith Erin Hicks; the best news is the announcement of this skillful, addictive YA title’s Gotham Academy: Second Semester coming in September. 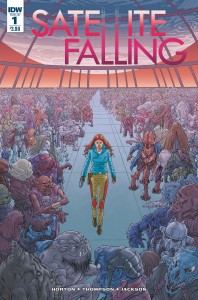 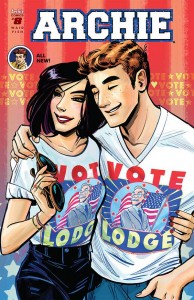 Satellite Falling, the one indy debut worth noting, has a standard sf setting — a vast orbiting satellite with a population of 75,000 beings, representing over 100 alien species. Its heroine is a taxi driver when we meet her, but turns out to have a more interesting main job as a bounty hunter; there’s the usual conflicts with the cops, sinister drug lords, etc., all filtered through the space-colony prism, while artist Thompson’s very clean line is good at keeping all those extraterrestrial races distinct and interesting. If you’re attracted to similar sf/crime mashups like The Fuse, this should give you a lot to like.  Archie sees Mark Waid and Veronica Fish mining a

familiar vein — Veronica’s dad Mr. Lodge hates Archie, because Archie is a walking disaster — and adds two wrinkles: it’s very early in everyone’s relationships, since the Lodges have just moved to town, and the red-headed teen’s essential good-heartedness makes Lodge’s Trump-like money and political machinations seem even worse. This is a canny way of reinvigorating a very old franchise, and so far has been working just fine.  Badger is trying for a similar update (on a much smaller scale), as its multiple-personality, martial-arts master of the crazy is getting a modern-day origin that retains much of the personality and flavor of the original ’80s version, but has added elements like the main adversary being Vladimir 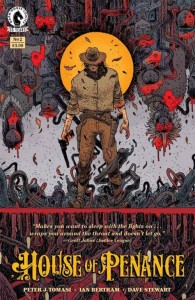 Putin. Baron’s deadpan satire, and Mayerick’s knack for old-school caricature combined with solid kung-fu moves, make this all work much better than you’d think. House of Penance, whose title structure is the Winchester Mystery House in California, has its second issue out this week; I like the way writer Tynion IV (him again!) has jumped right into the narrative flow in the book’s first two installments, leaving it to readers to Google the house and its haunted, widowed owner, Sarah Winchester, to see why she’s acting the way she does; I also like Ian Bertram’s spare, almost woodcut-like images, which give the subtle horror a dreamlike intensity, and keep us from being able to tell whether it’s 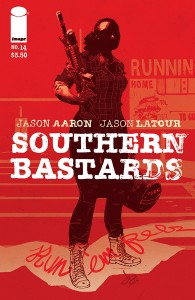 real, or hallucinations in the minds of its damaged, guilt-ridden characters; either way, it makes for a fascinating, and utterly unique, comic. Southern Bastards, back after a while,  concludes its “Homecoming” arc as the Marine daughter of Earl Tubb, who started out as the book’s hero and then got his fool self kilt by the title Bastards after just a couple of issues, comes to town to investigate her father’s death; things go about as well as you might imagine. No one writes cracker ignorance quite like Aaron, and no one draws it like Latour; you can tell they’ve both been down in the middle of it and understand it inside and out, and the result is equal parts queasy, righteous and very entertaining. That leaves Island, the modern-day anthology comic edited by

Brandon Graham and Emma Rios; it offers six pages of scenes from an alien planet by Kim Kirsch;  the first 32-page chapter of “Firebug,” by Johnnie Christmas, which has detailed, cinematic art by him (and immersive, skillful, great-looking coloring by Tamra Bonvillain), mostly about why it’s a bad idea to mess with a fire goddess; the penultimate 22-page installment of Matt Sheean and Malachi Ward’s “Ancestor,” about a cult’s attempts to accelerate evolution, and the resulting beings it creates; seven pages of illustrated reviews/articles about weird movies from Robin Bougie; and a back cover by Graham. That’s 68 pages of decent early-Heavy-Metal-ish fantasy storytelling for your $7.99, not a bad deal at all.

With 40 years of experience in comic reading, collecting and reviewing, English Professor Phil Mateer has an encyclopedic mind for comics. Feel free to ask Phil about storylines, characters, artists or for that matter, any comic book trivia. He will post your questions and answers on the AABC blog. His knowledge is unparalleled! He is also our warehouse manager, so if you are looking for that hard to find comic book, ask Phil!
View all posts by Phil →
This entry was posted in New Comics, Reviews and tagged Archie, Avengers, Badger, Batman, Black Panther, Catwoman, Gotham Academy, Gwenpool, House of Penance, Island, Powers, Satellite Falling, Southern Bastards, Supergirl, Superman, Swamp Thing, Teenage Mutant Ninja Turtles, Ultimates, Vision. Bookmark the permalink.