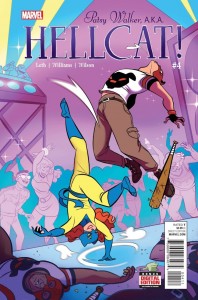 I’ve really been liking Hellcat, with its breezy cartoony 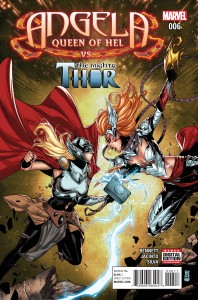 style and script that manage to acknowledge both the Stan Lee/Dan Decarlo Millie the Model days and the character’s superhero history since. Naturally, since I like it the book’s been doing badly on the stands (Heidi McDonald’s essential The Beat website offers a monthly analysis of Marvel sales, and Hellcat #3 was under 17,000 copies) although hopefully its modern, female-friendly style will compensate for that with much better digital and, eventually, trade paperback sales — like DC’s Batgirl has done. Don’t wait, though — check out a copy now, because it’s a cool comic that deserves a chance.  Sadly,  Angela, Queen of Hel won’t get that chance — its sixth issue announces (via one of the characters in the book itself, because it’s been getting increasingly meta anyway) that its next issue will be its last.  Too bad, because it’s been an interesting experiment — another very female-centric book (there 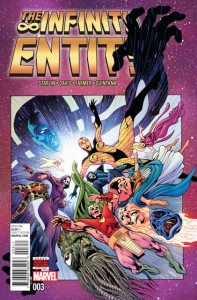 are pretty much no male characters, unless you count Thori, Kid Loki’s old hellhound dog who’s been hanging around, making snide comments), with lush fantasy-tinged art and a story that’s both adventurous and amusingly self-aware. It’s another comic that would probably do well with younger, modern readers — if they knew about it, but considering that its sales are even worse than Hellcat‘s Marvel’s pulled the plug. This penultimate issue does guest-star the Jane Foster Thor, though, so fans of that title should still seek it out. Infinity Entity has no such problems — it’s a deliberate mini-series, for one thing, and for another it’s a very known quantity, with Starlin’s cast of cosmic characters familiar from decades of exposure, and cameos in 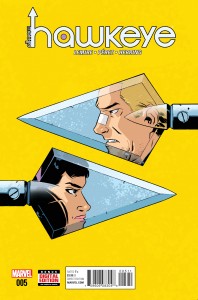 Marvel films. As a bridge between two of his Warlock/Thanos original graphic novels, and a chance to see him write about, and Davis/Farmer draw, pretty much every Marvel universally-powerful character, from Eternity to Infinity to Death, it’s a fun, if sometimes talky, story.  Finally, Hawkeye, while it hasn’t reached the heights of the Farmer/Aja years, has a decent Jeff Lemire story (split-screened in this arc between Kate’s tribulations as a child and the current double-Hawkeye team rescuing a group of mutant kids from S.H.I.E.L.D.), and Ramon Perez’s fluid art style, able to deliver the slick modern sequences and the hazier, more ethereal flashbacks with equal aplomb. 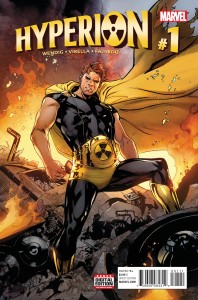 The non-Standoff: Assault on Pleasant Hill Marvels this week. Hyperion‘s the sole first issue, and, while it’s not bad (Virella, who’s worked on the 1872 Secret Wars western tie-in, and on Return 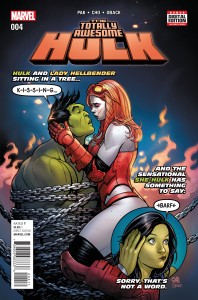 of the Living Deadpool, starring guess who, has a clear style that reminds me a little of George Tuska), it makes a rookie mistake: it has its hero hiding his powers, and being only a supporting character in his own book, until just the last few pages. That kind of slow build would work just fine as the first chapter of a trade edition, but in a stand-alone debut comic it’s probably fatal: in today’s very competitive newstand environment, failing to hook readers with flash and pizzazz from the beginning usually means they’ll put the book back and spend their money on something else. Totally Awesome Hulk has known that from the beginning; that’s why it’s been using Frank Cho’s ability to draw giant monsters, scantily-dressed alien warrior women, the similarly-zaftig She-Hulk, and similar elements, along with a smart script from the veteran Greg Pak, to pull readers in and keep them. The Ultimates writer Al Ewing has taken a more-intellectual but 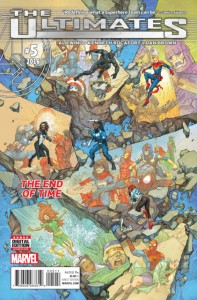 still-canny approach, with a team of powerhouses (the Blue Marvel, who’s a cross between Reed Richards and Superman, plus the Black Panther, Captain Marvel, Monica “Spectrum” Rambeau and Ms. America Chavez) tackling cosmic-level projects (making Galactus an energy provider instead of an energy vampire, and trying to fix the Marvel’s universe’s broken timelines by going completely outside of… well, everything); his knack for high-concept quantum-level science and trippy philosophizing makes him a modern-day equivalent of the ’70s-era Starlin, and Kenneth Rocafort, who’s called on to deliver a number of splashy visuals and draw lots of characters, backs him up admirably. Ewing’s also the writer on Contest of Champions; that book had a slow, why-are-we-reading-this? start, but at this point has 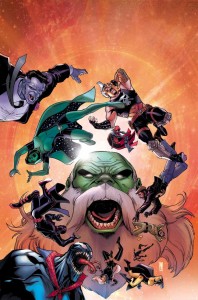 evolved into a similarly-cosmic spectacle, with a version of the older-Hulk Maestro sparring with a gaggle of Elders of the Universe, resurrecting Battleworld, and trying to get his mottled green hands on a globe of Iso-8, the reconstituted Marvel universe’s version of an all-powerful cosmic cube; with a last-page call-in to the Ultimates, it looks like there’ll be a crossover next issue, a good way to combine the writer’s two books, and maybe gain a few readers (while Ultimates is at a relatively-healthy, for modern times, 28,000 readers, C of C is hovering around 21,000, closer to cutoff/cancellation territory). 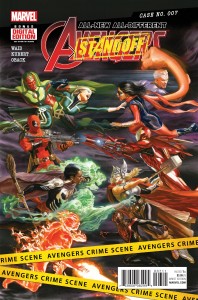 The Avengers/S.H.I.E.L.D. crossover installments for this week; they don’t particularly mesh into one story, so the reading order doesn’t matter too much, but the order as listed here is the “official” one. All-New All-Different Avengers has been the best of the Avengers titles so far, thanks to its very smooth, ultra-professional combination of Mark Waid and Adam Kubert; its lineup combination of the old (Iron Man, the Vision), the new (Ms. Marvel, Nova and the Miles Morales Spider-Man, all mid-teenagers) and the different (Sam Wilson 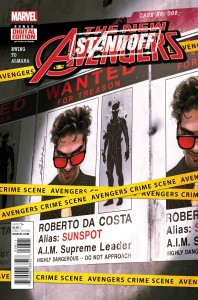 Captain America, Jane Foster Thor) has offered lots of opportunities for characterization and good-looking action; getting drawn into the crossover doesn’t help, but it doesn’t happen until more than halfway through the book, and there’s at least a meeting with the Uncanny Avengers to liven things up.  New Avengers has Al Ewing yet again (three books this week mark him as one of Marvel’s new workhorses), and, although he’s been saddled with a bunch of C- and D-listers (a couple of Young Avengers, White Tiger, Squirrel Girl, Songbird and the new kid Power Man, with Sunspot in charge and Hawkeye the only name readers are guaranteed to know), they’ve started to gel into a reasonably-interesting unit; the art is just OK, though, and their installment of the crossover has them doing little more than breaking Rick Jones out of a S.H.I.E.L.D. holding facility, not the most exciting of missions.  Still, they’re better off than The Howling Commandos of S.H.I.E.L.D., which, only six issues in, announces its cancellation with this issue, with only enough time for a quick deus ex machina to get everyone back to headquarters in the last two pages, and a polite 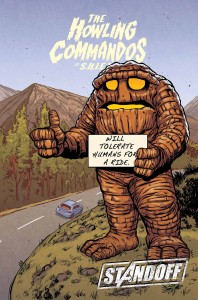 good-by on the letters page. Too bad; this was another book with a fatally-slow start and a non-stellar cast (when an LMD Dum Dum Dugan and a zombie Jasper Sitwell are your go-to leads, with Man-Thing the closest to a recognizable character, you’re in trouble), but its cast of misunderstood monsters, aided by its deadpan, third-person-referencing breakout character, the massive Kirby alien Orrgo, was just starting to get appealing, especially with Schoonover’s art getting better with each issue. Too many books on the stands, and not enough reader interest, had already pushed its sales under 19,000 by its second issue, and so it ends with much more of a whimper than a bang. 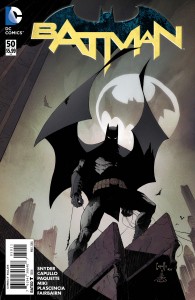 Only two DCs (after all those Superman titles last week), and Batman #50 is the big one: the conclusion to Snyder and Capullo’s year-long “Commissioner Gordon as Batman” story, with Bruce Wayne back in the costume (quelle surprise…), and a big blowout

fight. Like Superman #50, this is a legitimate crowd-pleasing double-size conclusion, exactly what these 50th issues are advertised to be. Secret Six, not one of the original New52 titles, doesn’t get a 50th-anniversary blowout, but it does have a Batgirl guest appearance, a major resolution for one of the characters, and a welcome return of an old-school DC partnership; as always, Simone’s dark-tinged characterization of her scruffy group of “bad guys,” and their stubborn sense of family against the rest of the world, makes the whole thing work. 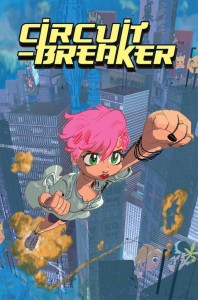 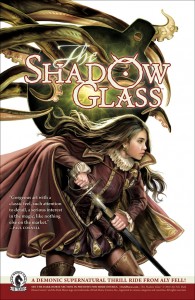 The week’s indy first issues, all of mini-series. Circuit Breaker is the best: new Kyle Baker is always a cause for celebration, and here he and writer Kevin McCarthy are offering a very old-school tribute to Astro Boy creator Osamu Tezuka. Baker’s one of the best stylists in comics, a chameleon who somehow always retains his own style too, and his buffed-up version of McCarthy’s noble-robot homage plot pays

tribute to the original while adding some modern-animation colors and energy to it: Tezuka as adapted by Genndy Tartakovsky. The Shadow Glass is a rare, for current comics, solo writer/artist/colorist debut from Aly Fell, an occult fantasy set in England in 1562, four years into the reign of Queen Elizabeth I and two years before the birth of Shakespeare; Fell puts lots of care into the research and story, has lots of fun with the period costumes and settings, and delivers a very good-looking book that establishes its appealing characters 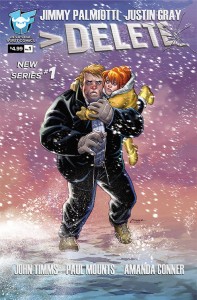 and ends with just the right come-back-next-issue twist.  Independence Day: Resurgence isn’t a movie adaptation but a prequel to the sequel, set immediately after the first film but a couple of decades before the new one; it’s OK as a souvenir, if you loved the first film and can’t wait to see the second. Delete is one of those well-constructed-but-minor tough-guy crime thrillers that Palmiotti and Gray love to produce, about a near-future where memories can be downloaded; it’s got a mute girl with dangerous implanted memories on the run, helped by a taciturn handyman, and is worth checking out just to admire the Amanda Connor cover. 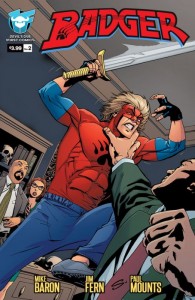 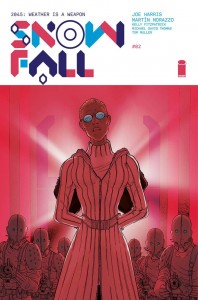 More indys: Badger #2 felt a lot more readable than #1, more comfortable and familiar, as if Baron needed time to get back into his Madison meshugener’s mindset to really hit his stride; it’s at a polished, easy-to-like stage of the character’s origin, and Tony Akin’s 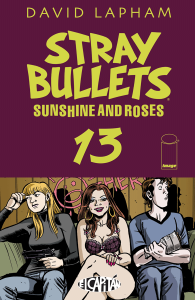 able, smooth-flowing illustrations work well with it. Snowfall is set in a post-climate-change world where, ten years ago, a scientist created a weathermaker that somehow turned into a weapon, and he may or may not have used it for eco-terrorism; its classic-sf extrapolation of current trends is a lot like Harris’s earlier Great Pacific, so fans of that work should be happy with this one.  Stray Bullets hits the climax — although not the conclusion — of its current

volume, chock-full of pulp energy: strippers, heists, lovers, losers and very bad people, with suspense and at least one chilling plot twist: if you’ve never read it, this is a good argument for why you should.  Outcast is, as always, Robert Kirkman’s dependably-readable, carefully-constructed exorcism serial, enhanced by Paul Azeceta’s just-slightly-creepy bystanders, dimly-lit interiors and clever, cinematic little insert panels: like The Walking Dead, it’s best first experienced through the trades, although this single issue isn’t a bad example of its strengths.

With 40 years of experience in comic reading, collecting and reviewing, English Professor Phil Mateer has an encyclopedic mind for comics. Feel free to ask Phil about storylines, characters, artists or for that matter, any comic book trivia. He will post your questions and answers on the AABC blog. His knowledge is unparalleled! He is also our warehouse manager, so if you are looking for that hard to find comic book, ask Phil!
View all posts by Phil →
This entry was posted in New Comics, Reviews and tagged Angela, Avengers, Badger, Batman, Circuit Breaker, Contest of Champions, Delete, Hawkeye, Hellcat, Hulk, Hyperion, Independence Day, Infinity Entity, Outcast, S.H.I.E.L.D., Secret Six, Shadow Glass, Snowfall, Stray Bullets, Ultimates. Bookmark the permalink.