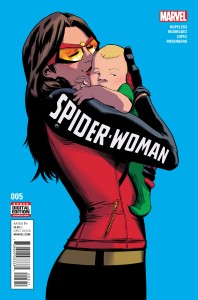 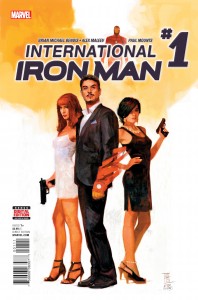 Fewer Marvels of note than usual this week, but some good ones: Spider-Woman opens with a three-page speech from Jessica talking about being a single mother of a newborn, and it’s equal parts funny and wise (both Hopeless and Rodriguez mentioned in the letters page last issue that they’re recent first-time parents, and it shows in the dead-on accuracy here in both the art and script, 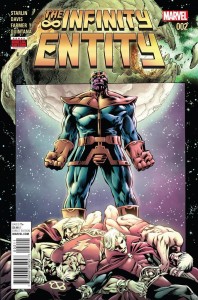 from the harried Jessica, T-shirt covered in spit-up and clutching a half-eaten Pop-Tart, to the horrified reaction from her audience). The whole issue’s like that, and anyone who’s ever been a parent (and had to struggle with when and how to go back to work) will appreciate it. The whole pregnant-superheroine aspect of this book’s relaunch seemed too gimmicky at first, but it’s actually energized and matured it, and turned it into one of the best comics on the stands right now.  The one Marvel debut this week is another Iron Man book by Bendis, the writer of the regular title, and it reunites him with Alex Maleev (they’ve collaborated on Daredevil, Spider-Woman and Moon Knight, among others), with Tony trying to track down his birth parents and running into an old Elektra-like flame; most of the issue is an 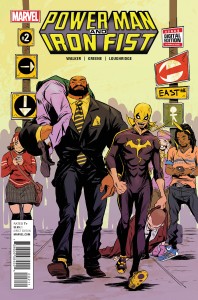 extended flashback of their meeting in college in England twenty years ago, and if you like Maleev’s expressive noir style and Bendis’s knack for dialogue, you should like this just fine.  Infinity Entity #1 came out just last week, so #2 this week should be a known quantity — Starlin’s cosmic-themed script, as a new/old, amnesiac version of Adam Warlock investigates his identity and comes across a number of familiar (and powerful) faces, and the old-school superhero art of Davis and Farmer, make it worth reading.  Power Man and Iron Fist, also on its second issue, extends the bickering bromance of the first: Danny wants them to team up in a “Heroes For Hire” bit again, while Luke’s wife Jessica sees that as a very bad move (as does Luke), but their former administrative assistant has just gotten out of prison, and 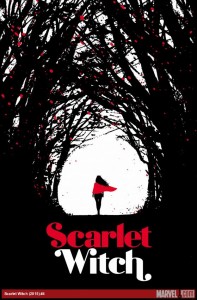 already tricked them into stealing a mystical necklace from another bad guy, and events accelerate from there. Walker’s good at the chemistry and dialogue between the buoyant Danny and the more-grounded, long-suffering Luke, and Greene’s art (which still reminds me a lot of M.D. Bright) makes everyone look appealing, and hits both the funny and the serious scenes expertly; after two issues, this book’s established a tone and style that should let it stick around for a while. Scarlet Witch, a little further along with its fourth issue, makes a similar case: from the striking David Aja covers, to Robinson’s careful characterization and canny development of a supporting cast for Wanda (including a ghostly Agatha Harkness and a formidable enemy who lets him show off his ability to write Irish accents), to the art, with the 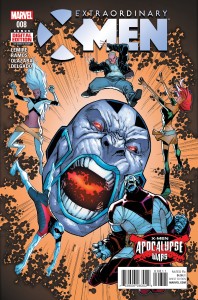 stylized Chris Visions on the otherworldly “witches’ road” sequence that makes up most of the issue, and the always-welcome Steve Dillon on the parts set in Ireland, this continues to be a solid, and good-looking, first arc. Extraordinary X-Men, now starting its second big arc, has a similarly high-quality creative team in Lemire and Ramos; now that the team has gelled, watching Storm, Colossus, Old Wolverine, Young Jean Grey, Nightcrawler and Iceman makes this feel like the “real” X-Men book, and setting them against a formidable foe like Apocalypse is a canny move (given the upcoming movie), and one that should generate some reader interest in what’s become a pretty-good comic book.

Superman: The Coming of the Supermen #2 (of 6) — Writer/Artist: Neal Adams;  Colors: Alex Sinclair 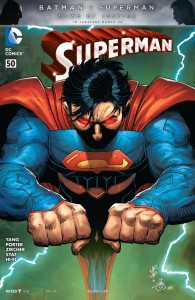 The week’s DCs of note — 80% of which are Superman comics, while the other 20% features the devil (and, of course, a current TV star). Superman/Wonder Woman and Superman are the last two parts of the year-long “depowered” story that saw Clark get outed as Superman and lose most of his powers; it’s been fun (if a tad drawn out), but it’s nice to see him back: he actually regained the powers in last week’s Action #50, so these two have him fighting Vandal Savage, revealed a while ago as the Big Bad Guy. Superman/Wonder Woman is the penultimate chapter, so of course its job is mostly to get us to the double-sized Superman #50, which then sees Vandal tempting his opponent with riches and power, and preaching a very Donald Trump Darwinian philosophy. Befitting a big conclusion, it’s good-looking: a simple, striking villain’s-POV cover by John Romita Jr., and a number of splash pages (including five double-page ones) to showcase the 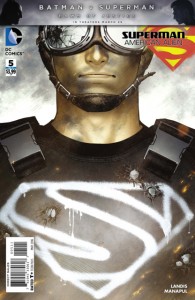 climactic battle, mean that if you’re a Superman fan, you’ll want both books, but this one especially.  Of the mini-series, Neal Adams has the biggest name, and his Coming of the Supermen, wherein three Kryptonians journey to Earth to help the Man of Steel against Darkseid and his crew, looks just as good as you’d expect; the only downside is that Adams got no dialogue help with this issue, and his odd Kirbyesque tics and rhythms are sometimes distracting. Over in Superman: American Alien, the writing’s the strength, as this updated origin has had the kind of surprising cameos and coincidences you’d expect from one of DC’s CW shows. In this issue, Clark’s made it to Metropolis and started at the Planet, but is still trying to figure out what to do with 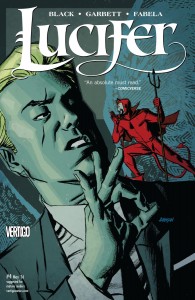 his powers; Francis Manapul’s art is a lot more ethereal than Adams’s supercharged realism, but it’s good at detailing our hero’s first meeting with the Parasite (and, inevitably, Lex Luthor), and an inspirational speech from Lois, so it all works out.  That leaves Lucifer, another current-media tie-in which is facing a tough tightrope act of satisfying fans of both the new TV show and of the long-running Mike Carey/Peter Gross series that preceded it: especially difficult, considering they aren’t that much alike, but fortunately writer Holly Black tilts it considerably toward the comic, and brings in many familiar elements from it, to good effect. Four issues in, it’s become close enough in spirit to the old series that it feels good to have it back. 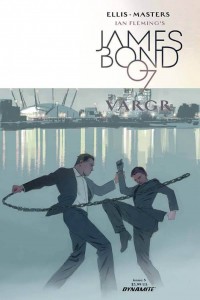 The indy offerings: two by Warren Ellis, including Injection, his story of an A.I. program loose in the 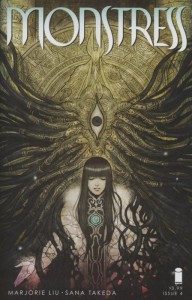 world and mimicking magic, and the team of typically-Ellisian (Ellisonian?) misfits that, having let it out, are now trying to contain it and the people who’ve been encountering it (or, as one character summarizes: “We are dealing with a confused criminal cult who have mistaken an artificial intelligence for an alchemical substance and/or presence that represents ultimate power and enlightenment.” Yes, exactly…); it’s, as always, enlivened by Declan Shalvey’s precise, deadpan

art.  James Bond is nearing the end of its arc, and, amid the deathtraps and cliffhangers and fights against formidable foes, showcases the knowledge of tradecraft and British government bureaucracy that Ellis, English to the core, has always been particularly good at. Monstress has had a sporadic schedule lately, but seeing Sana Takeda’s lush, evocative art and coloring makes the wait worthwhile; she’s very good at bringing Marjorie Liu’s high-fantasy tale of supernatural 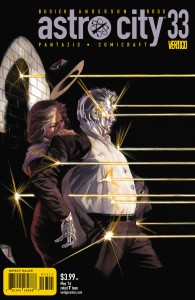 hybrids, ancient grudges, talking cats and a heroine with a mysterious past and a Lovecraftian secret to life, with a style that’s something of a hybrid itself: equal parts Japanese and American influences, and all the better for it.  Low, about mankind retreating deep undersea after the sun expands, finally gets to the surface this issue, and of course it’s not what its characters were expecting, but nicely-designed settings by Tocchini and McCaig (who do glaring yellow/orange desert heat just 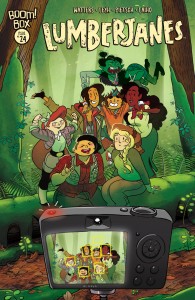 as well as they’ve been doing cool green underwater life) make it entertaining — even if some of the new antagonists seem to have been ordered straight out of dystopian-sf central casting.  Astro City‘s in the middle of a multiple-part hardboiled detective tale (except that, this being Astro City, the weary private eye has steel skin), and is just as good as always.  Lumberjanes concludes its current arc with its sharply-drawn quintet of adolescent summer-camp girls just as kick-ass and energetic as ever (although the real ending’s likely to come next issue, a 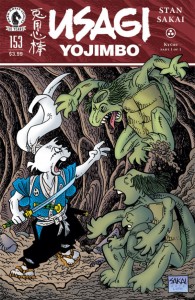 double-sized 25th anniversary); it continues, in its quietly-rowdy way, to be one of the freshest and best comics available, charming for both new readers and veterans. It always seems to come out the same week as Usagi Yojimbo, a similarly-eclectic book (a rabbit samurai? In a well-researched feudal Japan, except for all the snthropomorphism?); this issue’s stand-alone tale has all the supernatural elements, swordplay and precise, clear-lined art that Sakai’s been providing, not for 25 issues, but for almost 250, spanning over three decades of quality storytelling since the character’s first appearance in 1984.

With 40 years of experience in comic reading, collecting and reviewing, English Professor Phil Mateer has an encyclopedic mind for comics. Feel free to ask Phil about storylines, characters, artists or for that matter, any comic book trivia. He will post your questions and answers on the AABC blog. His knowledge is unparalleled! He is also our warehouse manager, so if you are looking for that hard to find comic book, ask Phil!
View all posts by Phil →
This entry was posted in New Comics, Reviews and tagged Astro City, Infinity Entity, Injection, International Iron Man, Iron Fist, James Bond, Low, Lucifer, Lumberjanes, Monstress, Power Man, Scarlet Witch, Spider-Woman, Superman, Usagi Yojimbo, Wonder Woman, X-men. Bookmark the permalink.