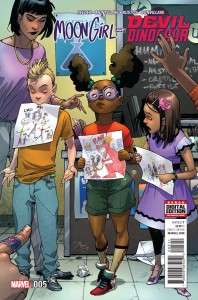 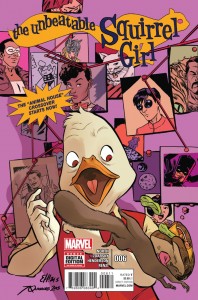 These four books always seem to come out around the same week, and they’re classy, vastly-entertaining all-ages comics that make me happy. Moon Girl and Devil Dinosaur wraps its first arc, its pint-size heroine executing a manic rescue scene and establishing her bonafides as an actual superhero, a preteen techno-wiz Shaggy with a big grinning red saurian Scooby Doo. 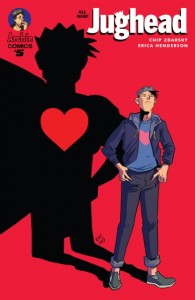 Watch for the trade collection, which deserves to find a vast audience and make this book a hit, provided Marvel’s patient enough to stick with it. The Unbeatable Squirrel Girl kicks off a crossover with Howard the Duck, so artist Erica Henderson gets to work both with regular SG writer Ryan North and Howard scripter Chip Zdarsky… who’s the writer on Jughead… which is also drawn by Henderson;  that lets her use her angular, cartoony superhero style both on Kraven the Hunter and on Jughead’s fantasy avatar Captain Hero this week. Both North and Zdarsky give her smart, 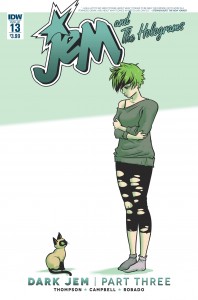 funny, independent, appealingly-stubborn title characters to draw, and the resulting comics are charming, empowering and fun. Those adjectives apply to Jem and the Holograms, too, which deserves some sort of award for least-anticipated really-good-comic; it’s in the middle of an up-the-stakes extended adventure that requires artist Campbell to deliver a number of special effects, along with the regular comedy and drama and pop-music fashion and late-teens/early-20s  puppy-dog takes on relationships, and she’s just wonderful, making us care about the characters while admiring both their decency and their sense of style. 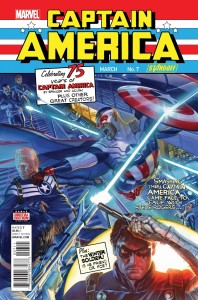 Three other Marvels; I’m not sure whether it’s a spoiler to say that Captain America, a $5.99 75th Anniversary extra-sized issue behind an Alex Ross cover, features the return of… well, a character who wasn’t exactly gone, but has been diminished for a year or two, and that it’s right in time for the Cap movie in just a few short weeks. That’s in the regular- 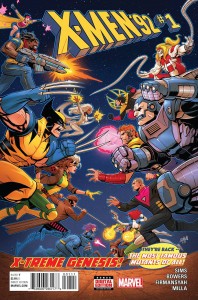 continuity story, which offers a Standoff: Pleasant Hill crossover that, blessedly, doesn’t really cross over all that much, except that Kobik, the little-girl cosmic cube, is the one who brings… you know who… back up to speed. In addition, there are back-up stories by Joss Whedon and John Cassaday, by Tim Sale, and by Greg Rucka and Mike Perkins: a reasonably all-star lineup, and one befitting Cap’s long history.  X-Men ’92 is a regular series based on the Secret Wars mini (which did better than Marvel thought it would), featuring the ’92-TV-cartoon lineup: Wolverine, Jubilee, Beast, Rogue, Storm, Bishop and Psylocke, along with Professor X, and with the Xavier School as the setting.  Artist Firmansyah uses a simplified animation style that looks close to the video version, so if thinking about all those afternoons watching the X-Men on TV makes you nostalgiac (and, even with that year right there in the title, it’s still startling to 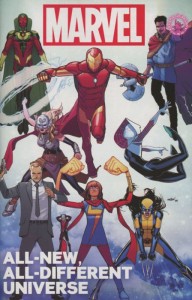 realize those cartoons were being shown over 20 years ago), you’ll want to check out this first issue. All-New, All-Different Marvel Universe #1 is an Official Handbook, Who’s Who-style book; the major players are on the cover, right over to the left; included but not pictured are Silk and the Inhumans, among others (no entries on Moon Girl and Devil Dinosaur or Squirrel Girl, though, which seems like an odd missed bet for two series that the company should be spotlighting). The entries themselves are long and detailed, and even have a couple of spoilers; if you want to know the current status of these characters in the current Marvel universe… well, here you go.

Only two DC books (one and a half, depending on whether you think Vertigo titles count), with Batman and Robin Eternal wrapping up its six-month mini-series in decent fashion. Cutting the number of weekly 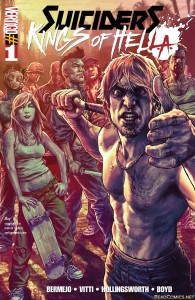 issues in half eliminated a lot of the annoying padding in previous similar series, and this conclusion’s timing is good: with Bruce Wayne back in his regular title, he returns in this one, too, and the finale finds all of the Robin characters, and the rest of the Batman family, in good shape; even if you haven’t been reading this every week, this last issue is a good way to catch up on all the developments. Suiciders is a continuation of the previous Vertigo series, about an L.A. hit by a massive earthquake, and the generation that grows up in the shattered city; it’s just the kind of gritty dystopian tale you’d expect from that setup, and well-done if you’re a fan of that genre. 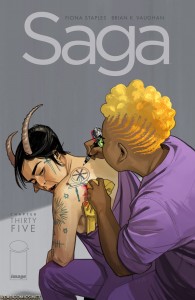 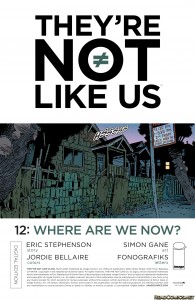 Four books from Image this week, all fantasy or sf and showcasing the wide range of quality creators at that company right now. Saga is the most long-lived, over three years and going strong, with Vaughan’s ability to combine a sprawling galactic cast with small-but-dramatic human moments, and Staples’s fluid, amazing art making it the company’s second-best-selling book (if it had a TV series, 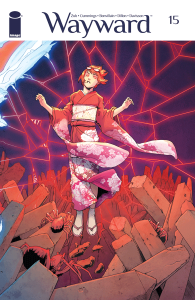 it might give Walking Dead a run for its money). They’re Not Like Us is one of those young-adults-with-abilities stories, like the X-Men except that they don’t put on costumes, fight crime or do much of anything, except hang out and try to survive; that sounds boring, but thanks to Stephenson’s knack for realistic characters, and Gane’s pretty New York club scene depictions of them, it’s an entertaining comic.  Wayward is about a half-Irish, half-Japanese girl in Japan for the first time, discovering her own supernatural powers and connections to Japanese myth, and gathering allies and 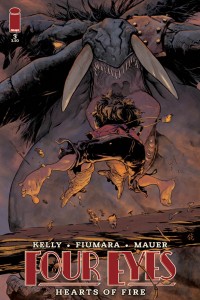 enemies; it’s helped by a compelling story, by Cummings’s skilled manga-esque art, and by Bonvillain’s bright, expert coloring. Fifteen issues is an eternity in today’s market, and this book’s just getting started; pick it up and see why.  That leaves Four Eyes: Heart of Fire, the second volume of a series about a Depression-era kid raising a castoff dragon to fight in illegal arenas: Kelly has a way of making all of his hardscrabble characters complicated and true, and Ortiz has a fine line and a slightly-exagerrated style that make this one of the better-looking comics on the stands; as a coming-of-age, boy-and-his-lizard tale, it’s very well done.

Two smaller-press books: Ragnarok is Walt Simonson doing a Thor story centuries after the title apocalypse, and, somehow, selling under 10,000 copies an issue; pick it up and see why that’s a criminal neglecting of one of comics’s oldest and most accomplished talents 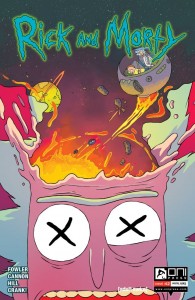 (the alternate cover to the right is by Mike freaking Mignola, to give you an idea of the level of talent out there who want to be part of this project). Rick and Morty is just totally gonzo, mean-spirited but occasionally warm-hearted science fiction, Star Wars crossed with Fringe crossed with South Park crossed with Back to the Future, and is more than worthy of the cult TV show that inspires it; read this issue, with its heroes trapped in the brain of a decapitated alternate-universe version of Rick, and see if you can resist coming back to see what happens next.

With 40 years of experience in comic reading, collecting and reviewing, English Professor Phil Mateer has an encyclopedic mind for comics. Feel free to ask Phil about storylines, characters, artists or for that matter, any comic book trivia. He will post your questions and answers on the AABC blog. His knowledge is unparalleled! He is also our warehouse manager, so if you are looking for that hard to find comic book, ask Phil!
View all posts by Phil →
This entry was posted in New Comics, Reviews and tagged Batman, Captain America, Four Eyes, Jem and the Holograms, Jughead, Moon Girl and Devil Dinosaur, Ragnarok, Rick and Morty, Saga, Squirrel Girl, Suiciders, Thewy're Not Like Us, Wayward, X-men. Bookmark the permalink.