Eight Secret Wars tie-ins, but only three DC first issues, make this a smaller week than the last few, but there are still plenty of comics to talk about. Don’t try to buy them at the All About Books and Comics at 5060 North Central, though, because it no longer exists — instead, come to the brand-new All About, right around the corner at 24 West Camelback, starting July 1st, and marvel at the amazing job everyone’s done to create the best-looking place to buy comics (combined with, obviously, the best selection of old and new issues) in the whole state! 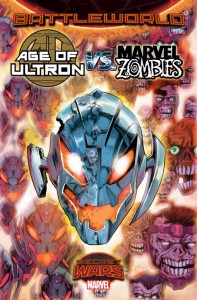 Let’s start with the first half of the SW tie-ins: Sometimes, 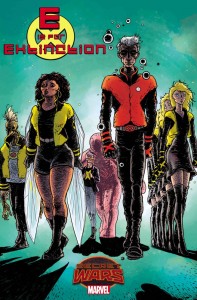 the title says it all, and Age of Ultron vs. Marvel Zombies is exactly what it advertises: in the deadly lands beyond The Shield, the killer robots and undead superheroes battle it out, and citizens of Doom’s world who break its laws get exiled there, to try and survive as best they can. Besides the title antagonists, Robinson throws in Tigra and an old-West incarnation of Hank Pym as viewpoint exiles, and gives Pugh plenty of widescreen opportunities to show off his solid, mainstream art: three double-page battle splashes, providing just the sort of eye candy readers of a book like this are looking for. E Is for Extinction looks at a section of Battleworld from a timeline where the early Grant Morrison/Frank Quitely version of the X-Men saw Charles Xavier kill himself to defeat Cassandra Nova; now, ten years later, the new generation of students is grown up, and Scott and Emma are seen as middle- 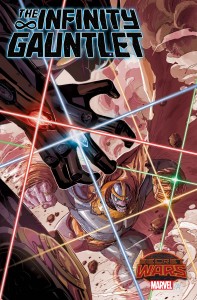 aged and out of touch (Scott is balding and has a small pot belly, and Emma’s white dominatrix costume does more to show her cellulite than her curves), and the kids, led by Magneto, are in control. Villalobos does a nice job on the art, giving it Quitely’s otherworldly style but making it grittier, as if he’d been mixed with Geof Darrows; this is arguably the best tie-in of the week, a good use of the alternate-timeline concept to tell an interesting story. Infinity Gauntlet is, of course, about villain Thanos trying to get that accessory’s set of gems, and focuses on a family of refugees in an Earth city devastated by an annihilation wave, whose mother is a member of the Nova Corps. It’s not bad, but it’s now halfway through the series, and only a couple of the gems have shown up. Too, the version(s) of Thanos here don’t seem to match the “real” version in the Secret Wars main series, leading to a lot of confusing questions about how this story could connect to 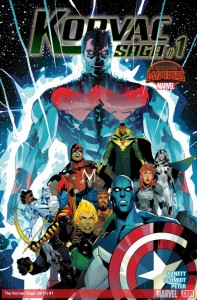 it, and how an artifact as powerful as the Gauntlet could coexist with Doom’s patchwork planet. Korvac Saga has something of the same problem: the original Korvac was an ultimate cosmic power, but having that here would screw up the Doom/Battleworld concept, so instead he’s just Michael Korvac, the lord of a small kingdom, ruling it with the help of the Guardians of the Galaxy; they’re competing with a neighboring kingdom ruled by Simon “Wonder Man” Williams, whose own helpers are a version of the Avengers. Writer Abnett knows his way around cosmic stuff (he and sometime-partner Andy Lanning kept Marvel’s space characters alive practically by themselves through most of the ’00s), so things will likely get more exciting and interesting soon, although Schmidt’s loose, perfunctory art style doesn’t do the story many favors. 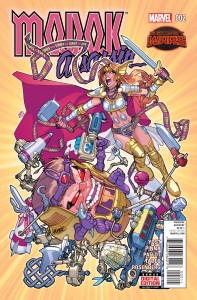 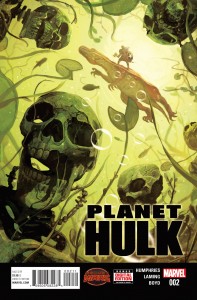 The rest of the tie-ins: M.O.D.O.K. continues to be a hoot, a light-hearted tale of assassins and death, as a Thor/Angela has been shot out of the skies and dropped in front of our… well, “protagonist,” not “hero.”  This is a problem, as (a) she thinks he attacked her, and immediately tries to kill him, and (b) all of his programming is telling him to kill her back, but he’s inexplicably smitten by her charms. Pinna continues to do a good job balancing the action and the comedy, although the David LaFuente covers are so cool-looking that they keep making me wish he’d drawn the whole book.  Planet Hulk has a Devil Dinosaur-riding version of Steve Rogers searching in “Greenland,” where all 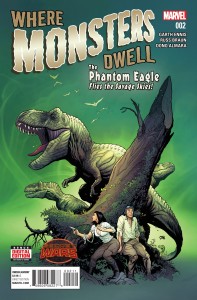 the Hulks and other gamma-radiated creatures live, for his friend Bucky, and running into Doc Green, who becomes his guide. Ok, and the different Hulk-like creatures that inhabit the landscape are fun, although there seems to be more world-building than actual plotting going on so far.  Where Monsters Dwell has a post- WWI Phantom Eagle (Marvel’s American flying ace) kicking about a Monster Island-infected South Seas with an independent woman who’s immune to his dubious charms, for reasons which become obvious on the last page; it’s light Ennis, but fun, and as always Braun is a good match 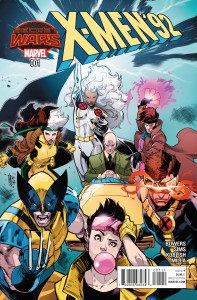 for him (although this really seems to have nothing to do with the whole Battleworld concept, and could just as easily have been a stand-alone mini-series…). Finally, X-Men ’92 takes the characters and world of 1992’s X-Men #1, and has them in a kingdom ruled by “Baron Kelly” (the mutant-baiting Senator Kelly in regular continuity), who’s established a “Clear Mountain Institute” to rehabilitate mutant villains. The X-Men go to check it out, and find it run by someone they’ve never met: Cassandra Nova. Uh-oh….   This is another comic that makes good use of the alternate-timeline concept, and promises to tell a good story: just the right place to end this week’s SW-related offerings. 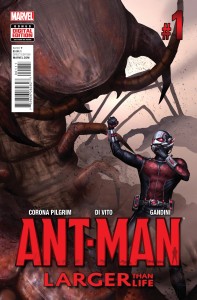 The other Marvel offerings I thought were worth noting. Ant-Man: Larger Than Life has a new lead story that looks at Hank Pym very early in his career, as he’s still trying to figure out how to communicate with insects, and 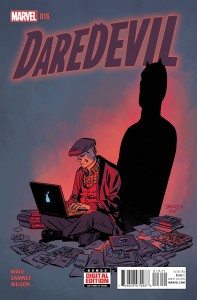 is an effective introduction to the character, both accessible and friendly to potential fans of this summer’s Ant-Man movie; the book is rounded out with reprints of the first two Ant-Man stories, both by Stan Lee and Jack Kirby: the seven-page origin from Tales to Astonish #27, and then the thirteen-page sequel from TTA #35. They’re definitely of their time (in the sequel, he battles Commie spies), but still hold up well — it’s Lee/Kirby, after all — and, since the price of the comic is just $3.99, are a cheap bit of history for those who’ve never read them.  Daredevil offers Waid and Samnee windingdown their association with Matt Murdock, as he’s forced to turn to The Kingpin to battle the damage done by his latest foe, The Shroud, leading to the kind of extended plot/counterplot chess 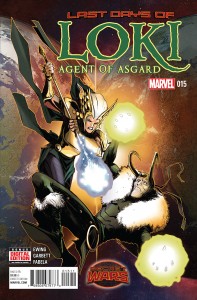 match those two rivals always engage in. Waid’s very good at this kind of thing, managing to keep the reader off-balance with developments while Samnee’s crisp art, as always, uses a series of smart choices to dramatize and enhance it. Finally, Loki continues its reinvention of that character, as she (!) has become the god of stories, and we get the origin of Verity Willis, who turns out to be intimately connected with the Walt Simonson run on Thor;  meanwhile, the other Asgardians battle Evil Old Loki in the midst of the universe-ending events/Ragnarok just prior to Secret Wars. If you’ve been following this title for the last two years, you know it’s an affectionate, well-written and smart-looking take on the character, and so will want to stick around for the finale next issue. 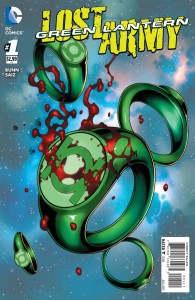 The three DC debuts for the week, although none involve 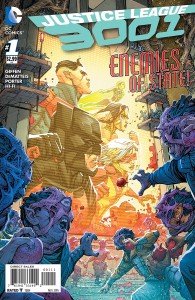 new characters, and two are straight relaunches. Green Lantern: The Lost Army is Green Lantern Corps crossed with The Lost Platoon, as John Stewart, Guy Gardner and a number of other GL members end up, well, lost, in uncharted territory with no easy way to find their way back, and battling various monsters; it offers competent, straight-ahead superhero action. Justice League 3001 is, duh,  a continuation of Justice League 3000, with Giffen and DeMatteis, the writing team from 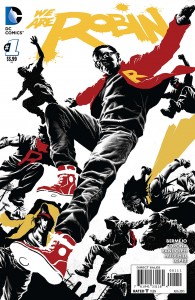 the fondly-remembered ’80s JL comics, looking at future versions of the same characters. Porter offers solid art, and the writing has the same deft combination of snarky dialogue and character-centric drama that the writers have been offering for years,  a known quality appreciated by a lot of readers. We Are Robin has various urban street kids in Gotham City banding together, Guardian Angels style, in the absence of Bruce Wayne’s alter-ego; it’s not a new concept, but it has an appealingly-roguish teen as its main character, and Corona’s art is fluidly cartoony enough to make it worth a look. 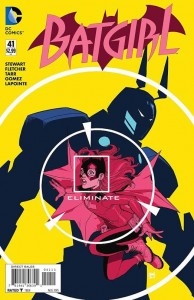 Two other DCs of interest: Batgirl starts a new storyline that ties it much more closely into current DC continuity, as Barbara’s father becomes the new armored-up, Iron-Mannish Batman and the city wants him to bring in all 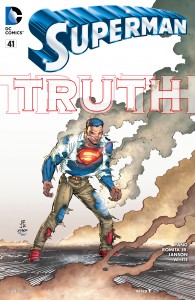 vigilantes… like her. This is told in the same bright-toned, stripped-down-intense manga style it’s been using since its relaunch, and told very well: not everyone reading this will like it, but everyone should try it. Superman, meanwhile, begins its version of how Clark Kent got outed as Superman.  New writer Gene Luan Yang (whose 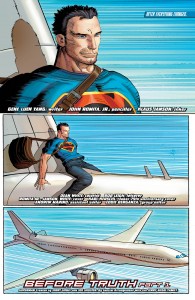 2006 graphic novel,  American Born Chinese, won an Eisner, and was a finalist for a National Book Award) is more than up to the task,  helped considerably by the continuation of John Romita Jr. on the art;  their first-page look at the current non-Clark Superman, complete with “S” T-shirt, a duffel bag and a scruffy beard, hitching a ridesshould be enough to establish their credentials (click on it, just to the left there, for an enlarged version, and see if it doesn’t make you want to run out, get the comic and read the rest of it). 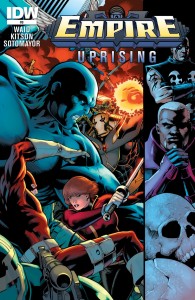 Not many indy books this week; Empire is interesting because it’s Mark Waid playing with Superman-pastiche alternate worlds: here, the Lex Luthor/Darth Vader big-villain avatar has won a war, killing all the heroes, establishing a worldwide empire and keeping the 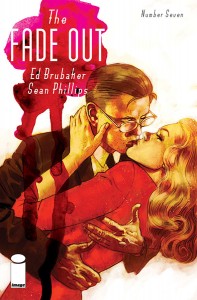 Superman stand-in, Endymion (Google it…) alive in a secret dungeon; the comic is about the various intrigues among his henchmen/ministers as they all try to control the world. It’s very well thought out, with Kitson supplying the kind of smoothly-detailed, clear art that lets readers absorb the story effortlessly.  The Fade-Out has a similar ease of reading; Brubaker and Phillips’s Hollywood-noir tale of murdered starlets, blacklisted writers and morally-conflicted male leads zips by like some ’40s tough-guy film, the kind you’d find on TMC late some Saturday night, making it an easy choice to conclude this list.

With 40 years of experience in comic reading, collecting and reviewing, English Professor Phil Mateer has an encyclopedic mind for comics. Feel free to ask Phil about storylines, characters, artists or for that matter, any comic book trivia. He will post your questions and answers on the AABC blog. His knowledge is unparalleled! He is also our warehouse manager, so if you are looking for that hard to find comic book, ask Phil!
View all posts by Phil →
This entry was posted in New Comics, Reviews and tagged Age of Ultron, Ant-Man, Batgirl, Daredevil, E Is for Extinction, Empire, Green Lantern, Infinity Gauntlet, Justice League 3001, Korvac Saga, Loki, M.O.D.O.K. Assassin, Marvel Zombies, Planet Hulk, Secret Wars, Superman, The Fade-Out, We Are Robin, Where Monsters Dwell, X-Men '92. Bookmark the permalink.