We start to get the second issues of all the Convergence mini-series this week, and I’m even more impressed with Chip Kidd’s alternate-cover designs (with the #2’s the “other halves” of the #1’s), and the way the original artists of the cover images are given prominent credit.  DC’s including eight-page previews of their post-Convergence new and returning titles, a different one in every book; check the reviews here to see which preview can be found in which title.  Meanwhile, the other comics companies haven’t been idle: Marvel’s got Secret Wars #1 and a new Squirrel Girl, while new issues of Afterlife With Archie,  The Wicked and the Divine and Richard Corben’s Rat God enliven the indy books. Let’s look…. 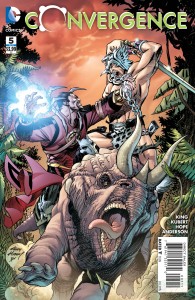 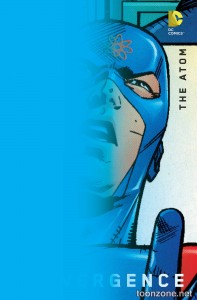 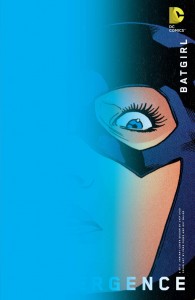 Convergence itself, now over half over, has Deimos vs. Brainiac, leading to a number of unexpected and tragic consequences (let’s just say that, if the events here stand, 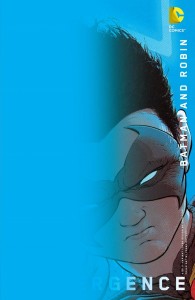 Mike Grell won’t be getting a lot of future royalties on the uses of his Warlord characters…), and a last-page game-changer.  It also has Andy Kubert art, which ups the visual quality considerably; there’s a full-page splash of Travis Morgan astride a triceratops that helps to remind us just how much talent all those Kubert family members possess. The Atom continues its revival of the Ryan Choi character, alongside Ray Palmer, and follows a pattern common to almost all the other books this week: a battle, followed by an earthquake, followed by a conclusion that seems to solidify the status quo of the city (I wonder whether DC’s planning on keeping the Brainiac Planet with all these characters in different cities after Convergence is over…?). The eight-page preview is of the next regular Green Lantern book, 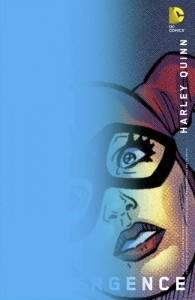 written by Robert Venditti and with pencils by Billy Tan. Batgirl features both the Stephanie Brown and Cassandra Cain versions of the character (although, as it develops, it’s really Stephanie’s story), along with Red Robin and Catman, with Gorilla Grodd thrown into the mix; it ends with a clever twist, and a conclusion that fans of Brown, especially, should appreciate. The preview is of one of the most intriguing new DC debuts: Prez, involving a teenage girl who’s about to become President of the US; it’s written by Mark Russell with pencils by Ben Caldwell, and is weird enough to be worth checking out – even though these kinds of quirky series don’t have a great track record in sales (see: Green Team, another revival of a wacky ’70s Simon and Kirby character). Batman and Robin has Bruce and Damian 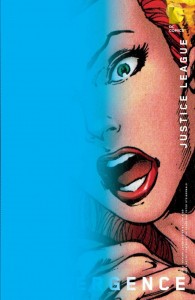 Wayne, plus the Jason Todd Red Hood, against a bunch of the Extremists; it’s got maybe the best-looking art of all the books this week, courtesy of Cowan, Janson and Rubinstein (and the Frank Quitely image blown-up for the cover is pretty great, too), and a long, well-constructed fight scene with yet another satisfying conclusion (is it too much of a spoiler to say that almost all the good guys win in these books?). The preview is of the new Omega Men, with Kyle Raynor facing those title characters and having a very bad day; it does its job of making readers want to read the actual book to see what happens next.  Harley Quinn has our… heroine? Let’s say main character… against Captain Carrot, with Pugh delivering a more-than-decent script of

that clash (the title is “Rabbit Season,” but it’s Harley who gets to play Bugs Bunny) and Winslade doing a very good job of making the cartoony characters look just realistic enough, and the realistic characters just cartoony enough. The preview is of the Garth Ennis/John McCrea Section Eight, a book about those spinoff pseudo-superhero characters from the late, lamented Hitman, and it’s fully as weird, grimly funny and borderline-disgusting as you think it is.  Justice League has an all-female version of that team (Supergirl, Mera, Zatanna, Vixen, etc.) fighting the psychotic/mean Aquaman from the Flashpoint universe that led into the current new-52 one; the preview is of the new Detective 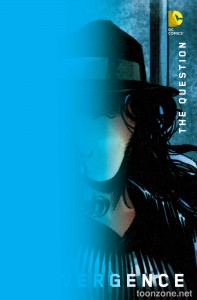 Comics, with Bruce Wayne presumed dead and Batman now another, almost-unrecognizable longtime character in an exoskeleton.

Five more to go! Nightwing/Oracle has Simone concluding the adventures of Dick Grayson and a still-wheelchair-bound Barbara Gordon against the savage versions of Hawkman and Hawkgirl; it’s got great-looking Duursema art and an ending that fans of those characters will love. The preview is Midnighter, with a script by Steve Orlando and art by Aco, and is a decent-enough version of that Wildstorm Batman avatar. The Question offers the Renee Montoya version of that character, along with Batwoman 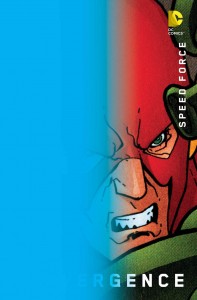 and The Huntress, in the conclusion of a fight between the Harvey Dents of two cities; as you might expect of Rucka, it’s mostly gritty street-level stuff, with the least reference to Conversion events of any of the comics. The preview, Starfire, is written by the ongoing Harley Quinn team of Jimmy Palmiotti and Amanda Connor, with art by Emanuela Lupacchhino, and looks like a more upscale version of that copper-skinned New Teen Titans alien than we’ve been getting for a while.  Speed Force features the Wally West Flash, with two speedster kids, plus Fastback from Captain Carrot’s Zoo Crew, against the Flashpoint Wonder 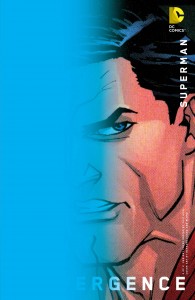 Woman; like Winslade over in Harley Quinn, Grummett does a good job of integrating the cartoony turtle and the “real” characters of Wally’s transplanted Gothan City. The preview is of Green Arrow by Benjamin Percy (script) and Patrick Zircher (art).  Superman offers, scattered among fights with the Flashpoint versions of Captain Marvel and Superman himself,  a World’s Finest team-up with the Thomas Wayne Batman (who’s, you know, dead over in the actual Convergence title, but let’s not quibble), and a big moment in the Lois-and-Clark relationship; the preview is of Doomed, a book about a Metropolis teen infected with the Doomsday virus; it’s written by Scott

Lobdell and drawn by Javi Fernandez, and Lobdell’s efficient-if-basic scripting hits just the right high points to, maybe, make this one of the more popular new DC titles. Finally, Titans offers an actual and long-in-coming happy ending for Arsenal, as the Titans battle the Extremists (no, not the Extremists from Convergence: Batman and Robin; the other Extremists…); Wagner has a solid, unflashy-but-clean-and-attractive style that reminds me of Sal Buscema. The preview, logically enough, is of the new Red Hood/Arsenal book, with, again, Scott Lobdell (who’s already done a number of issues of Red Hood and the Outlaws, so he’s familiar with the characters), and Denis Medri on art. 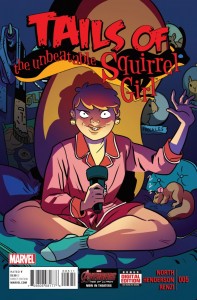 In with all that Convergence stuff, Marvel has their own big crossover event: Secret Wars #1, which is the culmination of something like 75 Jonathan Hickman Avengers books and tie-ins over the last two and a half years. This first issue is suitably apocalyptic: inside a cardboard-thick Alex Ross cover, the “regular” Marvel Universe and the Ultimates Universe, the only two left out of millions, collide… and well, yeah I kinda don’t think what happens is going to “last,” but it’s 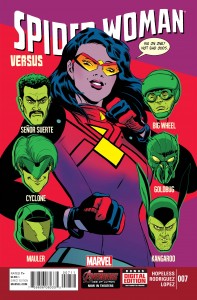 epic to watch, and Ribic’s art (plus Hickman’s writing; he has a way with super-big concepts like this) drives it home effectively. What will happen next? Will Marvel be reduced to publishing only this book each month? There are seven issues to go; tune in next time and see. Meanwhile, in the parts of the Marvel Universe not affected by all of this drama, The Unbeatable Squirrel Girl #5 is a stand-alone pastiche wherein, while the title character’s outside with the Avengers battling bad guys, a handful of civilian hostages (including Doreen’s roommate) exchange possible origins and stories about her, giving Erica Henderson a chance to show off her Kirby, Sprang, McFarlane and Miller imitation chops, among others; as always, it’s, charming, stylish and a lot of fun. Spider-Woman  continues to investigate a shadowy mastermind who’s been blackmailing D-list

villains (bonus points to anyone who can name the hero who first fought each of the six on the cover, and no fair Googling them…) by threatening their families; it’s got a logical but completely unexpected swerve at the end, helping to cement its status as a brainy, shiny-hued comic that’s become a worthy part of the Hawkeye/Daredevil/She-Hulk (and, come to think of it, Squirrel Girl) modern Marvel style. Meanwhile,  Amazing Spider-Man just keeps chugging along, with the Slott/Gage/Ramos team dependably entertaining, as Peter Parker and his supporting cast deal with the corporate-sabotage specialist The Ghost, who’s been hired to, literally, bring down Parker Industries (and a glance at the cover should indicate whether he’s successful); there’s also a conclusion to the Black Cat back-up story that’s been running the last couple of issues. 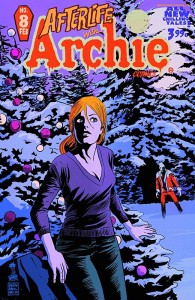 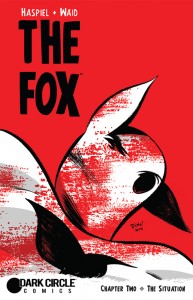 Minimum Wage: So Many Bad Decisions #1 (of 6) — Creator: Bob Fingerman

A quintet of interesting indy books — Archie might not be the first publisher that pops into your head when you hear that term, but they’ve been expanding their line in a

number of unexpected and interesting ways lately.   Afterlife With Archie was their first big success, a zombies-in-Riverdale book that’s considerably more horrific, adult and nuanced than you might expect; this issue is actually more about ghosts than zombies, with sly tributes to a number of movies like The Shining and The Haunting of Hill House, and while in some ways it’s a 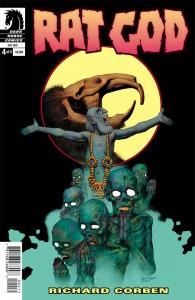 catch-your-breath episode, it’s a good example of the pleasures of the series, especially Francavilla’s creepy, affecting art. The Fox is also Archie, part of their new “Dark Circle” line of gritty heroes; it’s Dean Haspiel channeling his inner Jack Kirby and Alex Toth influences, with Mark Waid helping with the scripting, and it’s a cool-looking and energetic book. The Wicked and the Divine continues Gillen and McKelvie’s tale of god-avatar young adults, blessed with 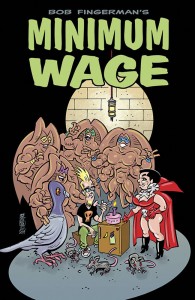 powers and fame but doomed to burn out on them after only two years, and it’s as stylish as ever, while Rat God sees Richard Corben being his dependably Lovecraftian old self, with a weird tale of creeping horror that wears its pulp influences proudly. Finally, Minimum Wage is back for a “second season,” with its divorced, twenty-something cartoonist trying to navigate the lower-end New York City dating scene in the ’90s, and helped considerably by Fingerman’s eye for satire, caricature and the subtle ins and outs of relationships in the big city.

With 40 years of experience in comic reading, collecting and reviewing, English Professor Phil Mateer has an encyclopedic mind for comics. Feel free to ask Phil about storylines, characters, artists or for that matter, any comic book trivia. He will post your questions and answers on the AABC blog. His knowledge is unparalleled! He is also our warehouse manager, so if you are looking for that hard to find comic book, ask Phil!
View all posts by Phil →
This entry was posted in New Comics, Reviews and tagged Afterlife With Archie, Chip Kidd covers, Convergence, Divergence, Minimum Wage, Rat God, Secret Wars, Spider-man, Spider-Woman, Squirrel Girl, The Fox, The Wicked and the Divine. Bookmark the permalink.