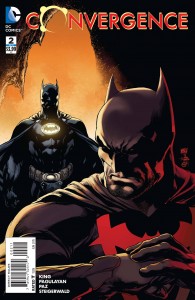 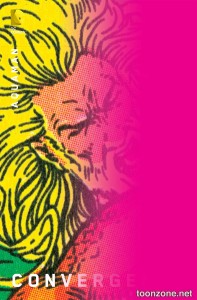 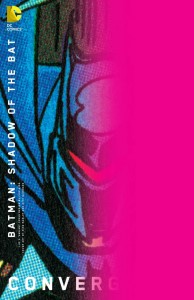 So, here we are again: another week with DC’s two-month weekly Convergence event. Quick plot recap: some multiversal version of Brainiac has created the sentient 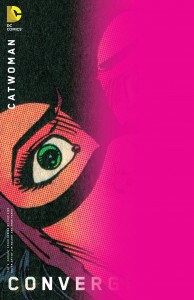 planet Telos and deposited a bunch of cities taken from throughout DC’s history on it, to fight it out until only one is left: that one’s universe gets to survive, and everybody else is toast. In addition to the main Convergence book, there are ten tie-in titles each week, each a two-issue mini-series focusing on particular charactrers and battles. Last week, the focus of all ten tie-ins was a Gotham City from right before the New-52 books began (so, DC characters from three or four years ago). This week, it’s  Metropolis from right before the Zero Hour reboot: meaning everyone’s as they were in 1994, twenty years ago; if you were a DC fan back then, here’s Aquaman with a hook on one arm, a Batman who’s just recovered from Bane breaking his back, a Supergirl who’s actually sentient

protoplasm and thinks Lex Luthor is a good guy, etc. They’re being set up to fight a couple of neighboring cities: one a version of San Diego with all the Wildstorm characters (Deathblow, Gen13, etc.), one that’s Electropolis (where Lady Quark, who was in the JLA for about ten minutes, came from), and another, more-future Metropolis from the Kingdom Come mini-series. Got all that? OK, then….

I’d expected the main Convergence title to be like Crisis on Infinite Earths, throwing dozens of timelines and alternate-reality characters at the readers. There’s a little of that (the characters from the Stan Lee Just Imagine books go up against the killer-robot hybrids from the Futures End 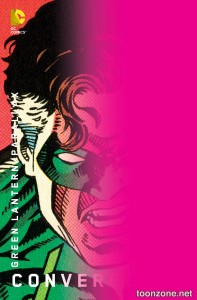 universe, with predictably grim results), but mostly, like the first issue, we’re following the Earth-2 heroes, who’ve moved out of their own weekly mini-series to this one, and, having shown up without a city, are trying to play spoilers to Telos’s Hunger Games-ish agenda. Fair enough, but it’s disappointingly linear and slow-moving for a comic that should have been gonzo, throw-everything-at-the-wall pyrotechnics. The ten tie-ins fare better; there’s still the Chip Kidd trade dress for the alternate covers to admire (magenta fades this week, as you can see from the thumbnails), and the nostalgia of seeing old friends from two decades ago. Aquaman, as already mentioned, has just lost a hand, has been defending a domed Metropolis against street thugs for a year, and now, the dome

dissolved, has to face one of the Wildstorm characters.  The Richards art is handsome enough, but the Bedard script is saddled with Deathblow as an opponent, which means grim ‘n’ gritty Aquaman. Too bad they couldn’t have gotten Peter David, who wrote the title back then, and might have been able to balance the two worlds better. Shadow of the Bat has both the Bruce Wayne and Azrael versions of Batman teaming up, mostly against Gothan thugs like Tobias Whale, although at the end the dome drops and their actual opponents are another Wildstorm group: Wetworks. Hama and Tan, a smooth, easy-to-like team, make this one of the better books.  Catwoman has a Selina from her full-body-spandex-costume phase (the one that’s most associated with Jim Balent and the term “boob socks”), and, like many of these first issues, is mostly about her life in 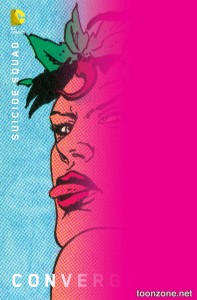 Metropolis under the dome until the very end, where she finds out she’s going to have to battle the Kingdom Come version of Batman; that’ll at least bring me back to look at the conclusion next month. Green Arrow is from the Connor Hawke era, although Oliver Queen is around too; they have their first meeting in this issue, and then by the end have to team up to fight a couple of oddly-familiar heroes from the Kingdom Come universe. The Morales art makes this one of the better-looking books for the week. Green Lantern has a Hal Jordan in full Parallax mode; when the dome comes down, he gets all those powers back, which looks like it’s going to bode very badly for the citizens of neighboring Electropolis, who attack immediately and then regret it; like a number of these tie- 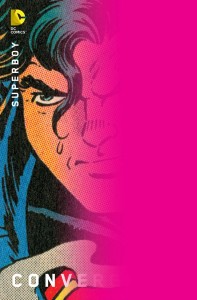 ins, it’s perfectly OK in both art and story, but not particularly special (although, if you have a soft spot for loony, white-templed, kick-ass Parallax Green Lantern, here you go…).

Halfway there: Justice League International is the version of that team with Martian Manhunter, Red Tornado, Captain Atom, Blue Beetle, Fire and Ice, and by the last page they’re facing off against eight of the Kingdom Come characters (all the ones not already taken for someone else’s comic)– so, like most of the other books, it’ll be back next month to see the actual fight. Suicide Squad should, in a just universe, have been written by that series’s longtime scribe John Ostrander, but instead we get 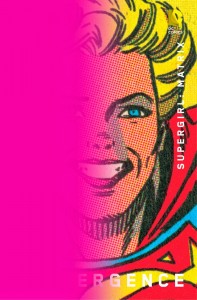 Frank Tieri; however, I have to admit that he turns in an interesting, twisty script involving Amanda Waller figuring out how to fight the Kingdom Come heroes by creating an intriguing alliance (which also means that, if you want to know the backstory on them, this is the book), and the Tom Mandrake art is just beautiful. That leaves the three Superman titles — Superboy/Supergirl/Man of Steel — none of which involve Clark Kent. Instead, Superboy is the 16-year-old clone created at Project Cadmus, and when the dome disappears he ends up facing the Kingdom Come versions of Robin and the Flash — and then, inevitably, ends the book about to face a much more powerful opponent. Supergirl is Matrix, the already-mentioned protoplasmic entity who thought she was Lana Lang for a 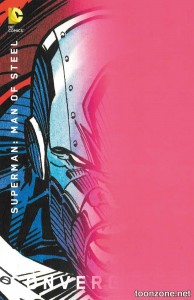 while, and is palling around with a red-headed Austalian version of Lex Luthor (yes, comics 20 years ago were as weird as they are now). Fortunately, this book is scripted by Keith Giffen, with his tongue firmly in his cheek, and it turns out to be a lot of fun, as Supergirl doesn’t-quite-fight Lady Quark and Lord Volt, and there’s a lot of snarky dialogue and humor — something sorely lacking in most of the other Convergence entries — cemented with a last-page appearance by… well, read it and see, although I’ll say that it’s a character that’s not out of place in a Giffen book.  That leaves Man of Steel, which features the John Henry Irons character with his niece Nat; the Simonson/Brigman team, which collaborated on Power Pack ‘way back in the day, is entertaining (the featured foes are Gen13, so another pack of kids with powers), although it would have been nice to see Christopher Priest, the only writer who ever showed much of a handle on Steel and his cast back during its original run, get a chance to revisit the characters.  Next week: DC moves the time machine back ten more years, to 1984, and looks at heroes from just before Crisis on Infinite Earths.… 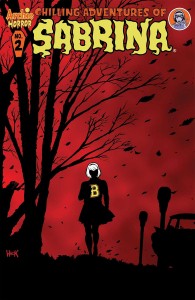 Who would have though two Archie books would lead the list of the non-Convergence books for the week? And yet, here they are: Sabrina, a sort of prequel to the zombiefied Afterlife With Archie, doesn’t have a lot of our heroine; it’s more about her nemesis, Madame Satan, coming to town and getting settled in to make trouble. The moody art and typically-adept script by Aguirre-Sacasa, who’s proven an 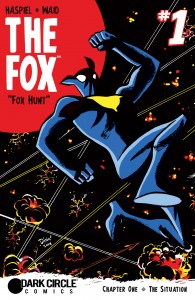 expert at transplanting these characters to a horror setting, make it both fun and, as the tile advertises, chilling. The Fox is part of the company’s Dark Circle line of gritty superhero books; it’s a continuation of last year’s mini-series, and Haspiel and Waid, as before, are a potent combination: Haspiel’s art looks like the product of some unholy union of Jack Kirby and Alex Toth (note the cover — and, as always, click on the thumbnails to see a much larger version), and Waid is able to smooth over the story’s rough edges and make the hyperstylized Silver Age affectations work surprisingly well; the result is well worth a look. 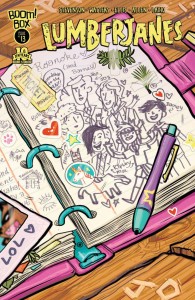 Two all-ages comics: Lumberjanes was one of last year’s breakout hits, with its cartoony, smart and very human look at a group of sort-of Girl Scouts attending a summer camp in a mysterious woods where everything, including 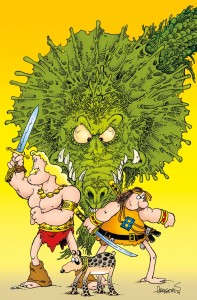 many of the camp personnel, are more than they seem; this issue offers an origin of sorts, as it flashes back to the first day of camp, and the first meeting of most of the characters. Groo is, as always, Groo, with its creative team that’s been together for three decades, and always delivers a very polished, funny and thoughtful comic; just the art by Aragones, a national treasure, should be enough (look at that cover, which I found without any logo, the better to show off its composition and obsessive, perfect detail) 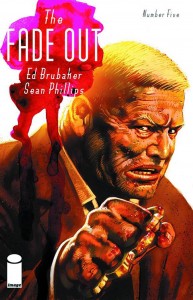 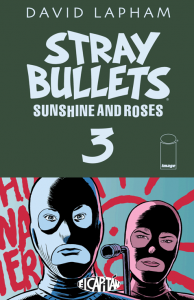 Three indy books that are decidedly not for children — The Fade-Out is old-Hollywood noir, with murdered starlets, tough-guy studio security heads, blacklisted (and hard-drinking) writers, and the kind of polished crime-novel plot and visuals we’ve come to expect from the 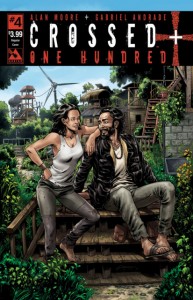 Brubaker/Phillips team. Stray Bullets is even noirier than that;  it’s been spending two decades somehow walking the tightrope between being a parody of over-the-top crime comics, with generous helpings of sex, violence and general bad behavior, and just being a really good crime comic. Finally, Crossed Plus One Hundred is Alan Moore’s century-later look at society trying to rebuild in a world with the Crossed; this issue finally pulls together a timeline of the last ten decades in the American Alleghenies, along the Mississippi River, with settlements springing up and the infecteds slowly dying out… except that something mysterious is happening with them, and as the heroine heads off into the mountain wilderness to investigate it’s clear that something very Alan Moorish-bad is coming…

Two Asgardian books to round out the week: The whole Loki run, from Journey Into Mystery on, has been a pleasant surprise, and here climaxes in a clever reimagining of the character, one that harkens back to the Gillen era, makes the God of Lies into something related but not quite the same, and just might give him a chance at a happy ending after all. Thor, meanwhile, continues its adventures of a female goddess of 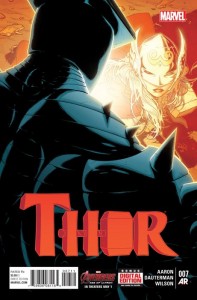 thunder. This issue makes it look like the woman in question is Roz Solomon, S.H.I.E.L.D. agent and the male Odinson’s sort-of girlfriend, which has caused a run on the last volume of Thor’s 12th issue (her first appearance)…. but the big reveal of who’s under the helmet isn’t until next issue, and so the Roz stuff here seems too on the nose, more of a feint than a true clue — and yet, the last-panel cavalry appearance eliminates quite a few other candidates (my money’s still on Jane Foster; she was eliminated early, but that’s just the sort of Agatha Christie-like twist that would suit Aaron’s plotting. Guess we’ll know in a couple of weeks…).

With 40 years of experience in comic reading, collecting and reviewing, English Professor Phil Mateer has an encyclopedic mind for comics. Feel free to ask Phil about storylines, characters, artists or for that matter, any comic book trivia. He will post your questions and answers on the AABC blog. His knowledge is unparalleled! He is also our warehouse manager, so if you are looking for that hard to find comic book, ask Phil!
View all posts by Phil →
This entry was posted in New Comics, Reviews and tagged Aquaman, Batman, Catwoman, Convergence, Crossed Plus One Hundred, Green Arrow, Green Lantern, Groo, Justice League, Loki, Lumberjanes, Sabrina, Stray Bullets, Suicide Squad, Superboy, Supergirl, Superman, The Fade-Out, The Fox, Thor. Bookmark the permalink.