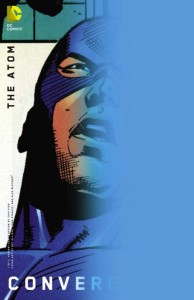 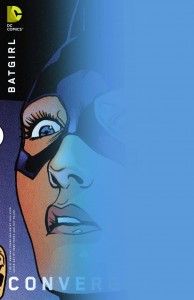 So, everyone knows the Convergence deal, right? DC’s in the process of moving its corporate offices from New York City (where they’ve been since the company’s origins in the 1930s) to Los Angeles — in fact, they locked the doors on the old building for the last time the day I’m writing this: Friday, April 10 — and has set up a “special event” to keep them from having to publish any of their regular books for two months, so  all the regular editors, writers, artists, etc. have time to settle in to the new location. This is that event: some meta- 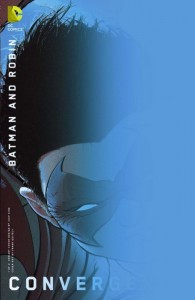 version of Brainiac has been snatching cities from all over time, space and the multiverse — a lot of versions of Metropolis, but also Gotham Cities, New York Cities, etc. — and for whatever blahblahblah reason has assembled them all on a massive planet, where their inhabitants have to battle for supremacy: the one city that “wins” gets to keep its world’s existence, and everyone else goes bye-bye. There’s a Silver Age Superman comics city, one with the Captain Carrot characters, one from most of the Elseworlds books, a Legion of Super-Heroes one, and so on, and on. Every week for the next eight, we’ll get an issue of the main Convergence book, plus ten issues of tie-in titles spotlighting the various inter-city fights, each a two-issue mini-series (for a total of forty tie-in books). Got all that? Ok, then….  Before 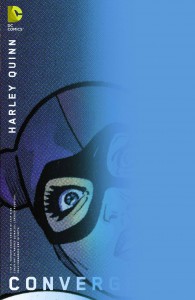 we start, a special shout-out to Chip Kidd, the designer of all the books’ striking alternate covers; he’s a world-class graphics artist, and the extreme character closeups and blue fades make this trade dress compelling and unique; they’re going to look great when all 40 are lined up on a wall — as you can see from the examples here.

Convergence #1 opens with a number of the current Earth-2 characters popping up on Telos, or Planet Brainiac, minus their city. They get the lowdown from a seemingly-omnipotent being who looks like he might be some new Brainiac version but is actually the avatar of Telos itself; with Brainiac absent, he’s in charge. The whole planet’s made up of thousands of cities encased in impenetrable, power-dampening domes, where the inhabitants, having been snatched from their own worlds, have been living for the past 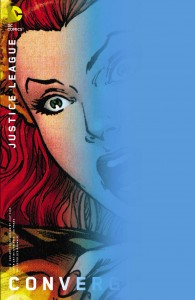 year. Now, Telos drops the domes, and gives everyone a simultaneous speech explaining that it’s now Hunger Games time. End of issue. May the one strongest city survive!

Whether you like the ten individual books this week will depend on two factors: the creative teams (duh), and the fact that all ten books are covering the same area of the planet Telos, where a just-pre-Flashpoint Gotham City and the Gotham City from Flashpoint itself are the main combatants, with a couple of other cities thrown in for minor variation. If you were reading DC comics five years ago, you’ll be familar with everyone; presumably, if you’re a fan of other eras you’ll have to wait for some other week.  As for the books, in alphabetical order: The Atom has a half-crazed Ray Palmer surviving in a domed Gotham City, and ends with a reveal that fans of the John Byrne Ryan Choi version of the character should

appreciate; the Peyer/Yeowell team provides straight-down-the-middle generic art and story. Batgirl involves both the Stephanie Brown and Cassandra Cain versions of the character (plus a couple of ex-Robins from that era), and the Steph version gets chosen to fight for the city (some of the books act like the entire cities are fighting, and some as though there’s more of an ordered pairoff; it’s not quite clear what the ground rules are….); fans of those two iterations of the comic should like this, especially with Kwitney’s clear affection for them, and Leonardi has a loose, Infantino-like line that’s a good match for this street-level group of Bat-associates. In Batman and Robin, Robin is Damian, and Jason Todd is back as the vigilante Red Hood, and art team Denys Cowan and Klaus Janson do an even better job at evoking the gritty, pulp-indebted Gotham streets, with the Dynamic Duo up against The Penguin, Killer Croc and similar thugs — until the dome disappears and a 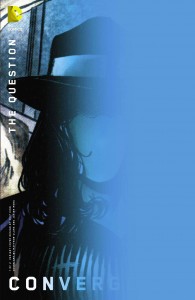 team of even-worse bad guys shows up from a neighboring city…. In Harley Quinn,  life under a dome has turned her sane, but then Telos makes his announcement and it turns out she’s one of the city’s champions — to the dismay of most of the city. Winslade always adds a little personal zing to his art, and the whole thing’s readable, anyway, although readers spoiled by the current version might find it a little flat. Justice League features… um, Jade, Vixen, Zatanna, Jesse Quick, Power Girl and Congo Bill, of all things, who then have to fight the scarred Flashpoint Aquaman.  Cifuentes is OK on the art, and I like the almost-all-women idea, but the writer is Frank Tieri, and it really needs a more character-centric writer like James Robinson or J. Michael Straczynski.

Whew — halfway home. Nightwing/Oracle will probably be the best of the lot for many fans, with its romance between a swashbuckling Dick Grayson and a wheelchair-bound Barbara Gordon; Simone turns in, as always, a very good script, and Duursema offers detailed, lush art: we get to see a savage Hawkman and Hawgirl battle the western JLA from the Elseworlds Justice Riders, then a lot of Barbara and Dick, and then the victorious Thanagarians show up to fight them, too — but with a twist. Nicely done all around, and a good example of how some of the other entries here could have been taken to a higher level. No worries for The Question, though, since it’s Greg Rucka doing his Renee Montoya character, complete with Two-Face, Huntress and another familiar hero who arrives on the last panel; 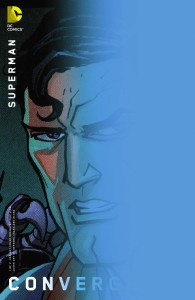 Hamner offers a similar street-level pulp style to Leonardi and Cowan, and it works well with this cast. Speed Force is the latter-Mark Waid-era Wally West, married and with twin kid speedsters, who has to face the Flashpoint Wonder Woman who’s a brutal Amazon warrior, but gets an assist from… well, a Roy Thomas blurb would say “the most unexpected speedster of all,” and when you read it you’ll know why I’m name-checking that creator. Superman involves Dan Jurgens writing about the Superman from his era — killed by Doomsday, married to Lois, was blue and electric for a while, etc. — up against most of the remaining characters from the Flashpoint universe, including his own counterpart. Jurgens and Weeks turn in a solid job; considering that the three best books this week — Question, Nightwing/Oracle and this — were all 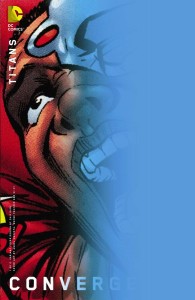 done by creators closely associated with those characters and this era, it’s a wonder DC didn’t set up more similar pairings. On Teen Titans, we get Nicieza and Wagner, which seems like a good bet (Nicieza has a lot of practice at teen groups), but has to focus on a Roy Harper who, at this point, has lost both an arm and his daughter and become a bitter vigilante, so it’s not a lot of fun. It is good to see these versions of Starfire and Donna Troy, and there’s an effective cliffhanger last panel.

That’s the Convergence lot for this week. Next week… who knows? (I’m trying not to read anything about the other time periods/pairings online; I want to be surprised each week…). 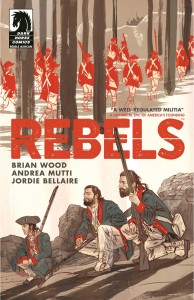 If you’re crossovered out, these two debut issues from other publishers are worth a look. Rebels is Brian Wood in Northlanders mode, except that instead of 800 AD Vikings he’s tackling the American Revolution, presumably with the same pattern of four or five-issue arcs covering different aspects of the conflict. This first one centers on the New Hampshire/Vermont area, starting in 1768 with a young man shooting at Redcoats 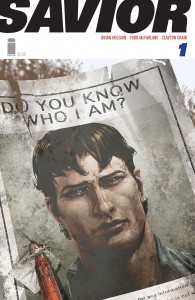 in the woods, and ending in 1775 with a visit from Ethan Allen, and it’s the typical well-researched, human-centered, thoughtful work we’ve come to expect from Wood, helped considerably by Mutti’s detailed, carefully-rendered sketches of rural and woodland life back then; I’d call it the best book of the week. Savior is longtime Spawn co-writers McFarlane and Holguin doing a modern, Christ-like miracle worker; the first issue’s quite a bit better than you might think, and the Crain art helps quite a bit, especially in a couple of money shots involving a plane crash, but whether this will catch fire or sputter out remains to be seen. 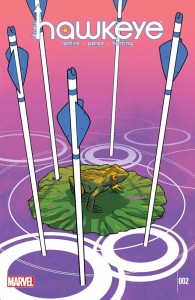 Five Marvel books, all under a year old — and one already ending. Hawkeye is the newest, although of course it’s a relaunch. Lemire offers a split narrative where, in the past, Clint and Barney Barton discover the circus for the first time, and we get an origin of sorts, while in the present Clint and other-Hawkeye Kate infiltrate a Hydra base and find some mysterious, 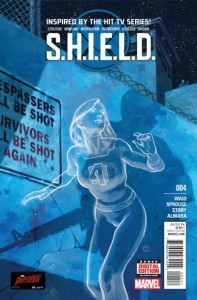 and deadly, children; as with the first issue, the best part is watching Perez adjust his style to the two eras, with a warm watercolor/pastel tone for the flashbacks, and then the crisp, clean-lined art we’ve come to expect in the modern-day title. Captain Marvel manages to be the best of the “Black Vortex” crossovers so far, one that doesn’t really require much knowledge of that event if you’re just a fan of this book; it’s got the same whip-smart characterization and plotting, and just-stylized-enough art, that we’ve come to expect of the DeConnick/Lopez team. Spider-Woman uses a similar combination of smart writing, stylish art, brisk action and humor, and is starting to grow on me 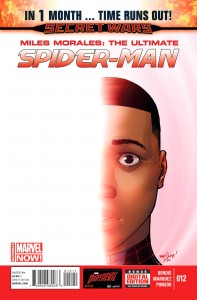 considerably; it’s a worthy successor to, say, She-Hulk or Secret Avengers, other books with smart, against-stereotype female leads. S.H.I.E.L.D. continues to have the advantage of Mark Waid scripts, utilizing the Phil Coulson and TV-show cast, although each issue so far has been concentrating on superhero guest-stars (the Invisible Woman in this one, as the cover reveals); it offers the rare treat of one-issue, self-contained and satisfying stories. Finally, Miles Morales concludes (with a cover eerily reminiscent of the Convergence alternates); it’s worth buying just as the end of an era  (for the first time in 15 years, there will be no Bendis-scripted Ultimate Spider-Man series) and because it offers, on its last pages, one of the first lead-ins to the new Time Runs Out/Secret Wars event beginning in just a few weeks. 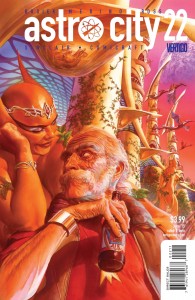 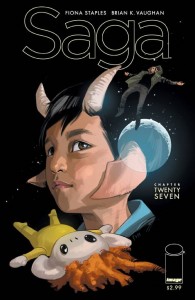 These all come under the category of stuff-I’m-buying-I’ve-already-talked-about: in Astro City’s case, for very close to two decades; this issue involves a

pulp/science fiction/adventure writer who’s much closer to his sources than he lets on, and offers a showcase for guest artist Merino. Meanwhile, the 27th installment of Saga sees Marco overdosing on a drug that causes its victims to spiral into their past, which presents an opportunity to give us some glimpses into his origins. Essential as always.  Nameless is Grant Morrison in full Lovecraftian unspeakable-cosmic-nemesis-elder-gods mode, and that should be all you need to know to buy it, too. Next week: more Converging!

With 40 years of experience in comic reading, collecting and reviewing, English Professor Phil Mateer has an encyclopedic mind for comics. Feel free to ask Phil about storylines, characters, artists or for that matter, any comic book trivia. He will post your questions and answers on the AABC blog. His knowledge is unparalleled! He is also our warehouse manager, so if you are looking for that hard to find comic book, ask Phil!
View all posts by Phil →
This entry was posted in New Comics, Reviews. Bookmark the permalink.