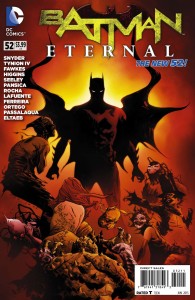 Let’s start this week with two DC books: an ending and a beginning. Batman Eternal finishes its one-year weekly run, and in decent enough fashion: 37 pages but still at its regular $3.99 price, with a number of different art teams. Was it worth buying 52 $3.99 issues ($207.48)? That depends on your passion for Bat-stories, but it certainly gave a number of supporting characters a chance to be in the spotlight, revived a couple that we hadn’t seen before in the New-52 universe, managed to hold together for most of its run, and arrived at a satisfying conclusion. Even if you bailed early (or never boarded the ship in the first place), this finale is worth a look. 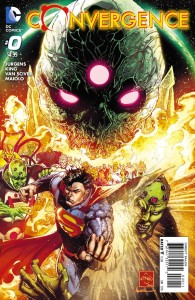 As a Bat-story ends, a Superman-centric one begins, and one with an even broader scope:  Convergence offers a framework, courtesy of a multiversal Brainiac collecting myriad cities (most involving the Man of Steel, but some not) of different timelines, that potentially brings together every comic DC’s ever published as its canvas. This issue offers “our” Superman, time-lost, encountering the world where those cities, um, converge, and establishes some of the rationale for the upcoming story; van Sciver’s a solid choice for artist here, with a straight-ahead adventure style that’s good at the superheroic posing and muscle-flexing that’s required, and enough flexibility to offer the 20 or 30 versions of the green-hued, computer-brained villain that DC’s published over the years, and make them all look suitable. Between the 30-page story and the extra material (listing 41 of the different worlds’ cities involved, from Golden Age to Silver Age to Elseworlds to future-history eras like the Atomic Knights’ or Kamandi’s, complete with first-appearance cover reproductions), this walks an effective tightrope between being a continuity freak’s dream, and hinting at an exciting story to come. If the job of a “0” issue is to create anticipation for the actual series, then mission accomplished; even a jaded fan should think this looks pretty cool. 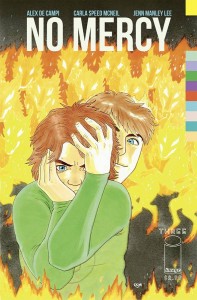 A couple of other debut issues: No Mercy is the one interesting indy book this week, about a group of college-bound students from across the country who sign up for one of those build-homes-for-the-poor-Central-Americans projects, to disastrous effect. De Campi proves adept at introducing the diverse cast of young characters, and their foreign handlers, and letting the reader get to know them before the inevitable horrible crisis occurs, but the real attraction here is the art, by the amazing Carla Speed McNeil: fans of her long-running Finder already know how good she is at combining realism and caricature to 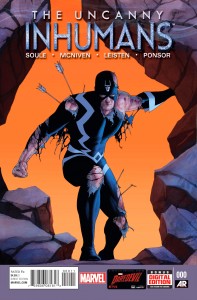 create easily-distinguishable, realistic-but-fun-to-look-at characters, but everyone else can find out by picking up this first issue and experiencing her talent for themselves. The Uncanny Inhumans is Marvel’s latest attempt to push that group of enhanced Kree/human hybrids; the Soule/McNiven team is top-tier, and it all looks great, but it’s very hard to work up any interest in the characters, especially when a reader has to deal with terrigen mists, complex royal relationships, a main character who communicates largely in mime, etc. Maybe it’s because I know too much about the corporate backstory here (Marvel/Disney, not having film rights to the X-Men — because Sony has them — are trying to play up the Inhumans as a similar group of multi-superpowered outcasts, which is why we keep getting comics about them, why they showed up on this season’s Agents of S.H.I.E.L.D. TV show, etc); the problem is that, the hopes of Disney VPs aside, you just can’t select a group of characters and assume that readers will click with them. Find a Claremont and a Byrne, give them no supervision and a couple of years to crank out cutting-edge, entertaining plots with approachable and interesting characters, and then we’ll talk…. 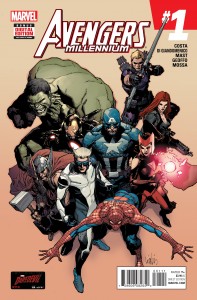 Your scheduling mystery for the week: why ship four different Avengers titles all at once, instead of spreading them out over the month, or at least waiting a few weeks until a certain movie debuts? Millenium is both the most geared to movie fans (with mostly the same team as will be on-screen) and the least interesting; Di Giandomenico’s sketchy style isn’t particularly suited to superheroics, and it’s a standard set-up-the-premise-and-come-back-next-issue plot. Uncanny Avengers is at least an ongoing title (although, with Secret Wars looming on the horizon, probably not for long), and Remender’s always entertaining, but it’s bogged down in a long High 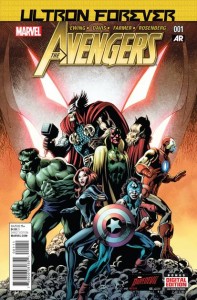 Evolutionary/Counter-Earth plot involving splitting up the team and following the individual characters as they try to survive, enlivened only by its introduction of a character who’s some kind of sibling to Quicksilver and the Scarlet Witch (who are being unhooked from Magneto and X-Men history and repositioned as the results of experiments by the High Evolutionary instead, for the same reason we’re getting a new Inhumans book).  Ultron Forever has the advantage of the movie villain, and one of those “pull an Avengers team from various time periods” groups: so we get both the current female Thor and the late-Simonson-era armored one, a future Captain America who’s the 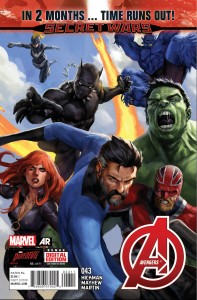 child of Luke Cage and Jessica Jones, an early-’60s Hulk, etc. Davis proves an inspired choice for the art, because his ’70s-Neal-Adams-realist style can handle heroes from any era and make them look good, and he’s got a vast knowledge of how everyone’s supposed to look, so that makes this the best of the new titles. Avengers, meanwhile, offers the entertainment of Hickman’s vast, rattling plot apparatus clicking into place, as Earth fights against the Shi’ar empire, planets shift in and out of phase, and a disgraced hero rises to (maybe) save the day: it’s the very definition of blockbuster popcorn entertainment, especially for those of us who’ve been waiting close to three years for it all to make sense. 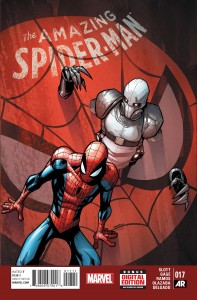 This has settled nicely into a groove, now that Dr. Octopus is gone, and the Spider-Verse thing is over: Ramos art, Slott/Gage scripts, character clashes, subplots, new villains (well, the corporate-busting Ghost, an old Iron Man bad guy who’s at least new to Spidey), and Peter Parker trying to juggle corporate and Spider-responsibilities just as hopefully and borderline-ineptly as ever. It’s an entertaining and comfortable mix; may it last a long time. 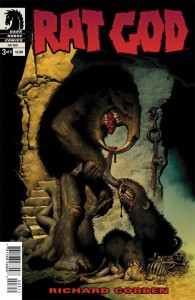 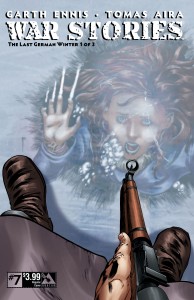 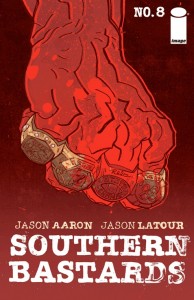 Your miscellaneous indy books for the week: Rat God is Richard Corben doing Lovecraftian-infused horror, which is really all you need to know. Similarly, War Stories is Garth Ennis doing his usual well-researched and sympathetic historic-combat stories; this issue is the first of a three-parter looking at German civilians and soldiers encountering Russian troops in the latter days of WWII. Aira’s art is sort of typical for Avatar — it’s professional, but basic, and not particularly interesting 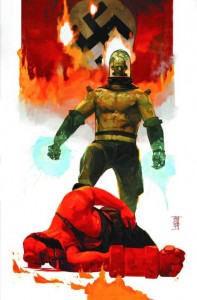 — but the script makes up for that, and fans of these Ennis period pieces (which should be everyone…) should like it. Southern Bastards, meanwhile, wraps its second arc, about the football coach who’s the series antagonist, and introduces the woman who’s apparently going to be the main character (the original main character having been killed off, in one of the better story feints of last year). Hellboy remains Hellboy, concluding the story of his first mission with the B.P.R.D., involving a 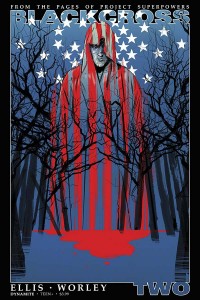 Nazi with his head in a jar on a robot body, cigarette-smoking cyber-monkies, goose-stepping zombies, and occult manifestations in the South American jungle — so, you know, business as usual for the Mignolaverse, filtered through Alex Maleev’s suitably-shadowy art (he’s such a good match for this material that it’s a wonder they haven’t used him sooner). Blackcross continues to be typical Warren Ellis, too, with its Pacific Northwest small town tormented by ghostly former heroes trying to claw their way back to reality; its dreamy, surreal 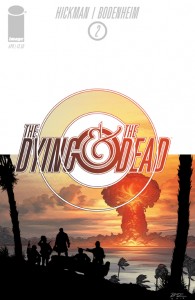 tone is similar to his recent Supreme: Blue Rose, but there’s a harder edge to the violence, and horror. Of the many covers, the Tula Lotay is the best. That leaves The Dying and the Dead, the second issue of the latest Jonathan Hickman book.  It’s got a gaggle of former Special Ops geezers getting the gang back together, in a plot reminiscent of the movie version of Red, except that they’re working for a mysterious City of albino immortals; the design and layouts are reminiscent of Nick Dragotta’s in East of West, although Bodenheim’s art is a both a little less precise overall, and a little more expressive in the faces. There’s a brisk cinematic quality to the whole thing that reminded me of good Mark Millar, especially a scene in a nursing home, and after two issues this continues to be a book worth reading.

With 40 years of experience in comic reading, collecting and reviewing, English Professor Phil Mateer has an encyclopedic mind for comics. Feel free to ask Phil about storylines, characters, artists or for that matter, any comic book trivia. He will post your questions and answers on the AABC blog. His knowledge is unparalleled! He is also our warehouse manager, so if you are looking for that hard to find comic book, ask Phil!
View all posts by Phil →
This entry was posted in New Comics, Reviews and tagged Avengers, Batman Eternal, Blackcross, Convergence, Hellboy, No Mercy, Rat God, Southern Bastards, Spider-man, The Dying and the Dead, Ultron, Uncanny Inhumans, War Stories. Bookmark the permalink.