We should probably note a couple of anniversaries this week: as you can see, this is my 300th “Stuff I Bought” review post; the first came out the week of January 5, 2007, which was when the AABC blog began — so that’s an eight-year anniversary for it, too. That very first review is no longer on the site (it had some kind of coding problem that was screwing things up, if I remember correctly, and had to be erased), but there’s a link to the second week’s reviews here.  If you’re wondering why it’s the 300th review but I’m listed as having 560-some posts, it’s because, for the first 175 weeks or so, I was breaking the comics into two separate posts — the stuff I read and liked enough to buy, and the stuff I read but then put back on the racks — but eventually it seemed easier to just review the “good” stuff. Also, there are around 75 “It Came From the Back Room” installments, looking at the various titles I was pulling alphabetically as overstock, and reviewing many of the histories of the main Marvel and DC titles along the way (a sample of one of those is here).  Anyone with lots of free time is encouraged to poke around in our archives and check everything out (including Dan Jacka’s couple of years’ worth of every-other-week columns that alternated with this one): you can get a nice snapshot of the last eight years of comics history from all those weekly recaps and covers… 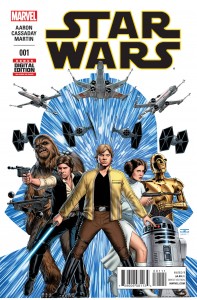 You have to admit, the pop-culture instincts of Disney and Marvel together are a potent combination, because this is an almost-perfect comic: Cassady is an inspired choice as artist: an A-list creator with a knack for both facial mimicry (so everyone looks just right, a frequent problem with movie and TV adaptations) and for widescreen splash panels with lots of space/tech hardware. Aaron, the writer, has an obvious love for the characters (the dialogue and throwbacks to the movies make that clear), and a breezy B-movie sensibility that knows how to play to the cheap seats, while the editorial decision to set this right after the “first” movie (Episode Four, for purists) makes it an old-school romp, with all the money characters on full display. Dark Horse produced a lot of good comics with this franchise, but if there had to be a Star Wars relaunch, this was exactly the way to do it. 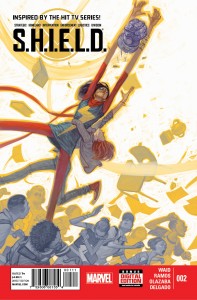 No other first issues of note this week, but a couple of second ones: S.H.I.E.L.D. benefits from the seasoned, entertainment-centered Waid/Ramos team, and guest-stars the new Ms. Marvel, who finds a kindred spirit in Agent Coulson (they bond over their extensive, geeky knowledge of the super-hero community and its hardware, while the spy agency team is undercover at her high school, 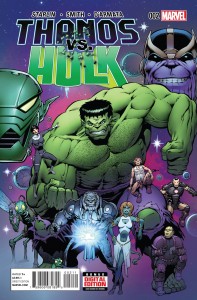 investigating a black-market racket in stolen super-villain gear), while Thanos/Hulk, while all-new, feels like a cosmic blast from the ’70s, as Jim Starlin both writes and pencils his signature bad guy in a universe and dimension-spanning free-for-all involving The Hulk, Bruce Banner, Annihilus, Pip the Troll and a number of others.  Starlin’s having a bit of a renaissance right now, with so many of his concepts (like the Infinity Gems) being used in the Marvel movies, and this mini-series offers a great chance for newer readers to appreciate his tight plotting and sure handle on his megalomaniacal, nakedly-ambitious and always-fascinating purple Titan. 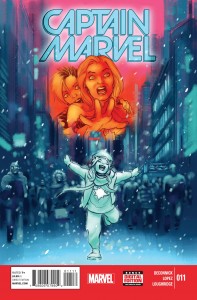 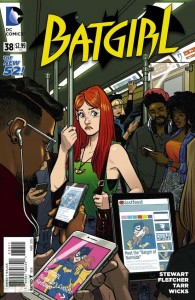 make it hum (DeConnick and her husband, Matt Fraction, got a gushing two-page spread in last week’s Entertainment Weekly — the one with Ant-Man on the cover, no less — as “The First Couple of Comics”). Meanwhile, Batgirl has been a new-school breath of fresh air, a thoroughly 21st-century look at the character with a just-grown-up enough, take-no prisoners style and art that offers a polished, cartoony meld of American and manga influences; together, they make the book a sleek, modern and reader-friendly attraction for both new and old readers. 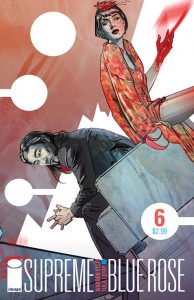 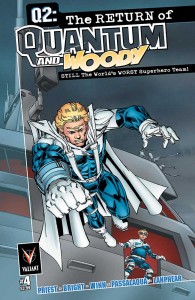 These four books are all linked because they’re either ending, or about to.  Supreme, on its penultimate installment, has trailed off a little in the story — it feels like one of those plots where the mysterious, atmospheric early parts are better than any eventual explanation (see Twin Peaks), although if I had to bet on anyone making it pay off in one mind-blowing final issue, Warren Ellis would be the 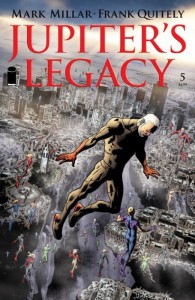 guy; in any event, it’s still worth buying just for the continuingly-beautiful Lotay art. Quantum and Woody, also with an issue to go, reveals quite a bit about what’s “really” going on (with many of Priest’s typical feints and counter-feints), setting the stage for a pyrotechnic set of confrontations in the final-issue endgame next month.    Jupiter’s Legacy, on the other hand, actually does offer a conclusion: the end of “Book One” (considering that this is the fifth issue, and the book debuted in April, 2013, insert your own Mark Millar lateness joke here), and, like Supreme,  boasts beautiful art; Quitely showed years ago in his X-Men run that he doesn’t need to draw costumes on his super-powered characters, because they all have such 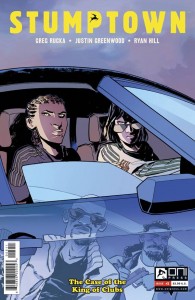 an other-worldly attractiveness, and sense of superiority (we’re always just slightly looking up at them from below, especially the women), that they’re obviously better than us, even in their civilian clothes, and Millar uses that to good effect here, providing a solid and just-satisfying-enough end to this first arc. Finally, Stumptown also finishes its current mini-series, as mysteries are revealed, friendships are strengthened, and it turns out the cops know what they’re doing — but not quite as much as Dex, the female private investigator who’s our main character. It’s another solid and satisfying ending, one that should bring readers back in a couple of months for the next extended story. 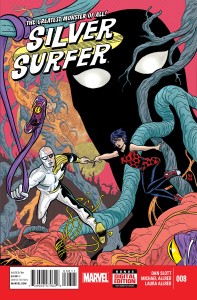 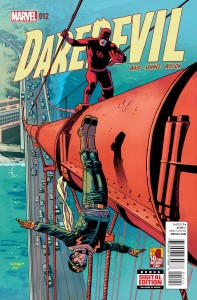 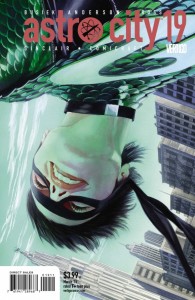 Of the rest, Silver Surfer stands out the most: Allred creates logical, surreal little pocket universes the way Steve Ditko did (and for all I know, still does), while Slott runs a smart riff on Candide, as his naive-but-not-stupid heroine navigates the universe with her smitten cosmic companion — and, in this first of a two-part story, stumbles across a planet of refugees from various destroyed worlds who fill her in on her companion’s checkered, and sometimes murderous, history as a herald of Galactus. 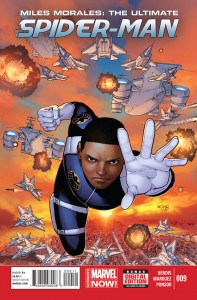 Daredevil is the second of two parts with the Stuntmaster; the plot’s a little too baseball insider-y, but is redeemed by Samnee’s art (especially in the big setpiece, a chase through crowded San Francisco streets between a motorcycle and DD, who’s pursuing it while standing up in a convertible, driving it with his billy-club attachments), and a small-but-significant last-page scene. Astro City is the middle of three parts (or more), a typically-poised and layered look at a woman who’s part of a long-standing, sometimes- 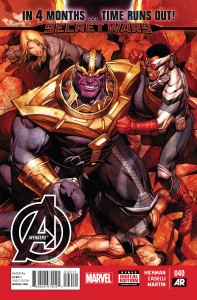 bickering, usually-happy superhero couple (think an older Black Canary, with Green Arrow) who’s dealing with getting older, losing a step and wondering what the point has been. Miles Morales has very little of the title character, as it offers the second of a two-part story about how his dad used to work for S.H.I.E.L.D, while Avengers keeps rolling towards its years-in-coming finale in a few months, as the Cabal gets trapped (Thanos, who appears prominently on the cover, only shows up on three or four pages inside) and the Black Panther and the Sub-Mariner have a final, and seemingly fatal (nudge, wink) confrontation.

With 40 years of experience in comic reading, collecting and reviewing, English Professor Phil Mateer has an encyclopedic mind for comics. Feel free to ask Phil about storylines, characters, artists or for that matter, any comic book trivia. He will post your questions and answers on the AABC blog. His knowledge is unparalleled! He is also our warehouse manager, so if you are looking for that hard to find comic book, ask Phil!
View all posts by Phil →
This entry was posted in New Comics, Reviews and tagged Astro City, Avengers, Batgirl, Captain Marvel, Daredevil, Jupiter's Legacy, Quantum and Woody, S.H.I.E.L.D., Silver Surfer, Star Wars, Stumptown, Supreme Blue Rose, Thanos vs. Hulk, Ultimate Spider-man. Bookmark the permalink.