With a movie this summer, of course Ant-Man needs a new ongoing series, and this is a respectable shot at a debut issue. Spencer, who’s a clever writer, is going for a little bit of a Hawkeye feel here, with his good-hearted, regular-guy rogue of a main character, except that where Clint Barton’s problem is his scruffy overconfidence, Scott Lang’s is the opposite: as an ex-con and a divorced father, he knows exactly how normal and scruffy he is, and sees that as a failure, despite his heart, problem-solving abilities and skill set all being more than competent. His one meaningful relationship has always been with his daughter, and Spencer uses that to good effect to make him sympathetic. Rosanas’s art looks solid enough, although the nature of this first episode doesn’t give him much action, or any splash panels, to show off; we’ll have to wait for subsequent installments to see what he can really do. 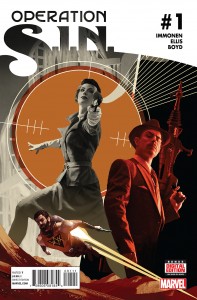 This is a media tie-in, too, although you’d never know it from the cover; it looks like some god-awful late Original Sin tie-in. In reality, though, it’s an Agent Peggy Carter story, set in the late ’40s, and Kathryn Immonen’s script makes her a relatable, super-competent ex-spy who ends up working with Howard Stark (Tony’s father) in Russia. It’s a good beginning, and since the character’s TV show debuted this week to good reviews, a number of curious fans might want to check it out — if there was any indication on the freakin’ cover that it ties in to that show! Geez, if I was the creative team on this book, wanting its first issue to do well, I’d be furious at whichever idiots in Marvel editorial slapped an anonymous, generic cover on this instead of trumpeting the TV connection…. 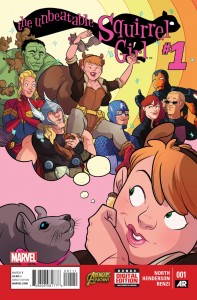 One of last year’s most encouraging trends was the debut of a number of bright, good-looking kid- and girl-friendly comics (from Lumberjanes to Ms. Marvel to Gotham Academy), and this is a worthy addition to that group; in fact, its crisp, indy-looking art, breezy adventure style and refusal to use standard good-guy-vs.-bad-guy plots should make it attractive to anyone who’s liked any of those other books, especially Lumberjanes. Give it a look, and encourage Marvel and the other companies to keep producing more of these, instead of the generic, boring super-stuff that’s too often their default setting. 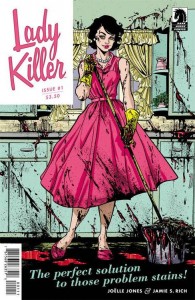 Sometimes, a comic’s cover tells you everything you want to know, and this first issue’s portrait of a primly-dressed, early-1960s, June Cleaverish housewife in pearls calmly mopping up the bloody remains of a murder signals its suburban hit-woman concept exactly. This isn’t going anywhere that, say, Jennifer Blood hasn’t already been, and it remains to be seen if the character’s juggling of homicide and housework won’t get old after a few issues, but this initial one works just fine, especially with Jones’s detailed, attractive art and pitch-perfect sense of the period’s styles and images making it look so good. 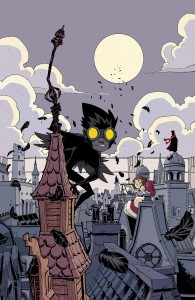 Yet another quirky, kid-friendly adventure book, set in a vaguely Victorian-era city where the rich and well-off live behind walls and armed guards, while the poor scramble through the maze of cobbled streets and close-together buildings on the outside. Mix in a mysterious foundling born covered in the feathers of the title, who’s a shadowy champion of the other poor kids against the guards, add the feisty upper-class girl who meets him, and we’re off, with another title whose nice-looking, detail-crammed art and clear sense of storytelling should reward readers willing to check it out. 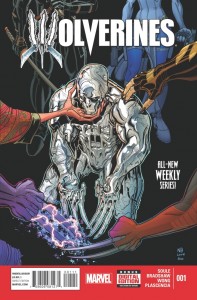 As the cover shows, Logan’s still dead, encased in adamantium, but that doesn’t mean Marvel can’t make money from his corpse: this continues from the Logan’s Legacy series, as five new Weapon X subjects, each with different powers, are facing a time bomb in their  DNA that will kill them, unless the healing factors in a quintet of Wolverine’s relatives and foes — Mystique, Sabertooth, Dakon, X-23 and Lady Deathstrike — hold the key to their survival. That’s a mouthful of plot and characters to saddle a new series with, and even the normally-dependable Soule can’t do much with it here, especially when the Wreckers and Mr. Sinister show up to add to the already-crowded cast, and Bradshaw’s just-OK art isn’t that good at helping us distinguish between all those people, or care. Best just to let this name and character alone for a few years instead…. 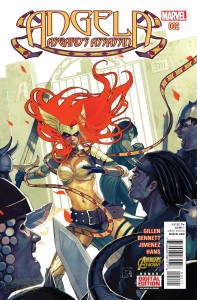 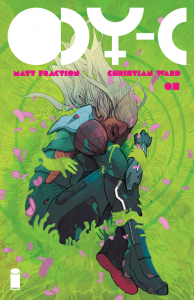 A quartet of second issues, each of whose first issues were worth reading. Can they all sustain the momentum? Pretty much… Angela shows Gillen’s knowledge of Asgardian mythology, and he works to make the title character, who up to now has been pretty much a cipher, into someone interesting (his idea that angels are master barterers — they 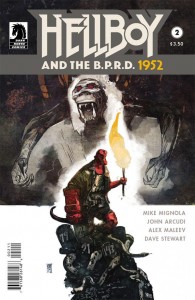 never give anything away for free — helps, as does Jimenez’s interesting layouts and ability to draw the various Norse creatures and other cast members. ODY-C also benefits from Ward’s excellent art and coloring; this looks trippy and complex enough to have been serialized in a run of early Heavy Metals, and Fraction’s conceit of a retelling of Homer’s Odyssey — but with an all-woman cast of both mortals and goddesses, and in space — gives all those cool-looking pictures a sturdy foundation on which to hang. Hellboy also makes good use of its artist — in this case, Alex Maleev, 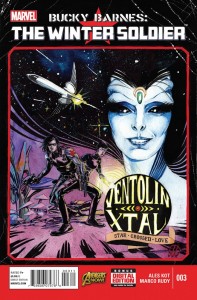 whose precise, shadowy style is a good match for Mignola and Arcudi’s tale of Hellboy’s first grown-up mission with his supernatural-fighting investigative team. Finally BB:WS continues to distinguish itself by being very different from the gritty, noirish character who was in all those Ed Brubaker Captain Americas: it’s a snarky, galaxy-spanning space romp, cynical and fun, with even more early-Heavy Metal-ish psychedelic art, with emphasis on lots of open, full-page compositions and imaginative layouts. Between the smart scripts and the pretty pictures, all four of these books are inviting enough to bring readers back for a third issue. 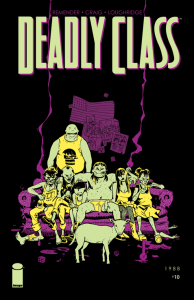 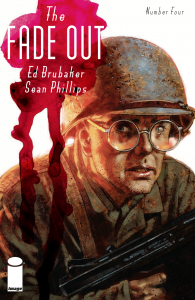 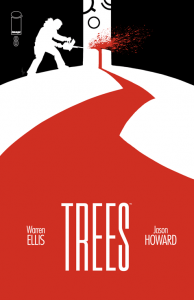 The best of the rest: Deadly Class manages to combine a raid by its in-training teen assassins on a den of killers with what happens when you get too drunk the night before you’re supposed to work a big sale at a comic book store by yourself; neither operation goes particularly well for Marcus, the book’s put-upon main character. The Fade-Out 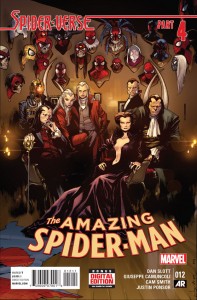 continues Brubaker and Phillips’s very-well-made ’40s-Hollywood murder mystery, while Trees, after a slow seven-issue build of its situation (giant, silent alien constructs dotted around the globe, plus the communities that have sprung up around them), suddenly lets loose with big chunks of action, much of it leading to severe, and permanent, effects on the book’s globe-spanning group of 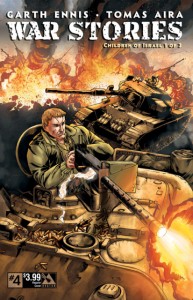 characters. Meanwhile, Amazing Spider-Man offers the antepenultimate chapter of its fun, multiverse-spanning “Spider-Verse” crossover, while Garth Ennis begins the next serial in his War Stories, this one a three-parter about a tank commander in the Israeli Army during early October, 1973, which is significant because… well, Google it if you don’t know your Middle Eastern history as well as you should. 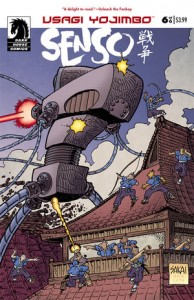 Finally, Usagi Yojimbo offers the last installment of its current mini-series, (which, as it’s set in the future, may also count as the last Usagi story, for reasons that will become obvious); among other pleasures, it offers a manga convention that’s never been used in Usagi before, and a flash-forward to an unexpected-but-welcome member of the Usagi universe, who’s had a few mini-series of his own. That kind of careful construction and planning is one of the many reasons that this series has been such solid entertainment for the last couple of decades.

With 40 years of experience in comic reading, collecting and reviewing, English Professor Phil Mateer has an encyclopedic mind for comics. Feel free to ask Phil about storylines, characters, artists or for that matter, any comic book trivia. He will post your questions and answers on the AABC blog. His knowledge is unparalleled! He is also our warehouse manager, so if you are looking for that hard to find comic book, ask Phil!
View all posts by Phil →
This entry was posted in New Comics, Reviews and tagged Angela, Ant-Man, Deadly Class, Fade Out, Feathers, Hellboy, Lady Killer, Ody-C, Peggy Carter, Spider-man, Squirrel Girl, Trees, Usagi Yojimbo, War Stories, Winter Soldier, Wolverines. Bookmark the permalink.