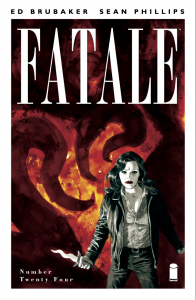 These first four books are linked simply because they’re all good stories from top creative teams, and representative of the best that weekly serial comics have to offer. Fatale is 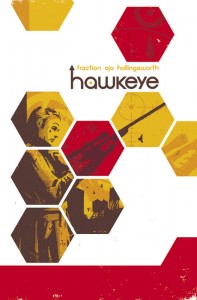 the last issue, and a definite, and satisfying, conclusion to the story; Brubaker and Phillips have been offering effective crime/noir books for a decade now, since Sleeper, but this has been their longest sustained narrative, and throwing some Lovecraftian supernatural elements into the mix only improved the recipe (between this and Afterlife With Archie, ol’ H. P. is on a roll right now). Hawkeye has been plagued by delays, but damned if it isn’t worth the wait: this episode sees Clint Barton still dealing with the tracksuited Russian mobsters, and finally starting to get his life back together; after an attack last issue, he’s deaf, and 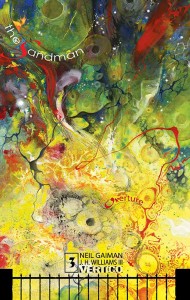 Fraction and Aja use the opportunity to incorporate sign language into the story in a series of their typically experimental, good-looking panels. The book’s sporadic publication history makes it hard to remember its backstory, but it’s all so well done that it’s easy to forgive — provided that they stick the landing for the conclusion, this should be an awesome three-or-four volume collected set.  Meanwhile, Sandman has two top-tier creative talents in Gaiman and Williams III; at first, readers may wonder what the fuss is about, since this episode is mostly a journey, and on the surface not that much happens — but if they pay attention they’ll start to appreciate the enormously rich texture in both the words 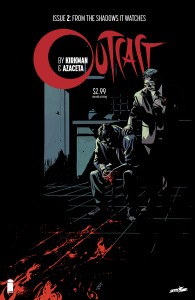 and the pictures, with their casual evocations of weird alien races and universe-ending mythologies, and then they’ll understand why this is worth reading. Finally, Outcast, unlike the other titles, is much closer to its beginning than its end: we have no history with it yet, so it’s busy with world-creation and establishment of character. Already, I like the way the title refers to both the exorcism/demonic possession hook at the center of the story, and the way the main character has been ostracized by his small-town neighbors, who’ve misunderstood his past actions — and then, in this issue, he realizes that he’s been acting the same way toward his now-catatonic mother; that’s a sign of a well-thought-out, clever narrative. Azaceta’s art continues to be very good at the small shiver and the quiet chill, and its smooth match for the writing should help make this book a well-deserved hit. 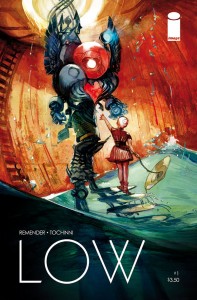 Three first issues (and, considering the huge number of titles launched so far this year, that actually makes it a slow week). Low is classic science fiction: as the sun expands and renders the surface of the earth uninhabitable, humanity has retreated to the ocean depths, to buy time to figure out how to save the race. There’s an effective combination of pulpy elements (evil-but-well-spoken undersea pirates) and big themes (Remender talks in the afterword about how the book’s built around the beauty, and necessity, of irrational optimism) at play here, and it

energizes the story and makes it hum (with this and Deadly Class, he’s having a breakthrough year). Bodies is a detective story set in the same location — London’s East End — during four different time periods: 1890, 1940, 2014 and 2050. The four-way narrative features four different detectives, each dealing individually with the discovery of a mutilated corpse — but the high-concept twist is that it’s the exact same body. Using a different artist for each time period enhances the conceit — Ormston’s Victorian-era scruffiness, Winslade’s film-noir ’40s and Lotay’s dreamy, disassociated future all bounce off of Hetrick’s more grounded present, with that same mysterious body tying everything together and making this an intriguing first issue. Magenta is, actually, the second issue of this Vertigo anthology series, following last spring’s Cyan: the hook here is that each installment features one of the four colors used in the classic comics four-color process, and that the stories in it have to incorporate that hue somehow. As with all anthologies, there’s a wide 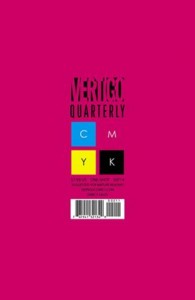 mix of styles and successes, covering nine eight-page stories — and some are drenched in the title color, while in others it’s barely there at all. The strict space limitations work better for some creators than others — Rachel Deering and Matteo Scalera offer a quick, nice-looking horror story with a pyrotechnic ending that’s just right at that length (Michael Moreci and Andrea Mutti’s later “Captives” is a much lower-key member of the same genre), while Carla Berrocal’s pulpy, cool-looking “Who Is Uber?” is more like the first chapter of an eventual longer work. Jody Houser and Nathan Fox’s “Adrift” makes good use of both the color and the format, as two girls prepare for a funeral and squabble over a doll; Annie Mok and Dawson Walker’s “Gem Pockets” has a much different style, but is a similar slice-of-life story, with a similarly gentle, human heart at its center. Peter Milligan and Rufus Dayglo contribute a small-scale tale about a repressed upper-class Englishman that has an explosive ending, as does the washed-up-boxer story “Gloves,” by Ryan K. Lindsay and Tommy Lee Edwards. The best two offerings are probably “Magenta is Not a Color,” in which Rian Hughes makes the splashiest use of that title shade, and Fabio Moon’s “Pink Slumber”: both are about the tentative beginnings of relationships, and offer a wry optimism that’s a fitting take-away legacy from this collection. 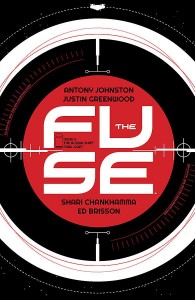 The end of this science fiction/detective comic’s first arc (it’s a police procedural set on a huge orbiting space station), and it’s shown a lot of potential; the script is clever, the plot suitably twisty, and the characters (particularly Sergeant Ristovych, the tough-as-nails, seen-it-all female detective who’s trying to solve a series of murders with her newly-arrived rookie partner) are people we’d like to spend some time with, and get to know better. 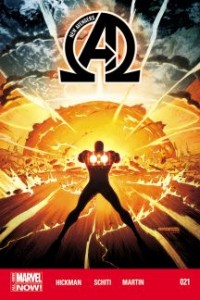 Two Avengers books (there were actually more, Marvel’s haphazard scheduling being what it is, but let’s just concentrate on these two main, Hickman-generated ones), with New Avengers being a surprisingly-deep (and dark) look at what happens when saving the earth, and the 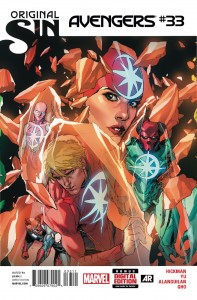 universe, means having to make very hard, and not particularly heroic, choices. Meanwhile, Avengers features a solo Captain America in the very far future (the issue’s cover is annoyingly misleading, since none of those characters are actually in the story), fighting against an order-loving, world-conquering artificial intelligence, and using a particularly literal deus ex machina to do it. Both issues can be read as stand-alone tales, but are also part of a sprawling, interconnected years-long story; it’s been OK, but has overstayed its welcome enough that I think we’ll all be glad to see it finally make its connections, reach its conclusions and make way for something new in a few months. 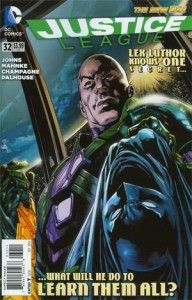 As with Avengers‘s misleading cover, here’s another one — no scene like it takes place anywhere in the comic, and in fact Luthor only shows up for three pages: a particular pet peeve of mine, since it feels like a bait-and-switch for readers, and a sign of bad editing. Too bad, since otherwise this is a typically high-quality slice of the Johns/Mahnke JLA soap opera, with emphasis on introducing the New-52 version of the Doom Patrol (with an even-more-psycho-than-usual version of Niles Caulder), and on what’s happening with the evil Crime Syndicate-dimension version of Green Lantern’s power ring. Lots of fan-friendly writing from Johns, while nobody makes self-confident, sneering evil quite as attractive as Mahnke; together, they continue to make this one of the better current DC titles. 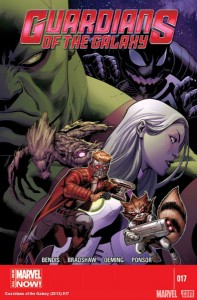 Two by Bendis (a typical week for that prolific writer); Guardians wraps up a “team members get captured separately/team members gradually reunite and kick butt” arc, not a bad introduction of the characters to movie-

inspired new readers. It’s kind of weird to see Oeming’s work on this crew instead of the one from Powers, his long-time collaboration with Bendis; I like it, although in one panel Star-Lord looks alarmingly like Deena Pilgrim…. Uncanny X-Men is the second part of “Professor X’s Will”; not a lot happens, frankly, although all the characters’ voices are OK and there are a couple of interesting interactions; without the Chris Bachalo art to add another layer, this chapter by itself feels like pretty thin stuff. 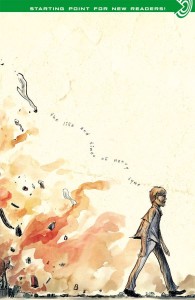 This is billed as a stand-along summary story to attract new readers, a life story of the secondary protagonist, Henry Lyme (whose name sounds like it came straight from a 1950s spy novel). I’m not sure what new readers would think of Kindt’s crayony art and group of various psychically-powered characters, but they should give this a shot: it bears repeated readings, and has carved out a quirky place for itself through sheer stubborn attention to detail and classic movie-style storytelling.

With 40 years of experience in comic reading, collecting and reviewing, English Professor Phil Mateer has an encyclopedic mind for comics. Feel free to ask Phil about storylines, characters, artists or for that matter, any comic book trivia. He will post your questions and answers on the AABC blog. His knowledge is unparalleled! He is also our warehouse manager, so if you are looking for that hard to find comic book, ask Phil!
View all posts by Phil →
This entry was posted in New Comics, Reviews and tagged Avengers, Bodies, Fatale, Guardians of the Galaxy, Hawkeye, Justice League, Low, Mind Mgmt, Outcast, Sandman, The Fuse, Vertigo Quarterly, X-men. Bookmark the permalink.