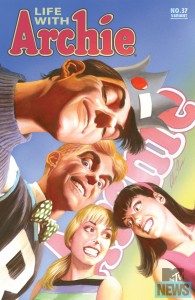 If you’d told comics fans a year ago that, in the future, for two weeks in a row, the top books would be… Archie comics, they’d have laughed you out of your local comics shop — and yet here we are: after last week’s “Death of…,” the company follows up this week with two worthy efforts. The first, Life of Archie #37, is the coda to the character’s “death”: Riverdale a year later, remembering the red-headed Everyman’s life. It’s much less maudlin than you might think, as the creators use 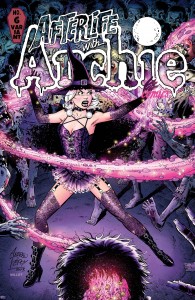 the occasion to do some flashback stories (including a Little Archie one), and then end on a note of optimism. A note about the covers: there are a number of variants, and I’m sure the most popular will be the one by Alex Ross, but his pseudo-realistic style doesn’t work that well with the characters: instead of being fun, that’s actually one creepy visual: if you woke up and saw those leering faces looming over you….. Speaking of creepy, Afterlife... ships this week too, and it’s an even better book — last issue having ended the first arc, it’s a stand-alone story involving just Sabrina, and let’s just say that anyone figuring that this title’s endgame would involve the teenage witch coming back and setting things right (like one of the book’s two covers implies) will turn out to be very wrong. Aguirre-Sacasa says in the afterword that he and artist Francavilla are both huge Lovecraft fans, and that certainly shows here, as we find out that using the Necronomicon in the first issue wasn’t just a casual throw-in, but integral to the overall plot. This book, from the beginning, has been surprisingly, startlingly good at doing creeping dread, and this tale is no exception, with the paranoia and tension building to a spectacular two-page splash at the end, and the realization that, for Riverdale and the world, a zombie apocalypse is actually the least of their worries. 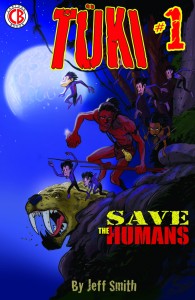 Like most great creators, you never know what to expect with Smith — after his game-changing, immensely popular Tolkien-crossed-with-Disney Bone, his follow-up, RASL, was a totally different experience, a suspense-filled science adventure. Here, he’s covering anthropology and paleontology, looking at the world two million years ago, when our first homo erectus ancestors were sharing Africa with other distant-human offshoots, and saber-tooth tigers were at the top of the food chain. What doesn’t change about his work is that it’s always very well-drawn and tells an exciting, smart and well-constructed story; in a year that’s seen a huge number of new books, don’t let this one slip through the cracks, because it’s worth keeping. 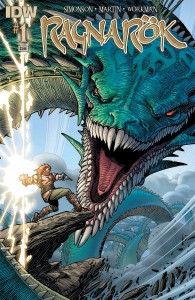 As the title suggests, this is a return to Norse mythology for Simonson, with the cover and first few pages echoing the end of his long, well-regarded run on Marvel’s Thor. However, it’s not quite the same characters — the publisher is IDW instead, so while he can’t use anything copyrightable to the House of Ideas, he can use the same names and relationships, just as anyone can use, say, “Hercules,” and he’s free to do the characters exactly the way he wants, without editorial interference. Here, the events being chronicled occur long after the title apocalypse, and involve a dark-elf assassin as she takes on a quest that stirs up now-ancient history, and indicates that at least one of the long-dead gods may not be as gone as it seemed. One of the things that made Simonson’s original Thor run so good was his knack for chronicling larger-than-life themes about heroism, love, and villainy, and that’s all used to good effect here, too — while the art, as always, handles both the large-scale, epic settings and smaller-scale, emotional moments equally well. 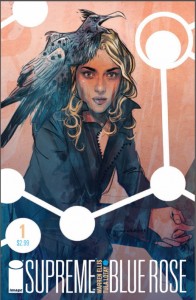 Two by Ellis.  The Supreme is yet another re-imagining of that character; as a Superman avatar, he’s been an attraction for a number of writers, most notably Alan Moore, but while Moore’s version was about reconciling and reinforcing all the Silver-Age pageantry of the concept, Ellis has always had a darker take about how such concepts would actually work in the “real” world (see Planetary, especially). In this first issue, like Moore, Ellis plays with and comments on the very idea of story-telling, and then gets down to business: the title character doesn’t really show up at all, as instead an 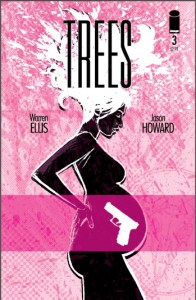 investigative reporter named Diana Dane gets an assignment from a shadowy futurist, Darius Dax, to research what happened years ago when an object fell from the sky near the town of Littlehaven, and how that’s connected to a man named Ethan Crane (substitute “Lois Lane,” “Lex Luthor,” “Smallville” and “Clark Kent” for all those names, and you’ll get the idea). Lotay’s art has an ethereal, dream-like quality that’s quite pretty, and fits the tone perfectly. The other book, Trees, I’ve already covered in these reviews; it’s about characters in a number of far-flung countries living their lives in the shadow of the huge, inscrutable alien constructs of the title, ten years after they first appeared. This issue focuses mostly on the ones in Italy (with a sidetrip to China); it’s very good, but as a small chapter in a much larger work — if you’re looking for a done-in-one issue, with anything like resolution or revelation, you won’t find it yet here. Howard’s art continues to remind me of Gabriel Ba and Fabio Moon — which is a high compliment. 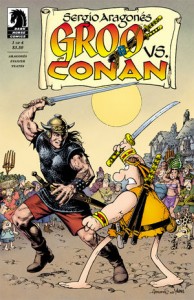 This is probably exactly like you think it is — although likely even better, with the “Conan” sequences drawn by Tom Yeates, and a plot that also involves the real-world Mark and Sergio, and a comic shop being forced out of business and Sergio getting amnesia and… well, there’s a lot going on, and the actual meeting between Robert E. Howard’s barbarian conqueror and the cheese-dip-loving mendicant never actually happens, but there are three issues to go, so be patient. Readers who like their sword-and-sorcery tales serious probably won’t be amused (and should be reading 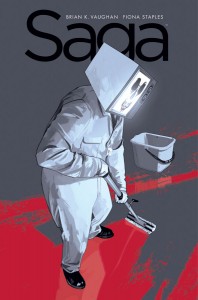 Ragnarok‘s very good version of that genre instead), but for everyone else, it’s a lot of clever fun by a couple of very professional, accomplished storytellers.

The Goon: Occasion of Revenge #1 (of 4) — Writer/Artist: Eric Powell 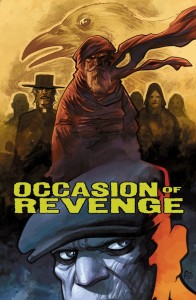 Accomplished, professional storytelling is what links these three indy comics, too: Saga continues to be solidly entertaining — probably because, while on the surface it’s a space opera about warring planets, robot princes and alien assassins, it’s actually about love and family, and the things that both pull them apart and bring them back together. The Goon showcases Powell’s versatility: while the one-shot a few weeks ago was cruel, slapstick fun reminiscent of early Kurtzman Mad comics, this mini-series mines the 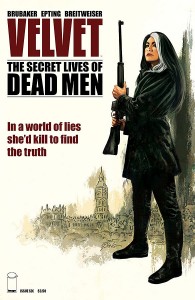 other books in the EC stable, like Two-Fisted Tales and Tales From The Crypt, as the Goon and his friends have to fight off an attack on their town from a number of powerful enemies. Velvet, like its title, is very smooth, high-end and expensive-looking; this first issue of the second arc picks up on the heroine’s quest to clear her name, as she returns to ’70s London to try to figure out who framed her, and has to navigate the shadowy special-ops underground to do it. All three books offer chapters of ongoing adventure thrillers — one science fiction, one horror and one spy thriller, but all of them equally entertaining. 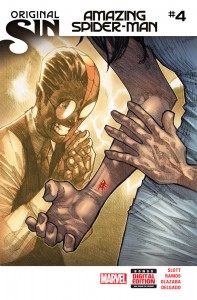 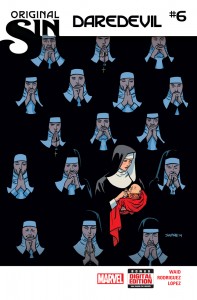 All three of these Marvel titles are “Original Sin” tie-ins — which really just means we get the same two or three-page recap of the Watcher’s eye exploding in each one, and then some hitherto-unrevealed secret from the heroes’ past. In the case of Amazing Spider-Man, it’s that another student, a girl, was bitten by the same radioactive spider that got Peter Parker, but has been hidden away all these years (in Marvel time, that’s probably what — five or six?), and finding her triggers one of those Morlun/Ezekiel multi-part things that J. Michael Straczynski initiated back when he was writing the title. In other, last-page-of-the-issue news, being bitten by the same radioactive arachnid apparently puts your hormones in synch. Over in Daredevil, the revelation is that Matt Murdoch’s father was sometimes violent toward his 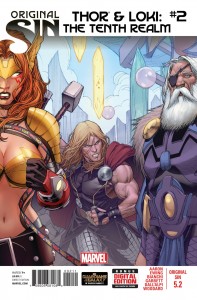 mother, which is why she left and became a nun; I could swear this has been covered by Marvel writers before now, but maybe not; the real plot involves her and a few other nuns protesting some shadowy Wakandan project, and getting illegally detained and extradited to Wakanda to face jail time (or worse), courtesy of evil government stooges from both countries. Thor/Loki continues the idea that Thor has a sister, who somehow turns out to be a character we’ve already met; this is kind of a cool twist, but with an explanation whose logic made my head hurt. All three comics have good writers — Slott, Waid and Ewing know how to make us sympathize with each main character, show off their powers entertainingly, and make us want to know what happens next — while Ramos, Roderiguez and Bianchi deliver art that’s clear and makes everything interesting to watch; they’re solid examples of Marvel’s brand of corporate sequential superhero storytelling. 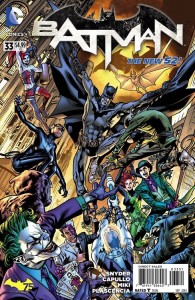 Over at DC, it’s the Big Two characters who have significant books out this week — Batman is the company’s best-selling flagship title right now, with the creative team 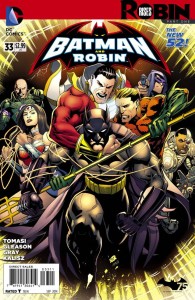 having been around since the first New-52 issue, and it’s currently wrapping up a Riddler-takes-over-Gotham story set early in Batman’s (and James Gordon’s) career. … And Robin offers the next installment of the bring-back-Damian “Robin Rises” arc that began last week in the Robin Rises: Omega one-shot, and will wind through the various Bat-books for a while; mostly, Batman argues with the JLA about the wisdom of running of to Apokalips by himself to rescue Damian’s stolen coffin, and find a way to revive him. He loses the argument, and goes on with his life. Ha, no, kidding: he just goes off and does what he wants anyway, like always, although by the end of this 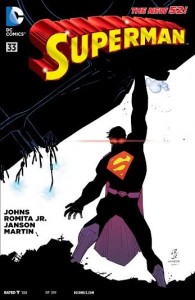 installment he hasn’t made it to Darkseid’s home yet. Finally, Superman is the second installment of the Johns/Romita Jr./Janson version of the Man of Steel, and continues the introduction of Ulysses, Superman’s sort-of mirror image whose parents sent him, as a child, from Earth to another dimension to escape a lab disaster (why everyone who starts writing Superman feels the need to introduce a funhouse-reflection version of him — Bizarro, this guy, the guy in Superman Unchained — is a question best left for another time). This title and Batman, like the earlier Marvel books, are smoothly-constructed examples of the pleasures that mainstream serial superhero books can offer.

With 40 years of experience in comic reading, collecting and reviewing, English Professor Phil Mateer has an encyclopedic mind for comics. Feel free to ask Phil about storylines, characters, artists or for that matter, any comic book trivia. He will post your questions and answers on the AABC blog. His knowledge is unparalleled! He is also our warehouse manager, so if you are looking for that hard to find comic book, ask Phil!
View all posts by Phil →
This entry was posted in New Comics, Reviews and tagged Afterlife With Archie, Archie, Batman, Daredevil, Groo vs. Conan, Loki, Ragnarok, Spider-man, Superman, Supreme, The Goon, Thor, Trees, Tuki, Velvet. Bookmark the permalink.