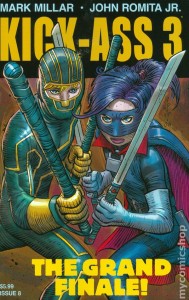 Millar has said previously that this issue is the end of both this mini-series and the entire Kick-Ass saga; he’s been coy about hinting that one or both of the main characters might not survive. I won’t play spoiler here, but I’ll say that it’s a satisfying conclusion, and has been his best sustained work (and certainly, if you go by publicity and movie deals, his most successful) — and that I actually cared whether the characters would live, one of the basic signs of a good storyteller. Appropriately, it’s very cinematic, down to a final sequence that echoes the first pages of the first mini-series, “actor” credits at the end, and a Marvel-like coda scene afterward — cleverly done, and an indication of how carefully the whole thing has been conceived and structured. Tribute also has to be paid to Romita Jr. and Palmer, whose art has been consistently smooth, realistic and a perfect representation of the various goombahs, corrupt officials, and everyday people who inhabit Dave and Mindy’s not-quite-real little world, and made it such a great place to spend some time with. 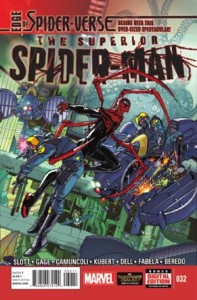 Yes, the Doc Ock Spidey “died” back in Superior Spider-Man #30, and the Peter Parker-focused Amazing Spider-Man relaunched instead. This “extra” issue doesn’t change any of that, because it takes place around issue #19 of the title, when a time-tossed Octo-Spidey ends up in the Spider-Man 2099 world. Then, on his way back to his own time, he miscalculates and runs into a number of other timelines where various versions of Spider-Man have been killed, and begins to realize that someone else is traveling 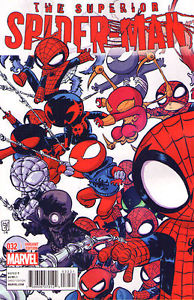 the dimensions of space and time, preying on them; what he does next sets up the upcoming “Spider-Verse” special event, which promises to include every version of the Wallcrawler ever seen in print (as an example, besides the 2099 version, this issue includes a Spider-Man who joined the FF, the Indian version of the character, a House of M one, a six-armed one, and a few others). Slott, Gage and Camuncoli, who made Superior S-M much better than anyone expected, do the same for this — and, given Spidey’s long history and the large number of alternate versions possible, a nigh-irresistable one, especially for long-time fans who’ll have fun trying to place all the iterations of the character. 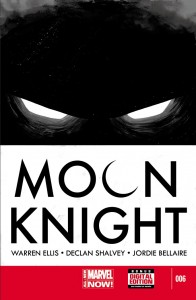 This is the last of the Ellis/Shalvey issues, which is a shame — but it was announced at the beginning of the run, so it’s not like we didn’t know. The great thing about the series has been that, typically for Ellis, each issue has been a stand-alone story (his Secret Avengers books did the same thing, and he was doing it well with his own Global Frequency a decade ago, too). This is a lost art in an age when almost everyone writes for-the-trade five and six-issue arcs, and while it does limit the novel-like depths the writer can explore, it also allows for the kind of tight plotting and one-off shock effects that the best short stories can provide. Anyone hoping to be a comics creator should look at Moon Knight #1-6 to see how it’s done, because the comics world could use more of these smaller-scale tales — especially when they’re done by creators as accomplished as these two. 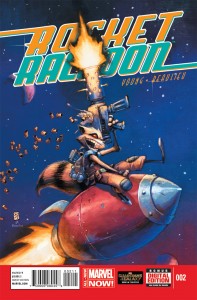 Let’s group the rest of this week’s Marvels together, since 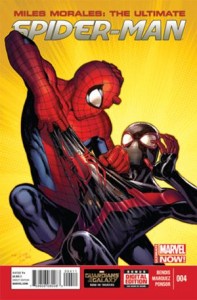 there isn’t that much to say about each one. Rocket Raccoon continues to benefit from Skottie Young’s story and art (fans of his Marvel cover work, in his unique chibi/Peanuts style, should check out the variant to Superior Spider-Man this week); it features the genetically-modified little carnivore with just the right mix of swashbuckling and smart-assery that fans of the movie should appreciate. Ultimate Spider-Man’s cover makes it look like a newly-revived (maybe) Peter Parker and Miles Morales are fighting, but that’s just 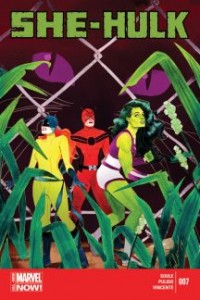 another one of those editorial bait-and-switches we were talking about last week; they’re actually teaming up against an also-revived Green Goblin, which should have been plenty exciting enough. The story itself is fine; Bendis has been writing these characters continuously since the turn of the century (14 years!), and knows exactly what he’s doing with them — even if the editor and cover artist don’t. She-Hulk has Javier Pulido back, which is as welcome as having David Aja back on last week’s Hawkeye — some artists are just perfect for a particular character. The story involves She-Hulk, Hellcat and Hank Pym shrinking to ant-size to help 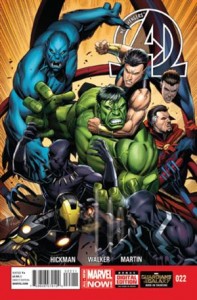 a lost scientist, and the already cool-looking visuals are made even better because of the work of Muntsa Vicente, who totally earns her label of “color artist” with an effective palette of bright, primary hues. Finally, New Avengers follows hard on the heels of its previous issue, as the team wrestles with the moral implications of having to kill an entire planet (which one of them did just last week), and the Sub-Mariner leaves the group, not so much through burning any bridges as by atomizing them. I have no idea how Hickman is going to end any of this; I’m starting to think it’s going to have to be with a big reset button, which would be disappointing, but I’m certainly going to stick around to find out — which, from the company’s point of view, is the main point. 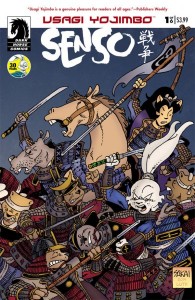 After he took most of the year away from his creation to work on the non-anthropomorphic 47 Ronin, Sakai’s rabbit warrior is stirring back to life: there was the color reprint of some of the Dark Horse Presents stories a few weeks ago, plus the announcement of The Usagi Saga, an omnibus series of softscover/hardcovers collecting the complete series (which, at this point, is over 200 issues). Now, here’s a brand-new mini-series, set 20 years in the regular comic’s future, where our hero has become a general fighting for his now-adult charge, Lord Noriyuki. Lots of sweeping battle scenes, smart military strategy and a startling development on the last page make this an effective, and welcome, first issue. 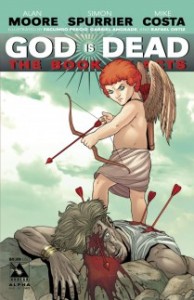 This is a stand-alone anthology about the main title’s world of returned gods; it’s worth mentioning because it has a new story from Alan Moore, a meta-meditation on magic and the nature of gods, with some bits and pieces from his real life and quite a bit of deep philosophy and sly commentary, all compressed into ten pages, but pretty much worth the book’s $5.99 price by itself. 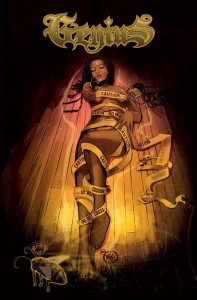 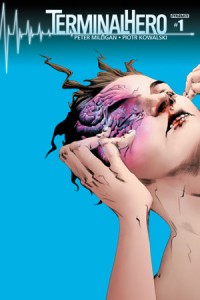 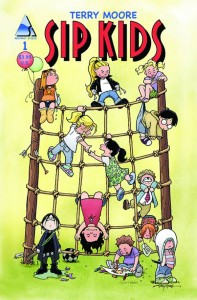 Six more first issues from smaller publishers, so let’s take them as a group. Genius starts from an intriguing premise: the title character is a 17-year-old girl named Destiny, living in South-Central LA, who saw her mother accidentally gunned down by the police. As it happens, she was born with a Sun Tsu/Machiavelli-level mind for military tactics and strategy, so she unites all the warring street gangs, trains them, and then declares war on the police department, who have no idea 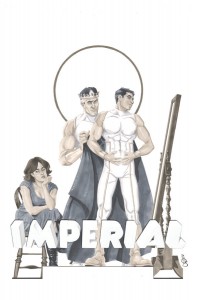 what they’re facing; it’s not exactly realistic, but the whole thing has a B-movie level buzz and go-for-it energy that keeps it entertaining and readable. Terminal Hero is about a young doctor with an inoperable brain tumor who takes a highly experimental treatment that accesses the unused portions of his brain, and… well, if you saw Lucy, or any of a number of similar sf stories, you know where it’s going. Milligan’s an experienced enough writer to make it work, and he’ll probably end up doing some interesting things with the mental powers/nature of reality parts, but it’s all pretty generic stuff so far. SIP Kids is a one-shot that takes the cast from Terry Moore’s Strangers in Paradise and gives 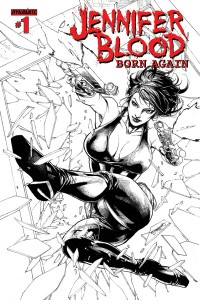 them a grade school/Peanuts-like makeover (hence the title); if you’re a fan of that series — and you should be — or of Moore’s work generally, you’ll love it (especially the last page), although other readers will have no idea what’s going on. Imperial is set in a superhero world where the leading, Superman-level “protector of mankind,” the title character, needs to find a successor to train, and picks a slacker schlump; this first issue goes just about exactly where you think it will with that premise, but offers a smooth and attractive enough package to give it some potential. Penultimately, Jennifer Blood is a relaunch of the Dynamite series about a Punisher-type  suburban mom; the “mom” part is gone, due to events in the 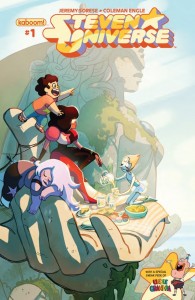 previous title, so now she’s just kind of a Punisher type. Appropriately, new writer Grant has written for The Punisher, and a number of other action/crime books, so it’s all competent, well-structured and, honestly, kind of forgettable; it needs more of series creator Garth Ennis’s over-the-top, OMG moments to cause more of a splash. Finally, there’s Steven Universe, yet another kids’-TV adaptation, from yet another alumnus of the Adventure Time show. It’s about a boy who becomes part of a quartet of gemstone-avatar intergalactic women warriors who protect Earth (he inherited the stone from his Mom), although you’d know none of that from this first issue: the main story is just everyone hanging out in their beach town doing incomprehensible small-scale things, with no text page or other explanation to help new readers. If you know any kids who watches the cartoon, they’d probably like this, but for everyone else it will make no sense: a definite 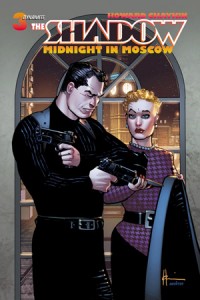 The Shadow: Midnight in Moscow #3 (of 6) — Writer/Artist: Howard Chaykin

I’ve reviewed the first two issues of this already; this one is more talking/plot development than action, so as a stand-alone story it isn’t that much, but Chaykin plus pulp comics plus  post-WWII intrigue always equals great art and a good time, so get the first two installments and this one too, and you’ll be able to appreciate what’s going on a lot more.

With 40 years of experience in comic reading, collecting and reviewing, English Professor Phil Mateer has an encyclopedic mind for comics. Feel free to ask Phil about storylines, characters, artists or for that matter, any comic book trivia. He will post your questions and answers on the AABC blog. His knowledge is unparalleled! He is also our warehouse manager, so if you are looking for that hard to find comic book, ask Phil!
View all posts by Phil →
This entry was posted in New Comics, Reviews and tagged Avengers, Genius, Gos Is Dead, Imperial, Jennifer Blood, Kick Ass, Moon Knight, Rocket Raccoon, Shadow, She-Hulk, SIP Kids, Steven Universe, Superior Spider-Man, Terminal Hero, Ultimate Spider-man, Usagi Yojimbo. Bookmark the permalink.