The sad news is that this incarnation of Young Avengers is ending in January, with issue #15; the good news is that Gillen and McKelvie are walking away on their own terms, having completed one overall “season,” and it’s been great: funny, wise, exciting, sometimes experimental, and always fun, both to read and to look at (McKelvie’s characters have become so sharply-drawn, so laser-focused and clear, that they leap right off the page). This issue is the next-to-last of the mega-storyline, so it’s fight-prep and fight, with the conclusion to come next issue and then a two-part “Afterparty” to wrap things up. New readers should probably start earlier, since they’ll be confused by the dozen-plus characters (and won’t understand the big reveal at the end), but don’t be fooled: this has been a meticulously-planned story, and its creators know exactly what they’re doing. Parts of it go all the way back to Gillen’s earlier Journey Into Mystery series (and the central character has always been Loki, the least-stereotypical and most-sympathetic iteration of that character ever), but every single member of the cast has had their moments. There will eventually be another season of the title, with another creative team, but it’s hard to see how they’ll be able to top this run. 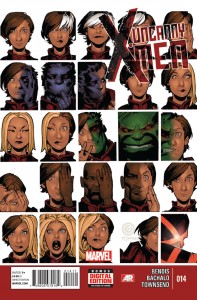 different people whose names I’m not going to type

Bendis has his detractors, especially when it feels like his books are so stretched-out and casual they’re barely there (as in some — maybe much– of his Avengers run), but he’s a very very good writer, and when he’s focused he can knock it out of the park. Consider this issue, which follows one of the newest members of the Scott Summers X-Men, Benjamin Deeds, who doesn’t even have a codename yet. Turns out he’s a… well, Emma calls him a “transmorph”; when he talks to someone, he subtly starts to alter his features and mannerisms to reflect them (the way, when you’re talking to someone with a broad Southern accent, you find yourself starting to drawl a little too), and ends up making them feel good about themselves. How would a power that passive help the X-Men? Emma and Magik take him to Atlantic City, and everyone finds out. Bachalo’s knack for expression and human features makes him the perfect artist for something like this, and the dialogue, both on the trip and throughout the rest of the book, just hums and crackles. This reminds me of the Claremont-era X-Men, because there’s a real sense of a sprawling, sometimes-bickering, cool family here, and it’s the kind of issue that would make a brand-new reader decide to stick around for more. 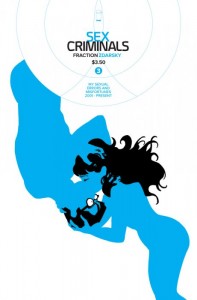 Two by Fraction, sort of — the FF isn’t really “his” anymore, since he left it an issue or two ago, and Kesel’s doing the writing based on his plot; our heroes have been traveling through space and time since the first issue, as Reed searches for a cure to their degenerating powers, and in two more issues they’ll find it (unless they all die and Marvel cancels the title permanently… eh, probably not). It’s been readable, but now the previous artist, Mark Bagley (whose art had been super-solid, as always), has left too, and his replacement is OK but not anywhere as good, so there’s a real sense of stumbling down to the finish line, 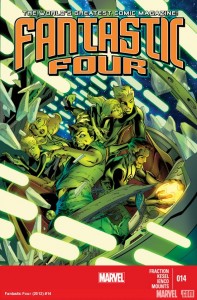 just kind of moving the pieces around and waiting for everything to end. On the brighter side, Sex Criminals is independently-owned, personal instead of corporate, and it continues to shine: Fraction is as on his game here as in, say, Casanova, and he and Zdarsky are obviously having a ball (yes, I’m going to insert at least one sex pun every time I review this comic); there’s a relaxed, casual vibe here that makes the characters, the set-up, the colors and the whole package really attractive (check the spontaneous pool-hall karaoke routine with the Post-it notes over the original lettered dialogue, and Fraction’s explanation for it). Bonus: there’s an actual plot that becomes more clear this issue, too; let’s hope the need for a linear narrative doesn’t screw up the book’s good parts — but I think these guys can handle it. 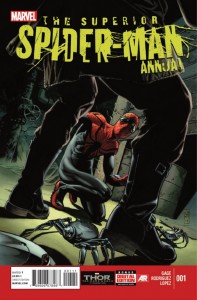 If you’ve been wondering how the Spider-Ock story has been going, but haven’t been picking up the regular series, this is a good time to check in: he comes up against Blackout, a typically-dark ’90s-era villain (a long-haired albino vampire sociopath who dresses in purple… not that there’s anything wrong with that), and handles him with an easy, confident brutality that the original Parker could never have mustered. Gage cheats a little, in that he has the bad guy do one of those “You can’t kill me, but eventually I’ll get out and track down all your friends and family and kill them” tirades that’s just asking for it, and makes our hero’s actions much easier to take — but, really, the reader is on his side anyway. That’s a tribute to Gage’s ability to manipulate emotions, even as the book’s normal nobility is turned upside-down; flaws and all, it’s easy to like this version of the character, and root for him, maybe because we know that he won’t be around forever. 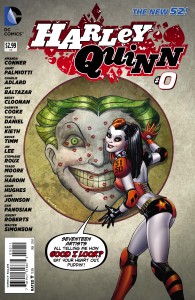 So, the title psycho-siren spends this whole issue talking to the co-writers, Palmiotti and Conner, about prospective artists for her new book. Boring? No, because Conner draws the three-page framing sequence, 15 other artists contribute a page each, and then the last two pages are by Chad Hardin, who’s going to be drawing the continuing series. This means that, for your $2.99, you get pages of Harley by Becky Cloonan, Tony S. Daniel, Walt Simonson, Jim Lee, Bruce Timm, Charlie Adlard, Adam Hughes, Art Baltazar (with his Tiny Titans characters), Sam Kieth and Darwyn Cooke (who draws a panel with the dialogue “I’m Amanda Conner, bitches!”), among others. Sure, it’s disjointed, but it’s relaxed and fun too — and hard to resist. 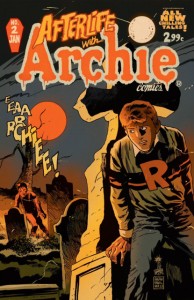 This isn’t as startling as the first issue — we already know the setup now, and we’ve already seen Francavilla’s art, and know what a perfect blend of Riverdale and George Romero it is — but it’s still compelling, watching as zombie Jughead bites Ethyl, who then turns and attacks someone else… while Principal Weatherbee and Ms. Grundy show up as the undead, too, and the infestation spreads, and the main cast has to flee and find a place of refuge, just like in all the best zombie movies. Knowing these characters so well still puts an extra spin on everything, and somehow the concept has just as much zip as, say, Marvel Zombies did (well, the first few, anyway…). There’s a scene in a diner where two minor characters are talking, we find out things about them we never knew, and then Jughead’s dad, now undead, enters, that’s staged and colored for maximum horror impact, and is a good symbol of the kind of shiver up the spine that this book can deliver. That’s more than enough to keep readers coming back. 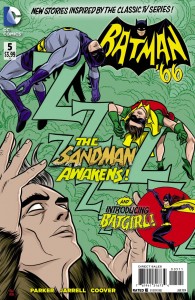 I’m still not sure what the audience for this book is — how many people remember “camp,” or the now-47-year-old Batman TV show, even from reruns? — but I have to admit that Parker is absolutely nailing the tone and dialogue of the series, while Procopio  manages to make the characters look like they’re Adam West and Burt Ward in costumes,  even while the other characters look more normally comic-booky. The real fun, though, is in the Coover backup, also written by Parker, which features the introduction of Batgirl, and has her battling the Eartha Kitt-style Catwoman. 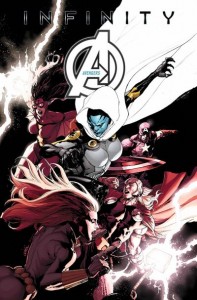 This issue of Avengers is the last to tie into the “Infinity” story, and leads into the last issue of that mini-series, due next week. I’ve been liking it OK: I admire the craftsmanship, but find that for Hickman, especially, these big events are like a game of Mousetrap: it’s kind of fun to watch the whole clanking machinery move around, and everything fall neatly into place, but there’s no sense of anything at stake (contrast that to Young Avengers, where I’m actually pulling for Loki to get his act together and do the right thing; here, I don’t really care what happens to anybody). 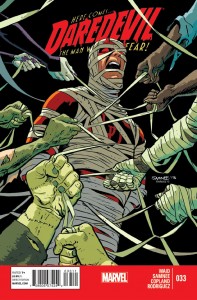 We’re getting down into the “don’t have much to say about it” section of the list: here, Waid’s two-parter with the Marvel monster characters ends, and there are some nice heroic bits (especially the clash between Matt’s logical, lawyerly mind and the supernatural things happening around him), but not having Samnee on that art hurts, and knowing that the book is ending in just a few issues crimps the enjoyment, too — we know everything will resolve soon, and even what the end result will be, so waiting to get there isn’t as interesting as with an open-ended, anything-could-happen book. 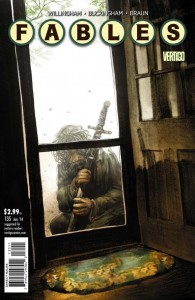 News that this title is set to wrap up within a year or so (Willingham has some other stories he wants to tell before he dies, and if there’s any justice he should be able to, while he lives comfortably off the many trades of this excellent series for the rest of his life) gives an extra poignancy to each story left. Few titles have managed an over-ten-year run of such high quality, so be grateful for each one left, as the story winds to a close and all the characters end up in the places they deserve. 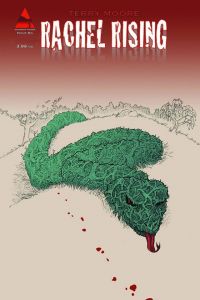 Moore’s sort-of zombie-but-with-witches horror story keeps chugging along, well into its last third by now; I don’t think we’ll be able to appreciate it fully until everything’s finished and we can read it all in one sitting, but in the meantime each individual issue has at least one great scene (here, involving a little-but-deadly girl and a great-big-but-deadly dog); it’s undeniable fun to be able to read a series like this in real time, savoring each chapter as the artist produces it, never quite sure what’s going to happen next: the experience trades provide can never quite match it.

With 40 years of experience in comic reading, collecting and reviewing, English Professor Phil Mateer has an encyclopedic mind for comics. Feel free to ask Phil about storylines, characters, artists or for that matter, any comic book trivia. He will post your questions and answers on the AABC blog. His knowledge is unparalleled! He is also our warehouse manager, so if you are looking for that hard to find comic book, ask Phil!
View all posts by Phil →
This entry was posted in New Comics, Reviews and tagged Afterlife With Archie, Avengers, Batman '66, Daredevil, Fables, Fantastic Four, Harley Quinn, Rachel Rising, Sex Criminals, Superior Spider-Man, Uncanny x-men, Young Avengers. Bookmark the permalink.