So far, this has been the year of the first issue, with lots of reboots, brand-new series and plain-old-relaunches almost every week. This time, we’ve got nine first issues to look at (and there were actually a few more than that I didn’t get to), so let’s start with the obvious best-seller: 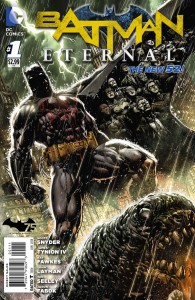 DC isn’t stupid: if you want to sell more comics, take your top-selling book and create a one-year weekly comic about it, making its regular writer your showrunner and adding a braintrust of your more imaginative other writers to hash out the plot points and take rotating script duties on it. Start with a shot of a defeated Bruce Wayne and a burning Gotham, and then back up and start showing how it got that way. It’s an effective beginning; will this become a clever romp, ala 52, a mediocre/OK story ala Trinity, or a disappointing mess like Countdown? Tune in next week…. 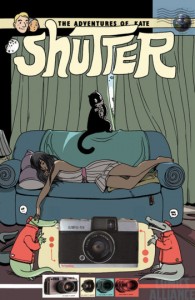 This is another in a long line lately of energetic, eclectic Image number ones, a modern-but-pulpy adventure comic about a globe-trotting photographer from a long line of explorers and heroes, who’s burned out when we first meet her but, soon enough, is pulled back into the game. Keatinge seems to be having a lot of fun with the action, and Del Duca is a careful, detail-oriented artist who proves capable of some great effects: note the double-page splash that opens the book, the centerfold shot of a not-quite-our New York City, the graveside scene and the last-page cliffhanger: this is an intriguing first issue, and a story well worth sticking around for. The regular cover’s good, but if you have a choice get the Brandon Graham alternate version; you know your book’s cool if you can get Graham to do a cover for it. 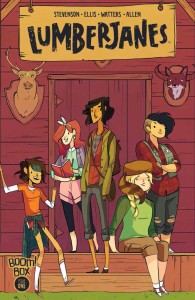 This is an all-female book about a group of sort-of Girl Scouts (the Lumberjanes of the title) at summer camp, who begin to realize that there are some very strange things going on in the woods round them. It’s drawn, and plays, like a cool TV cartoon (a more-grounded Adventure Time, crossed with Little Lulu), with nicely individual characters and a sassy, go-for-broke attitude. If I were a tweener girl, I’d find it both compelling and empowering; even as a grown-up, I can appreciate its charming, confident storytelling. 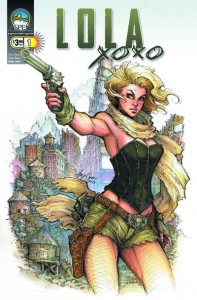 Oum’s a website developer, photographer and comic artist who’s done a lot of miscellaneous work for Aspen (who’s publishing this book) over the last few years; this solo effort is a very good-looking mainstream debut, about a girl who’s on a cross-country plane trip when a terrorist attack on most major US cities separates her from her parents, who are in LA. We then pick up on her 20 years later, in a post-apocalyptic, non-technological New York City (everybody’s riding horses, and the buildings are mostly burned-out ruins; that must have been one hell of an attack…), as she decides to set off across the country to look for her family. Oum’s a good fit for Aspen; she has a little of the Michael Turner knack for drawing attractive figures, and her single-woman-adventurer story is right up that company’s alley. Add in her pleasingly-soft penciling style, and her warm coloring palette, and this is already one of the best-looking books on the stands. 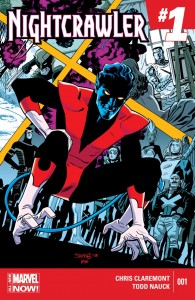 Claremont on Nightcrawler seems a good match, and this is a smoothly-professional debut, although it all seems a little… off; it’s as if Claremont has taken to heart all the parodies of his ’70s and ’80s stylistic tics, and resolved to get rid of them. The result is a much less wordy book than you might expect, and one that seems over much too quickly (it’s almost like the stuff Stan Lee’s done over the last few decades or so, where it feels like an older writer who’s no longer writing for himself or his contemporaries, but for what he thinks a much-younger set of readers would like, practically a Spidey Super Stories version of the Marvel Universe). Nauck’s OK (he’s actually got a style close to Dave Cockrum’s, which is appropriate for this character), but his simplified drawing and lack of much backgrounds contributes to the X-Men Lite feel. It’ll be interesting to see if all of this is able to connect to a modern audience, and develop a sustainable readership. 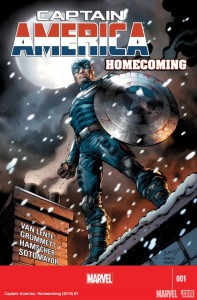 As a stand-along book meant to attract fans of the movie, this is a decent souvenir: for $3.99, you get a 20-page main story about Cap and the Black Widow visiting his old neighborhood in NYC (hence the title), and getting mixed up in an attempt by terrorists to kidnap a scientist; in addition, you get the Stan Lee/Gene Colan debut of the Falcon, from Cap #117: the full 20-page story, plus the cover, combining to make a package both old and new readers should appreciate. 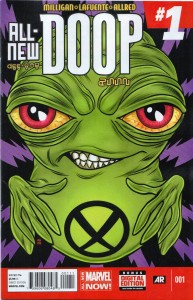 Milligan created this character, the green, vaguely oval, vaguely disgusting Slimer lookalike who hung around as team photographer with the group in his and Michael Allred’s X-Statix (and now “works” at the Jean Grey School for young mutants), so he’s the right person to write a mini-series about him; Lafuentes has a nice mix of cartoony and realistic styles, so he’s a good choice for the art. Doop’s a very meta character (he may or may not be aware he’s in a comic, but he can navigate through the panel margins, and he’s often lurking in the shadows, helping the team in quiet, scarcely-noticed ways), and Milligan’s offbeat sensibilities make this story, which involves Doop having a crush on Kitty Pryde while the events of last summer’s “Battle of the Atom” crossover occur around them, weird and sweet in almost equal measure. 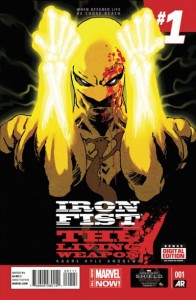 Eh. I dunno — some people really like Andrews, and if you do more power to you, but I think he’s an artist who needs a strong writer, and when he’s the sole creator of a book, like this one, his strong visual talents clash with his weak verbal ones, and you get kind of a mess. He has an editorial here where he talks about being taken with Jim Steranko’s Nick Fury books and how great it was that Steranko handled every aspect of them, but he neglects that that was only true of a couple of issues,  maybe four of which were really good, and then it all flamed out and went away. In the event, this book isn’t so much Steranko as Neal Adams on Batman: Odyssey: intriguing ideas, interesting art and, unfortunately, quite a bit of clunky/unclear writing. If you’re more about the visuals, go for it, but if you want a tightly-plotted and effectively-characterized story, this probably isn’t your particular cup of green tea. 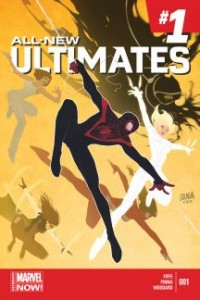 Not much to see here — the “All-New” team features the Ultimate versions of Cloak and Dagger, Kitty Pryde, Bombshell and Spider-Woman, plus the Miles Morales Spider-Man. It’s OK, in a kind of ’90s New Warrior way: a solidly-constructed vehicle to put the characters through their paces, but not the sort of all-star performance that’s probably needed to get readers to try yet another Ultimate relaunch. 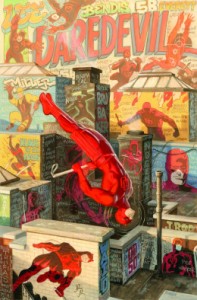 Interestingly, this is labeled as “Daredevil #36″ in the indicia; it’s a 50th-anniversary collection with the lead story, by Waid and Rodriguez, about a near-future San Francisco where Matt has a young son. The middle offering is more of an illustrated short story (although it’s got a little more art than that), about a tragic romantic relationship for Matt, while the last one looks at the happy-go-lucky “Mike” Murdock, Matt’s carefree alter ego from the ’60s. That last version here is less interesting than a Roy Thomas/Gene Colan reprint would have been — and, with the Captain America: Homecoming, how cool would it have been to get two classic Colan stories, in decent printing, out the same week? 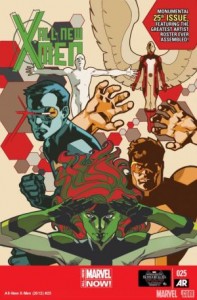 Yet another larger anniversary issue, with a framing sequence where a brooding Hank McCoy is confronted with all the possible alternate X-futures he’s screwed up by bringing the younger X-Men forward in time (his mystery confronter turning out to be someone intimately familiar with alternate futures). This serves as an excuse for a jam session involving what the cover calls “The greatest artist roster ever assembled!”; I don’t know about that, but there’s work by more than 25 pencilers and inkers, including Bruce Timm (on a future Jean Grey), Art Adams, David Mack, Scottie Young, Lee Bermejo, Kent Williams, JG Jones, J. Scott Campbell, Jason Shiga, Dan Hipp, Jill Thompson and Paul Smith: more than enough for your $4.99. 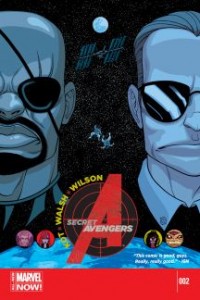 This isn’t quite as good as the first issue (maybe because I didn’t expect the first issue to be good, and was pleasantly surprised; there’s the heartbreak of increased expectations), with a little too much of Agent Coulson and Nick Fury floating around aimlessly in space, and not enough Hawkeye/Natasha/Spiderwoman banter. However, the M.O.D.O.K./Maria Hill scenes help to make up for it (“Slow clap… Clap for M.O.D.O.K.!”), Walsh’s clean, minimalist art continues to shine (particularly when paired with Matthew Wilson’s coloring), and this is definitely the best-ever Secret Avengers book not by Warren Ellis. 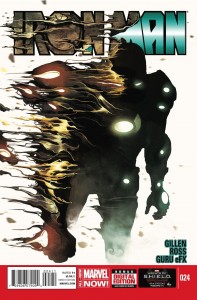 The long “Rings of the Mandarin” arc continues; it’s taken quite a while to build, but at the moment Tony is in Svartelheim, the realm of the Dark Elves, fighting Malekith, who’s managed to snag four of the rings; the combination of the scientist who hates battling magic, the reaction of the faerie folk to a man wearing a suit made of cold iron, and the way the rings themselves act as a collective character all keep it interesting and fun. 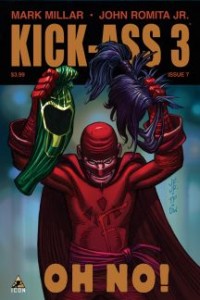 Our two heroes get together, set everything up, and head off to battle; since, according to Millar, this is the next-to-last book of the whole series, and will have a definite and irrevocable conclusion, you can’t be too optimistic about their chances next month. Millar isn’t exactly known for his great endings, either, so who knows (and, in this issue, there’s a total reversal by a character that’s not explained, makes little sense, and serves mostly as a convenient way to advance the plot)– but it’s all about the journey with him, and this has definitely been a good one, with the title insinuating itself into pop culture as few other books have. As always, Romita Jr. and Palmer make it all look fabulous. 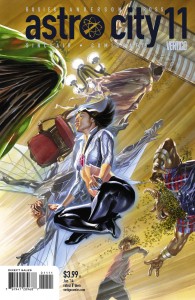 This is a one-issue story about the woman who’s an executive assistant to a Zatanna-like sorcerer; it’s exactly the kind of superheroics-from-the-perspective-of-a-normal-person stuff that Busiek excels at. Add it to your pile this week: it doesn’t require any commitment beyond this one issue, needs no backstory explanation, and shows a very good writer/artist team at the top of their game.

With 40 years of experience in comic reading, collecting and reviewing, English Professor Phil Mateer has an encyclopedic mind for comics. Feel free to ask Phil about storylines, characters, artists or for that matter, any comic book trivia. He will post your questions and answers on the AABC blog. His knowledge is unparalleled! He is also our warehouse manager, so if you are looking for that hard to find comic book, ask Phil!
View all posts by Phil →
This entry was posted in New Comics, Reviews and tagged Astro City, Avengers, Batman Eternal, Captain America, Doop, Iron Fist, Iron Man, Kick Ass, Lola XOXO, Lumberjanes, Nightcrawler, Shutter, Ultimates, X-men. Bookmark the permalink.