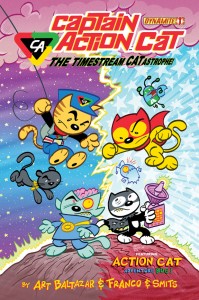 Everybody knows Baltazar and Franco, right — Tiny Titans? Superman Family Adventures? Baltazar’s art epitomizes “fun,” and his bold layouts and colors are super-attractive to younger kids; I don’t know anyone under, say, seven years old who can resist them. Add in enough clever references to “real” continuity to keep adults entertained, too, and those DC books were some wonderful parent/child comics-bonding issues. In this new offering, the team takes their own creation, Action Cat, and sets up a crossover with the ’60s Captain Action character — except that, of course, in an anthropomorphic universe he becomes Captain Action Cat. Throw in a time-travel/alternate universe/crossover plot that will eventually have them meet other older characters like Captain Midnight, along with some Dark Horse characters like Ghost and X, and you have a sprawling, joyful and very tongue-in-cheek party, a book that rises past a host of grimmer, more-serious first issues this week like a brightly-hued helium balloon. 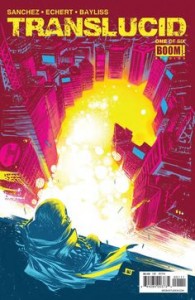 This is a superhero comic, but just off-kilter enough to be intriguing, with bright psychedelic coloring and a hero/villain relationship that’s smart and slippery enough to keep me reading (the villain thinks the hero is slipping, so tries to get him to up his game; let’s not even get started on the fact that said villain, “The Horse,” appears to be an actual, um, talking horse…). Flashbacks to the hero’s childhood and other touches offer some nice world-building, and while this is an old story in an old genre, it manages to keep things surprisingly fresh and interesting. 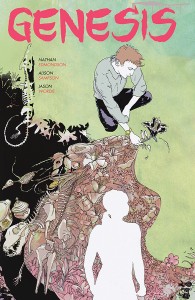 Edmondson is currently writing The Punisher and Black Widow for Marvel, but this 64-page one-shot shows his indy side: it’s a story about a preacher who feels like a failure, tries to kill himself, and then gradually finds out anything he can think about materializes, or happens. The problem is that his unconscious thoughts are just as capable of becoming solid as his controlled ones…. This isn’t at all a superhero book; it’s more of a dreamlike meditation on creativity and its peaks and valleys, more elegiac than positive. The parallel between the man who can create anything and the writer who created him is sometimes a little on the nose, but it’s all helped enormously by Simpson’s art — she has some experience in architecture that gives her a very solidly-grounded world in the buildings and backgrounds, and then she’s able to make her human figures sketchier and more tentative, which fits the story’s mood perfectly. This is the kind of book that some readers will dismiss as empty psychobabble and others will take to heart as a statement on the human creative condition; it’s definitely worth a look to see which side you’ll come down on. 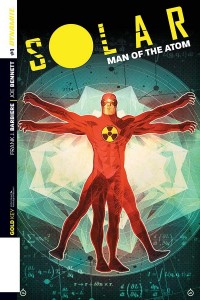 This has something of the same problem as the other Dynamite relaunches of these Gold Key/Valiant/Acclaim/Dark Horse characters: their stories, especially their origins, have been told, retold, rebooted and reimagined so many times over the last few decades that they seem old hat even before the reader opens the book — and it doesn’t help that, unlike, say,  Magnus, Robot Fighter, which at least threw some curves at the reader,  Solar is pretty much the same old familiar tale (even more so than most, thanks to Watchman‘s Solar avatar Dr. Manhattan), except for a couple of clever visual touches like floating equations. Barbiere and Bennett do a perfectly solid job here, but I don’t see anything in this first issue that will convince readers who didn’t pick up, say,  the Jim Shooter versions of this book to pick up theirs, and I don’t expect that it will last very long. 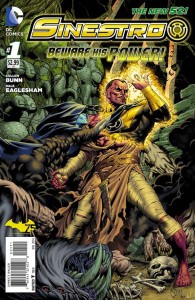 Speaking of old hat…. this is just about exactly what you’d expect from a Sinestro book; as with Solar, it’s not bad, but it’s certainly predictable. If you’re a fan of the DC Green Lantern titles, then this fits right in, and you’ll be happy to get it. If you’re not… well, there’s nothing here to convince you otherwise. 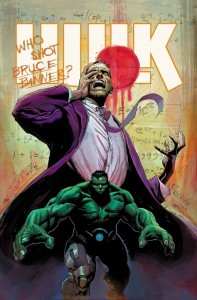 When is a first issue not a first issue? When it’s maybe the fourth relaunch of a title in the last decade (Indestructible Hulk, the previous volume, only went 20 issues, and was cover-dated January, 2013, so it lasted less than a year and a half) and it’s retaining the same writer (although Bagley is a different artist, replacing Leonil Yu). True, there’s a new storyline starting — at the end of the previous run, someone pumped two bullets into the back of Bruce Banner’s head, and when this issue starts they’re still there, and he’s sedated on an operating table — but that seems little reason to start over; this is a better comic than Sinestro, because Waid’s a more entertaining and imaginative writer, able to identify the best assets of a character and focus on them, but the effect on readers has to be the same: if you like this character, you’ll buy the book, and if not, not. Extra points for a potentially game-changing development at the end, although it’s one that’s obviously not going to be permanent.

So: your new Ultimate FF is Sue Storm, Iron Man (!), the Falcon (!!), and Machine Man (!!!). True, there are a couple of other regular cast members of the “old” FF hanging around (including a surprise reveal at the end), and maybe the end game in a year or two is to reunite the actual Sue/Reed/Ben/Johnny team somehow (although, this being the Ultimate universe, a number of those ships seem to have sailed permanently), but, judging by this first issue, it could just as well have been titled “New Ultimates”; there’s no real reason for a regular FF fan to buy it. Fialkov’s always fun, at least, and Guevara’s art has a sleek look that’s attractive (his linework reminds me a little of Carmine Infantino’s), but this is yet another first issue this week that looks like it’s going to struggle to find any kind of sustainable audience.

This sort-of counts as a first issue: next month sees the return of Amazing Spider-Man #1 (and just in time for the movie; what were the odds?), but this, the final issue of the current incarnation, sees the full return of Peter Parker, and a resolution to the last 18 months of story (last issue, #30, got rid of Doc Ock in Peter’s brain; this issue is a big fight against the Green Goblin and all his minions). It’s surprisingly good to have the wisecracking, ultra-responsible Peter back (‘most everyone notices the change immediately, including a great reaction from Norman Osborn), and I continue to be amazed at the way the Marvel creators played this out so expertly; Superior sold very well, and the pent-up interest in the “real” Spidey has meant that orders for Amazing #1 have topped half a million copies, so a good story and good sales are the best of all worlds. 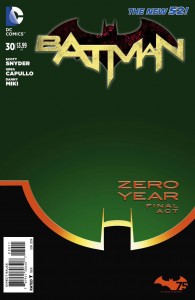 This counts as the first issue of the last arc of the “Batman: Year Zero” story, with Gotham a No Man’s Land-ish city ruled by The Riddler — except for the small guerrilla force led by James Gordon; the scene where The Batman joins forces with them has a couple of great pulpy adventure beats that help to show why this book is so popular. The strategy of crafting a series of five- or six-issue arcs that can be collected into trades later isn’t a new idea any more, but when done well it’s still the best way to create and sustain a best-selling book, and the crew here is very good at it. 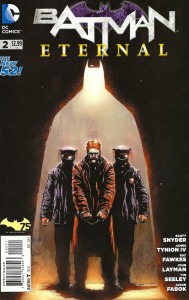 OK so far… we’re only two issues into a 52-issue run, but this second installment manages decent art, along with solid Batman/Jim Gordon in jail and Batman/Catwoman scenes to move things forward, and ann effective, if not unexpected, last-page reveal. The real test will be around issue 40: will it still be moving a solid story along, or will they be stalling for time and giving Catwoman amnesia? Stay tuned. 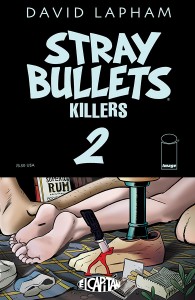 I kept reading this thinking, it’s really good but it doesn’t have the out-of-nowhere impact of the first issue, and then damned if it didn’t. 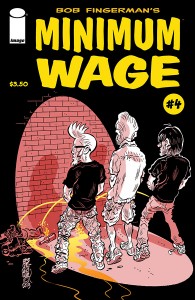 The cover’s combination of sharp design and an unblinking look at the scruffiness of a trio of 20-something single guys going all-night bar-hopping in NYC pretty much sums up the charms of this series. 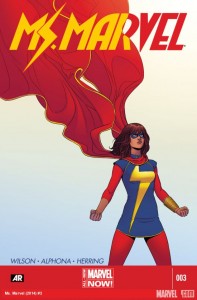 This series has charm, too, but in a completely different direction than that in Minimum Wage (and not just because it takes place in Jersey City instead of NYC): Wilson really nails the teen milieu, manages to make the lead character’s Muslim background a big part of her life without it being stereotypical or preachy, and, so far, has this first arc’s origin/discovering-the-powers plot percolating right along, with a last-page cliffhanger that should guarantee readers coming back for more. Add in Alphona’s appealing, accomplished art (with special mention to Ian Herring, the colorist), and this is an attractive-looking, easy-to-like comic.

“Attractive-looking” defines Bachalo’s art, too, and it continues to be the main attraction of this book, even with the tag-team inking. This issue is mostly moving a lot of sub-plots and pieces around, without much all-out action; it’s one of those Bendis lots-of-character-and-dialogue episodes, but the advantage of a book that ships twice most months is that it has the luxury of taking the time to do that stuff, without making readers feel that the story is moving too slowly — and, really, ever since the Claremont days the little X-Men character-driven bits have been the best part. 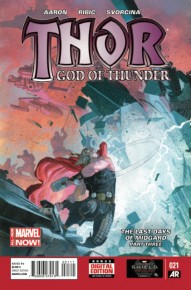 Another very attractive-looking comic, with a plot switching between the present (where Thor is finding out how hard it is to fight a super-rich, super-resourceful worldwide conglomerate), and the far future, where a very Odinish version of the Thunder God is battling Galactus over the bones of a ruined Earth. Thor’s always toggled between Earth-bound and cosmic stories, and Aaron’s time-split plot here offers a clever way to let him (and readers) have the best of both worlds.

With 40 years of experience in comic reading, collecting and reviewing, English Professor Phil Mateer has an encyclopedic mind for comics. Feel free to ask Phil about storylines, characters, artists or for that matter, any comic book trivia. He will post your questions and answers on the AABC blog. His knowledge is unparalleled! He is also our warehouse manager, so if you are looking for that hard to find comic book, ask Phil!
View all posts by Phil →
This entry was posted in New Comics, Reviews and tagged Batman, Captain Action Cat, Genesis, Hulk, Minimum Wage, Ms. Marvel, Sinestro, Solar, Spider-man, Stray Bullets, Thor, Translucid, Ultimate FF, X-men. Bookmark the permalink.