A new Astro City is always cause for celebration: Busiek and Anderson (plus Alex Ross on the covers) have been telling tales of this book’s title town for almost 20 years, and they’re always clever, human explorations of the superhero genre, packed with interesting characters and situations. Busiek’s been sick for the last few years, and unable to work on a comic as labor-intensive as this one — so the fact that this is a new ongoing series is good news, both for him and for us: check out the new players and new storyline on display here, and the easy collaboration between Busiek’s writing and Anderson’s clear, expressive art, you’ll see why. 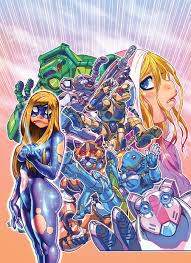 I’ve talked before about how much I like this comic’s offbeat exploration of female roles in superhero books, ranging from bondage and submission to feminism and, yes, empowerment and back again; now, others are noticing Adam Warren’s talents too: Bleeding Cool News offered an appreciation of this new issue here, in an article also printed in Wednesday’s New York Post: they find his brainy tech-oriented plots, affecting personalities, and sly metatexturalism as entertaining as I do. These short specials only hint at the complex relationships and sprawling world offered in the Empowered graphic novels, but they’re fun stand-alone stories on their own, and do their intended job of introducing readers to the pleasures of the larger books: buy one and see if you end up as hooked on its clever, entertaining humor and humanity as the rest of us. 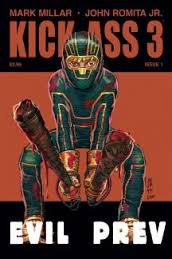 Millar notes in the editorial material here that this is the last mini-series he’s going to write about these characters (hinting that events in the series itself will make that inevitable), and this concluding installment is getting back to the real-world complications of trying to act like a costumed hero that the second series, with its larger-than-life villains and operatic street-fighting plot, chose to ignore (it helps that the one truly unrealistic element, the impossibly-lethal Hit-Girl, is sitting in a maximum-security prison, out of the action; the other characters’ aborted attempt to break her out is a darkly-humorous example of the chasm between funnybook aspirations and stone-cold reality that’s the book’s main theme). As always, Romita Jr. and Palmer offer exactly the blend of grit and fantasy needed to make it all work, and even knowing that these characters are likely to come to a bad end, it’s going to be undeniably entertaining watching them get there. 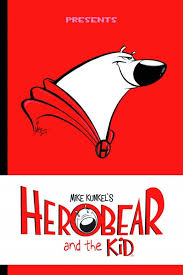 This series, about a boy and his stuffed bear who comes to life, obviously owes a lot to Calvin and Hobbes, but adds its own spin by imagining the kid’s toy as a superhero instead of just a wiseass confidante; it also helps that Kunkel’s background in animation  allows the character designs to be just cute enough, without being cloying or overdone, and that his comics background (he wrote and drew the DC Billy Batson and the Magic of Shazam! series) gives him an effective sense of pacing and plot payoffs. This is a good book to buy for younger readers on your comics-giving list, and has enough charm to let adults appreciate it too. 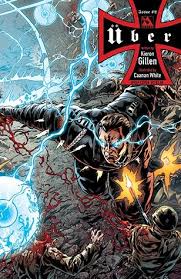 Two by Gillen: Uber is his creator-owned vehicle, and it’s an ambitious, dark and well-researched “what if?” story about the Nazis developing superhumans right at the tail end of WW II. It might be too well-researched, in fact; Gillen comments at the end of the chapter about the ethical responsibilities of writing about war, particular this one (he’s British, and their frontline seat to that conflict means 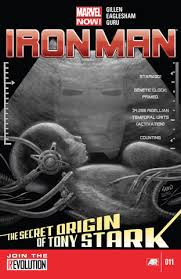 they take the sacrifices of the Greatest Generation even more seriously than we do), and his care sometimes threatens to suck all the energy out of the story. The tale’s only three issues old, though (there was a “0” issue), and he’s a talented and thoughtful writer; the plot’s intriguing enough that he’s still got a lot of time to find just the right narrative mix. Iron Man is concerned with history, too: the current storyline involves some revelations/tweaks to Tony Stark’s origin. I’m usually suspicious of these — writers are always tempted to play with their characters’ pasts, and all the tacked-on additions can get unwieldy very quickly — but, again, Gillen is a clever guy, and his ideas about just why Stark is such a techie genius, and has a fascination with weapons systems, make for fun reading here.

Two by Hickman, too — like Gillen, he’s a world-builder, but even more elaborate at it: witness East of West, which after three issues has only revealed bits and pieces of its alternate-Earth world; that’s confusing for readers, but in a good way: the book is so carefully and stylishly put together, there are so many cool little scenes, and Dragotta’s art is so pretty and precise that we’re happy to

go with the flow, and trust that eventually it’ll all come together, and be worth our time. Avengers tries to do much the same thing, as Hickman keeps adding pieces to a massive jigsaw puzzle (here, there’s Hyperion and Thor, the Savage Land and the High Evolutionary, the quickly-evolving children created by the… things from the guy on Mars who… um, yeah: complicated), but again the art, this time by Deodato, is both pretty and functional, and the individual scenes, like two gods discussing how family responsibilities can both trap and enoble a warrior, are more than enough to keep us reading to see what happens next. 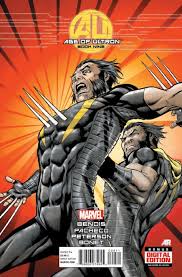 Yet another double shot, this time by Bendis: Age of Ultron is winding up, and the time-travel plot is doubling back on itself (as the cover indicates); after snarking about how slow the first few issues were, I have to admit that more than enough plot has been crammed into the rest of them, so no

complaints there — and it looks like the climax next issue should be fun, with the door to continuity changes left just slightly open enough to give other writers some room to improvise. ANXM plays the time-travel card, too, as its teen versions of the X-Men interact with the modern Marvel world, and it continues to be encouraging by how stupid it isn’t: it could have been horrible, but instead, 12 issues in, is a fun, whooshing ride with just the right combination of action, character and humor (the Captain America/Wolverine/Young Jean/Scarlet Witch/Young Scott/Havoc scene here, which takes up most of the book, is a perfect example). 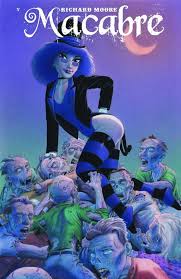 This presents itself as a horror anthology, although the three stories are so short (two five-pagers and a three-pager) that they’re more sketches than full-blown ideas; there are also eleven pages of pin-ups and splashes, and they showcase Moore’s fantasy/sexy art style better than the stories (this is billed as “mature readers,” and what that really means is: “lots of girl ghouls with nipples.” No, that’s not a complaint…). The best news is the ad in the back for a revival of Moore’s Boneyard, a series that blended his horror, pinup and fantasy obsessions with actual character, plot and slapstick humor, and deserves another shot at finding an audience; if this comic helps to do that, then more power to it. 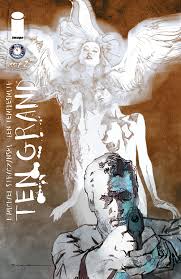 This features many of Straczynski’s obsessions — demons, angels, hard-boiled private eyes, and redemption — and fortunately they’re Templesmith’s, too, and he draws them in his unique shadowy/cartoony/surreal way; even if the writing sometimes seems a little paint-by-numbers, that art makes this this more than worth the $2.99 price. 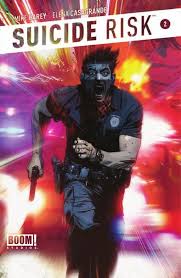 This book, about a cop who accidentally gets pressure-related super-powers (on an Earth used to them) has taken its time about getting the story going (the title isn’t explained until this second issue), but Carey is a past master at the slow build, and a good talespinner (his current series is The Unwritten, but he’s had long runs on Hellblazer, X-Men: Legacy and especially Lucifer, which was an impressive and darkly wonderful fantasy comic), so I’m inclined to give him the benefit of the doubt for at least five or six issues before making any final judgments; past consistency and quality will get you that. 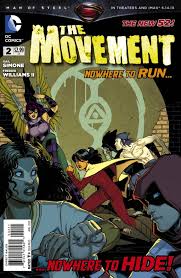 This story of an Occupy-type group of reject superheroes battling corrupt police is OK (as is anything by Simone), but is mostly worth mentioning for Gen-13 fans: DC’s New 52 has already introduced Caitlyn Fairchild and Grunge to their regular universe, and the last page of this book introduces another former member of that team. Just sayin’…. 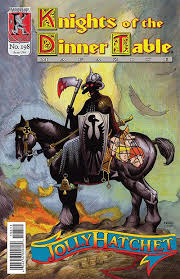 Stuff I liked enough to buy, but don’t have anything new to say about, so read previous reviews in the archives if you’re interested:

With 40 years of experience in comic reading, collecting and reviewing, English Professor Phil Mateer has an encyclopedic mind for comics. Feel free to ask Phil about storylines, characters, artists or for that matter, any comic book trivia. He will post your questions and answers on the AABC blog. His knowledge is unparalleled! He is also our warehouse manager, so if you are looking for that hard to find comic book, ask Phil!
View all posts by Phil →
This entry was posted in New Comics, Reviews and tagged Age of Ultron, Astro City, Avengers, East of West, Empowered, Herobear and the Kid, Iron Man, Kick Ass, Macabre, Suicide Risk, Ten Grand, The Movement, Uber, X-men. Bookmark the permalink.