The Latest and (Mostly) Greatest #76 by Dan!

All right folks! It’s been an interesting week, so let’s do this! 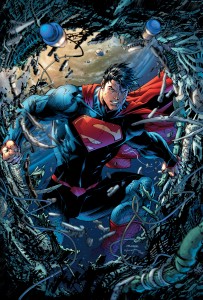 Two very different books come from one writer this week. The big brand new ‘crazy awesome’ Superman comic kinda hits with a thump. There’s a lot of ideas here (a Superman-equivalent from the 40s could be used to beat Superman, Lois Lane’s dad is evil as always, Lex Luthor is watching, as always), but the problem is that there seems to be nothing I haven’t seen before. Even the Lee art seems like traditional stereotypical fare. It’s just very “meh.” Batman on the other hand, seems to have a lot of potential. While I’m worried about this story going on for an entire year, there’s enough pieces here involving the Riddler and newly introduced Wayne relatives that I’m kind of excited to see what happens. 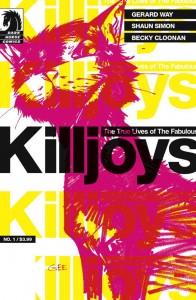 Boy oh boy! this is a weird comic. So the former lead singer of My Chemical Romance has put out a book with the girl who was drawing Conan the Barbarian, and it’s awesome. The story revolves a young girl who acted as the Snapper Carr to a JLA type team. However, they kept trying to keep her safe cuz” they thought she was the Messiah, and they died for it. So now she has to fight her way through the apocalypse all on her own, thinking that she’s some kind of god. It’s very interesting, and puts a lot of pieces in place. It’s an incredibly good first issue, and worth checking out. Did I mention it’s pretty? Cloonan’s an amazing artist, but you knew that already. 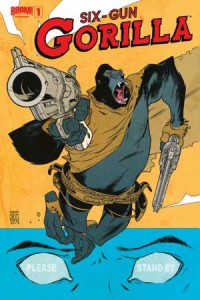 What more is there to say that isn’t already covered in the title of this book? It’s actually much more than a monkey that has five guns or more. It’s a complete sci-fi tale about some kind of weird war in a desert. A ragtag team of misfits (I’ve always wanted to say that) gets sent to this desert on a suicide mission to retrieve some information from an injured officer. On top of this, all of society can see the fight and watch what’s going on like a reality show. And there’s a group of people out in the desert who don’t like that. There’s a ton of stuff going on, and a lot of potential here, and the gorilla isn’t even the most important part. It’s a lot of fun. 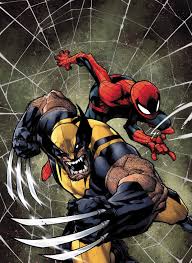 When a book starts off by telling you it doesn’t give a flying F about continuity, you know you’re in for a treat (sarcasm). Let’s just start with my bias; I am not a fan of Joe Mad. I feel like all his stuff is overexaggerated and messy and boring, and it just brings down the quality of the book, regardless of the writer. Wells puts together an OK story (Fisk as leader of the Hand has had his authority questioned and hires Elektra to get a team together to help him), but it also doesn’t quite make sense. The Kingpin has evolved into an unbeatable character (he takes THREE throwing stars to the arm for pete’s sake), so why would he need any help? It’s goofy and meh and I’m not interested anymore. 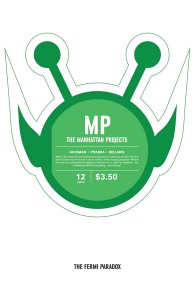 Every issue of Manhattan Projects makes the series more and more perfect. It’s a bit insane how good I think this book is. I never thought a book could make me care this much about Enrico Fermi (WHO?), but hot damn, if that last page didn’t make me feel incredibly depressed! Turns out Fermi is an alien, and he’s finally going to try to get his revenge. That mixes with a flashback to a scene that now takes on a completely different meaning. Hell, Hickman makes one word have twice the meaning it had before, and it’s just so perfect. Let’s not ignore that Pitarra keeps the characters enough to be completely noticable, and this comic is just perfect. Perfect perfect perfect! 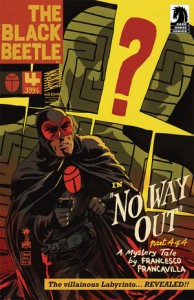 Star Wars #6 Writer: Brian Wood Artist: Carlos D’Anda: Pieces keep moving right along in this story, and even though we know that this is not going to really change anything (we know what happened in Return to the Jedi…) it’s a fun experiment that’s very enjoyable.

Suicide Squad #21 Writer: Alex Kot Artist: Patrick Zircher: This book has been very interesting with two issues run by the new team. It’s still a little goofy, but it actually seems fun now, and not just violent for violent’s sake. 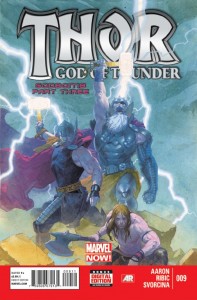 Thor: God of Thunder #9 Writer: Jason Aaron Artist: Esad Ribic: A gigantic fight of three Thors vs. a God Killer. It’s a pretty crazy battle that doesn’t quite go how you’d expect it to. The first issue that I’ve really enjoyed of this series. Fun stuff.

Uncanny X-Force #6 Writer: Sam Humphries Artists: Adrian Alphonsa & Dexter Soy: This book is getting better each issue. Using pieces from the past X-Force run to keep things going is a very good choice.

And that’s the week! Now I’m off to watch more Arrested Development!