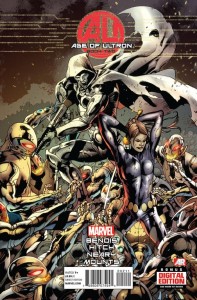 First, for a story set in an Ultron-destroyed New York, Age Of  is a very pretty book — all the little bits of rubble are lovingly drawn, while the desperate human refugees look unfailingly handsome; even a reveal of Black Widow’s injured face looks oddly attractive: this is what happens when you get Bryan Hitch to draw your comic. When you get Brian Michael Bendis to write your comic, on the other hand, you get deconstructed storytelling, and this is almost a parody of that: this second issue doesn’t advance much beyond the first (as Dan pointed out, Captain America spent the entire first issue sitting down, while by the end of this one he’s standing; by the end of the series, he might have actually walked out of the room). Snark aside, though, this is an effective book, offering just what readers want in a big-event story: the triumphant bad guy, the rattled and defeated heroes, and the sense of big stakes and sweeping changes (however illusionary it might be, although Marvel’s been making all the regular noise about this being a game-changer). If you’re a Marvel fan, you’re going to buy 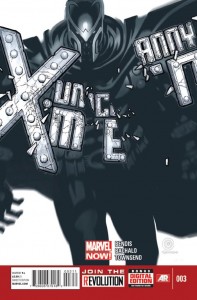 it, and other than a nagging sense of wanting more to happen, you won’t be disappointed.

Uncanny is a very good-looking comic, too, with its Bachalo art, and although it’s also by Bendis it has an actual confrontation between the Cyclops-led revolutionaries and the Avengers (not that anything actually happens there, mind you, but still…). This comic seems to be the New Avengers to All-New X-Men‘s focus on the standard team, and besides the cool visuals it’s offering a neat psychological snapshot of its rebel team, squabbling and backstabbing but also committed to helping its set of new mutant kids; after a couple of issues, both books seem to be hits, and deservedly so.

Two Wolverine books this week (because you can never get enough snikt and violence); Wolverine is yet another handsomely-drawn comic, courtesy of Alan Davis (who shares common Neal Adams-inspired roots with Hitch) and the dependable Paul Cornell, who offers up the fast-healing Canadian vs. a death ray, and a seemingly-possessed father and son; there’s lots of destruction and 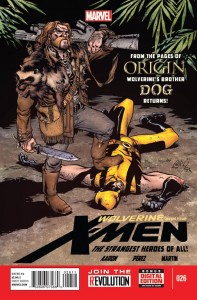 death, although Davis’s clean style makes it all antiseptic instead of gory: as a first issue, this is almost exactly what you’d expect a decent-enough Wolverine book to look like. Aaron’s offering is a confrontation between Wolverine and his long-lost brother, Dog, and is mostly flashbacks, psychological blah-blah, and improbably power sets; it’s like a time-out issue, leading back into the regular story next month, and, while it’s probably necessary from a narrative standpoint, vaguely irritating too (it’s the kind of detour that will read much better in the trade, where readers can immediately move on instead of having to wait a couple of weeks). 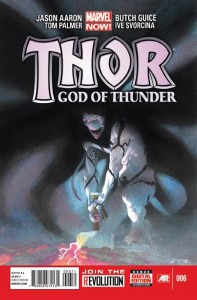 We get the origin of the God-killer guy, and Thor himself never shows up (although another Asgardian does, in diminished form); with guest art by Guice, instead of the normal Esad Ribic, it feels like a time-out issue, also, although the origin of the villain makes it more than just a fill-in. I’ve been liking Aaron’s past/present/future Thor story here, although it’s about overstayed its welcome — more than  another issue or two, and it will be traveling into Saturday Night Live sketch territory…. 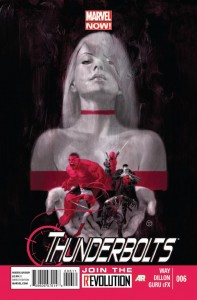 Another treading-water issue (maybe that’s the theme this week — none of the books has an actual ending, and they’re all just necessary-but-unexciting chapters in their ongoing serials). This one’s particularly annoying, because six issues in it’s apparently just at the halfway point, as our “heroes” end their adventure at one location, only to find that they have to chase the bad guy somewhere else. I don’t mind watching Dillon drawing the Punisher, Elektra, Deadpool, etc., but more action and resolution would be nice (yes, one villain’s head explodes this issue, but that’s just s.o.p. for this book, and barely worth noting…). 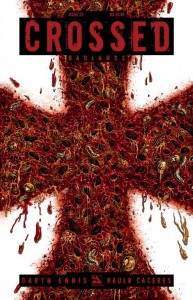 Ennis is back for a multi-chapter story, with the usual couple of gross-out scenes, as a ragtag group of commandoes roam the British Isles looking for a way to eliminate the Crossed that sounds like it’ll wipe out everyone else, too; expect more mayhem, and much talk of England and duty. Caceres’s art is just OK (he only shows some enthusiasm in one of the gross-out scenes), and this seems, based on the story’s first installment, to be minor Ennis at best; it doesn’t have the what-will-happen-next pull of his best stuff, at least not yet. 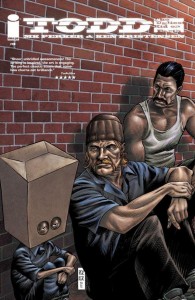 Three smaller-press comics worth a look for various reasons: Todd is a very black-humor book, sort of a cross between The Goon and Johnny the Homicidal Maniac, 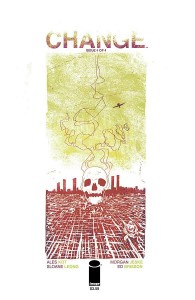 although it’s much lower-key than either of those works; it’s one of those stories where the humor derives from its naive protagonist and the endlessly-horrific things that happen to him, and four issues is just about right; any more and it would wear out its welcome. Change is… well, some kind of Lovecraftian West Coast Jungian therapy thing, I think, and while it’s had imaginative and startling images through its run, I can’t help but think the creators had no ending in mind when they began, and just kind of let it resolve itself; it ends more with a whimper than a 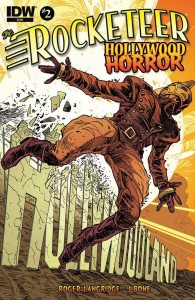 bang, but I’d read something by these guys again. The Rocketeer has a creative team that sounds like it should be great, but has been just so-so so far; Bone’s art is a little too cartoony (especially since he’s laboring in the shadow of the late Dave Stevens), and Langridge’s script has the right elements, but they haven’t gelled just yet; maybe the last half of this mini-series will stick the landing and make it all work, but right now it’s looking more like a noble and interesting, but failed, experiment. 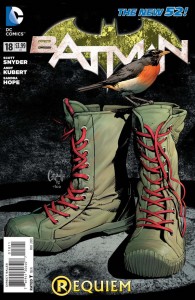 A sequel to Damian’s death in Batman: Incorporated #8, as the young woman who’s, apparently, being set up as the next Robin tells Batman to lighten up and get some sleep, and shows off her abilities; it seems a little soon for a changing of the sidekick guard, but OK — nobody’s face gets ripped off, and the “resolve” thing is kind of strange (I thought the “R” stood for “Robin” until I read the story more closely), but at least this is a one-off story, and has an actual conclusion — although it’s clear that this would-be Robin won’t be putting on an actual costume for quite a while. 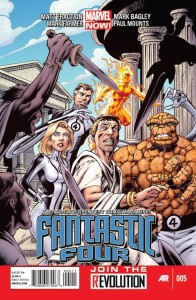 The FF go back to ancient Rome and meet Julius Caesar, as Reed fills in Sue on his real reason for their cosmic trip, and… well, again, it’s one episode in a year-long story, and it doesn’t feel like that much happens (although it looks like Caesar will be showing up in the companion FF title next, and the glowy-eyed-Ben thing must be a subplot for later); it’s a perfectly average issue with no hey-that’s-cool moments, competent but something of a disappointment from a top-tier writer like Fraction. 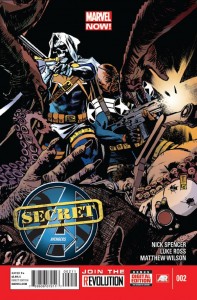 Fury recruits Taskmaster, and there’s a bunch of stuff about the growing menace of A.I.M. Island. I don’t much care about A.I.M. Island, but it’s an interesting if well-worn concept (the bad guys get their own country), and Spencer, much like Jonathan Hickman, likes to set lots of subplots simmering and then get them all to pay off later — so, yes, it’s another one of those books this week. These bridge and origin and set-up and take-a-breath issues are necessary, especially in a write-for-the-trade world, but a couple of simple, well-crafted done-in-one comics would have been a welcome change….

With 40 years of experience in comic reading, collecting and reviewing, English Professor Phil Mateer has an encyclopedic mind for comics. Feel free to ask Phil about storylines, characters, artists or for that matter, any comic book trivia. He will post your questions and answers on the AABC blog. His knowledge is unparalleled! He is also our warehouse manager, so if you are looking for that hard to find comic book, ask Phil!
View all posts by Phil →
This entry was posted in New Comics, Reviews and tagged Age of Ultron, Batman, Change, Crossed: Badlands, Fantastic Four, Rocketeer, Secret Avengers, Thor, Thunderbolts, Todd the Ugliest Kid on Earth, Uncanny x-men, Wolverine. Bookmark the permalink.