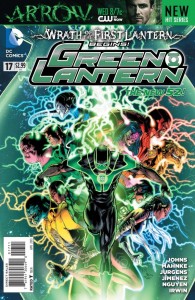 These are the first three parts of Johns’s final GL serial; he; and all the other creative teams, are leaving after that, so one expects that a number of threads involving the 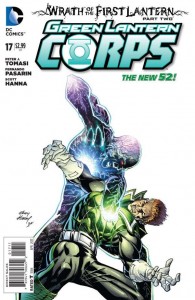 now-evil Guardians, the various colored rings, Black Hand and all manner of other subplots will get wrapped up.  The “First Lantern,” the bad guy driving the plot, can time travel, so there’s a lot of retcon possibilities getting dangled; in addition, he feeds off of emotions, so in Corps and New Guardians we get one of those deals where Guy 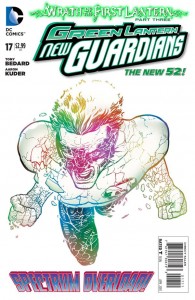 and Kyle, respectively, are reliving their pasts, and being shown alternate versions of the events there, to generate strong emotions he can suck up. The GL franchise has been the DC Universe’s second most dependable (after Batman) for a couple of years now, so it’s probably time to blow the dust off of it and regroup: let’s hope this last arc offers a satisfying finish, an opportunity for everyone to take a bow, and a clean slate and sturdy framework for the next teams. 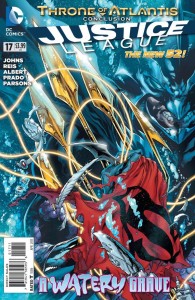 Showing why Johns is the linchpin of the whole DC 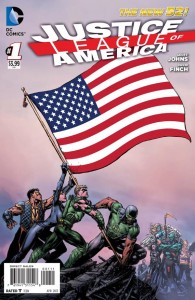 Universe right now — counting his influence on Corps and New Guardians, these make six books he’s responsible for this week. Justice League is the climax of the Atlantis-invades-the-surface crossover with Aquaman, and is just the kind of dozens-of-characters-involved punchout that plays to Johns’s strengths and finishes up his campaign of making Aquaman something more than a joke; it sets up a new direction in the Sea King’s own book, too. Justice League of America involves Amanda Waller and Steve Trevor gathering a team of heroes to serve as a counterweight to the JL main team: Johns mixes up some old JLA (Martian Manhunter, Hawkman), someone from his old run on JSA (Star Girl), a couple of bad girls 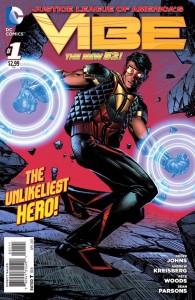 (Catwoman, Katana), one of his current characters (the Simon Baz GL), and a reclamation project (Vibe), throws Green Arrow in the mix, too, and then gives a shoutout to older fans by making the first bad guys the Secret Society (of super-villains, apparently). I’m not a big fan of the Finch art (too shadowy, and I don’t like his faces), but many fans like him, and he does handle a lot of characters adequately, so OK. Vibe #1 introduces the New52 version of the character (no breakdancing, no accent, and his vibrational powers come from an encounter with an Apokalyptic boom tube, so, really, the only thing he has in common with the original is the name and the city of Detroit), and is similarly competent-but-not-exciting; I can’t see it lasting more than 12 issues. 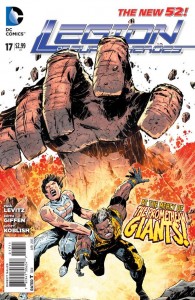 The Levitz/Giffen team has a lot of history with the LSH, and his appearance here does juice up the narrative; he’s drawing in his gonzo-Kirby style he used with Omac, and seems to be inspiring Levitz to more-energetic plot twists than the team’s experienced so far. Despite some apparently-grim developments, this book was actually a lot of fun to read, and should interest both old and new readers; it’s too bad that Giffen’s tenure will be so short (he walked off the book after two issues, for reasons that are unclear — although DC has been notorious for editorial interference with creators for the past few months). 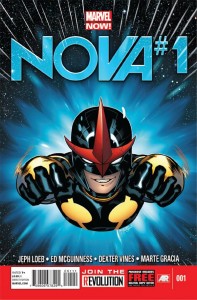 Well, this was… strange (given the creative team, a not unexpected development, but still…). We open in Carefree, Arizona (and let’s not even start on how little the setting looks like it, except for a stray palm tree) with Sam, a high school student whose dad is a drunken school janitor who claims, 17 years ago, to have been a member of the Nova corps, fighting in outer space with the Guardians of the Galaxy, including Rocket Raccoon and Gamora. Sam, of course, believes none of this, and his life is a compilation of every high-school-loser cliche known to lazy writers. All of this plays out in a way that’s, somehow, both totally illogical and completely expected. This isn’t all bad — Loeb has an undeniable knack for high-concept plots that pull in readers, however much they strain credulity — but Nova has had four previous volumes, none managing more than 36 issues, and I give this one 18 at best. 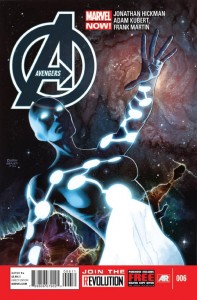 Hickman’s dense, layered plotting starts to come to the fore here, as we get a poignant origin for Captain Universe, and a mysterious interdimensional traveler whose name seems to translate to “Blackveil,” but actually is… well, read it and see, but it leads to a startling proclamation that will make sense only to those who were reading Marvel comics back in 1986. How this will all relate to the subplots already piled up in this comic is anyone’s guess, but Hickman’s work on Fantastic Four and Manhattan Project show that he usually has a clever plan — and I’d rather read his complicated constructions than Loeb’s crayon-by-numbers plots any day. 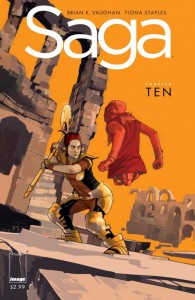 Every issue of this comic is cause for celebration, because it’s such a perfect and entertaining read — here, we get backstory on how Marco and Alana met, lots of conversations and reunions that illuminate character, and, as always, a couple of chances for Staples to showcase her art chops: a double-page splash of otherwordly, alien grandeur, and a much quieter, but more heartbreaking, final shot. This is a deserved hit, and a book that every comics fan should check out at least once. 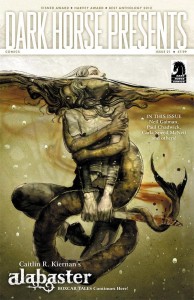 As always, the creative teams make the anthology: out of 11 stories, the standout is Paul Chadwick’s art on Neil Gaiman’s “The Day the Saucers Came,” but the Caitlin Kiernan/Steve Leiber Alabaster story, the Michael Avon Oeming Victories installment, and the Carla Speed McNeil Finder episode stand out too, while Shannon Wheeler gets the award for Best Indie Talent You’d Never Have Discovered if Not for This Book. 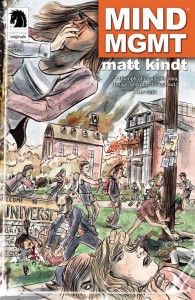 Speaking of idiosyncratic indie talents — this is a good sampler issue of this gonzo globetrotting spy-conspiracy comic, with equal parts breakneck action, intriguing backstory, and explosive climax, and all the little Easter eggs that repay close reading by its increasingly-paranoid but committed readership. Unlike Saga, this isn’t a book that every comic fan will like — but every fan should pick up at least one issue and try it, or risk missing an obsessive delight. 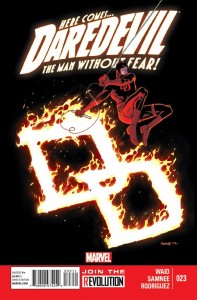 Somebody’s trying to create an army of senses-heightened Daredevils, by exposing test subjects to the toxic-waste accident that created Matt Murdock’e powers; at the same time, Matt and law partner Foggy rebuild their friendship and await the portly sidekick’s test results. A little more action and less soap opera might have been nice, but thses quieter issues lay the groundwork for the more pyrotechnic ones, and the Waid/Samnee storytelling ois so easy and graceful that even a slightly-average issue of this run proves better than almost any other comics’ top game. 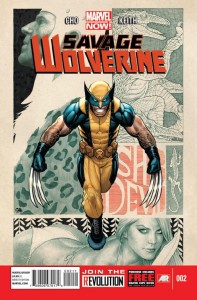 Wolvie and Shanna the She-Devil fight dinosaurs in the Savage Land. This isn’t exactly Hickman’s The Avengers, and in fact is as transparently plotted as Nova, but Cho the writer knows that Cho the artist loves prehistoric creatures and well-built women, and provides plenty of opportunity for him to draw both; the result is enthusiastic eye candy, presented with a sense of fun that’s hard for readers to resist. 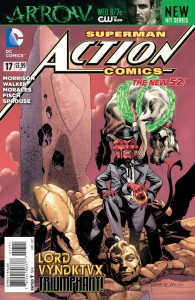 Two by Morrison; Action is his  penultimate issue (it was supposed to be the last issue of Morrison’s run, but things spilled over so much that next issue will be the double-sized finale), and it reads like five minutes right before the 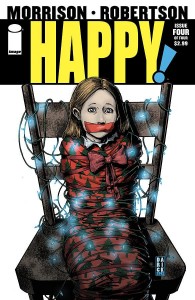 climax of a 30-minute superhero cartoon. If you haven’t read the previous issues (even if you have, come to think of it), good luck figuring out what’s going on, but buy this, save it, and then buy the next issue, and then read all 18 at once, and I bet it makes perfect, if delirious, sense. Happy is far removed from the shiny idealism of Metropolis — but not as far as it looks at first, as Morrison offers a Garth Ennis-like world of grimly humorous violence leavened by redemption. This final issue is entertaining enough, but goes pretty much exactly as expected.

Stuff I bought and liked, but have nothing new to say about, so read previous reviews in the archives if you’re interested: 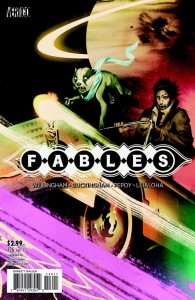 With 40 years of experience in comic reading, collecting and reviewing, English Professor Phil Mateer has an encyclopedic mind for comics. Feel free to ask Phil about storylines, characters, artists or for that matter, any comic book trivia. He will post your questions and answers on the AABC blog. His knowledge is unparalleled! He is also our warehouse manager, so if you are looking for that hard to find comic book, ask Phil!
View all posts by Phil →
This entry was posted in New Comics, Reviews and tagged Action Comics, Avengers, Daredevil, Dark Horse Presents, Geoff Jjohns, grant Morrison, Green Lantern, Justice League, Legion of Super-Heroes, Mind Mgmy, Nova, Saga, Vibe, Wolverine. Bookmark the permalink.