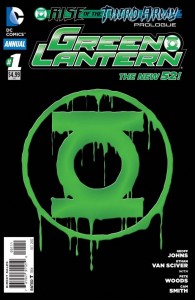 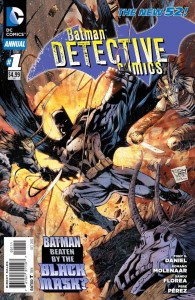 DC came out with a number of annuals this week, and they’re fascinating because of the different approaches they offer to the genre. Detective is the most old-school: it offers a complete, stand-alone story, bigger than the regular comic could hold (38 pages), with two established villains and a lot of action and cinematic sweep (three splash pages, and four double-splash ones). You can tell that Daniels still thinks like an artist — he gives his penciller plenty of opportunity for visual pizzazz — but he needs seasoning as a writer; the motivations of the bad guys are fuzzy, as are the mechanics behind some of the 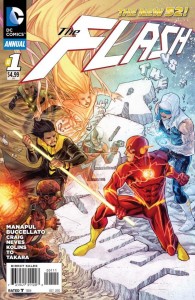 scenes. Still, this is a nice-looking package, and a satisfying chunk of story. The Flash Annual is much more connected to the regular comic — it starts with a cliffhanger from the previous issue, resolves it, and then sets up a new conflict for the next issue — so readers who pick up this story without having followed the regular book will be lost. Manapul, like Daniels, uses his extra space effectively, by offering his artists (there are five chapters to the story, with a different artist/team for each, although Manapul provides continuity by doing the breakdowns for all of them) plenty of opportunities for splashes and big fight scenes, while also filling in a number of background details left unstated in the monthly issues.

Green Lantern takes a different tack, one familiar to Johns fans: it’s the first chapter of a big crossover event involving the next four issues of all four Lantern titles, one where the Guardians finally let their fascist tendencies loose, and decide to take over the universe. No resolution or complete story here; the point is to get readers excited enough to read the next 16 chapters of a larger story. Justice League International does something similar, but from a different angle: it ends the group in its title (there will be no more issues of JLI, and fans of Booster Gold, in particular, will not be happy with the plot), but connects closely to events at the conclusion of the current Justice League #12, and hints at larger forces at work that will play out in that title over the next year; no surprise, given Johns’s presence both here and in JLA. 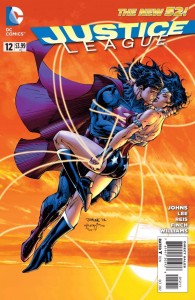 Lots of media attention to this title, because of the cover kiss (which occurs near the end of the book, and turns out to be a major plot device over in the JLI Annual too), although the story itself is mostly about the resolution of the previous “Graves” plot. Because it starts in the middle, new readers won’t have much idea what’s going on, and the multiple inkers don’t help (seriously: nine inkers? For 29 pages of art? That’s not the best way to show off Lee’s pencils, guys…), but Johns’s talent at promotion and interest-building is evident as much here as in the GL Annual — there’s a lot of non-lip-related movement over the last few pages, as the JLA’s public image is broken, a member quits, and then we get a few pages of hints about coming plots, ending with a double splash of the “new” team that’s sure to set off fireworks and passionate discussion among fans — exactly the point, of course, and one of the storytelling aspects that Johns is so good at: love him or not, it’s hard not to look forward to the next episodes of his various superhero soap operas. 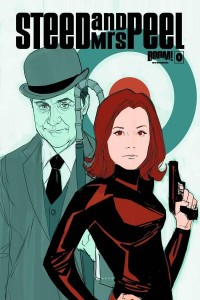 This is based on the ’60s British TV import The Avengers, which for obvious reasons Boom! can’t use in the title; Bryant’s art is just OK (he’s not that good with faces, a serious problem with a book based on well-established real-life characters like this), but Waid’s script is dead-on: affectionate, knowledgeable and with just the right mix of ironic humor and drama that the original show thrived on. I’m not sure of the audience for this book (how many fans of the original show are out there, anyway, and will anyone else care?), but I’m exactly the target reader, and I enjoyed it quite a bit. 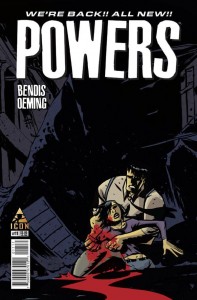 This title, on the other hand, I used to like, but it’s fallen on hard times. Its erratic schedule is bad enough, but understandable — Bendis needs to work on the stuff that actually brings in money, after all, and this is a labor of love. The larger problem is that this issue throws a bunch of cosmic stuff at the reader (floods! deaths! gods!) in order to clear the decks for the comic’s next incarnation (as Powers: Bureau, where Walker and Pilgrim are FBI agents instead of Chicago police detectives), and it’s all too much too fast, especially when the gap between issues makes it impossible to remember what was going on in the first place. Here’s hoping the next version will have more more structure in both its plots and its release times, so that readers will have an easier time enjoying it again. 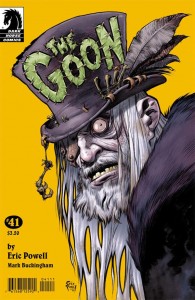 Powell’s nothing if not versatile — last issue was all about the good-ol’-boy moonshine humor, channeling Prohibition-era rumrunning and Big Daddy Roth rat-fink hijinks in equal number. Here, the emphasis is on Powell’s other strength: horror, the kind that comes from human corruption, ruined relationships and dark magic that boomarangs back on its purchaser; while there’s still humor, it’s as grim as retribution. After a long hiatus, it’s great to see this title back, with batteries recharged and Powell’s storytelling chops good as ever.

Worth mentioning especially for fans of Marvel’s old Exiles series, because that’s really what this is: alternate versions of various X-characters and associates, plucked from other dimensions where events traveled down different paths than the “real” Marvel Earth, and tasked with setting things right. Pak has the continuity chops and the light touch needed to keep things lively, and the fact that the characters aren’t “our” versions (except for Alison Blair/Dazzler) means that any terrible thing can happen to them — a useful method for keeping readers on the edge of their seats. 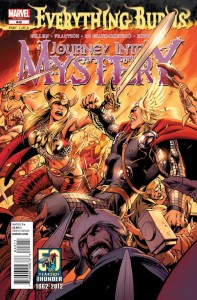 This begins a six-part crossover between this title and Thor (with the next four installments scheduled to ship weekly) that involves the fiery demon Surtur, just about everyone in Asgardia and Hel, and a number of Loki’s well-intentioned schemes coming back to bite him; since its conclusion will mark the end of this incarnation of the book (JIM will continue, but will feature the adventures of the Asgardian woman warrior Sif instead), the fate of its young trickster god is decidedly up in the air. Will it end with him dying, again? Will he revert back to his older, evil, boring self? Let’s hope not, since this version has been so appealing; in any event, the reader is in capable hands with Gillen and Fraction at the helm, and it should be an entertaining, if bumpy, ride. 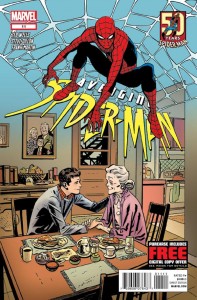 This is the kind of Spidey story you’ll either love or hate: it’s mostly Peter and his Aunt May in the cemetery, on the anniversary of Uncle Ben’s death, reminiscing (there’s a little action, but only in flashbacks). As a 50th-anniversary tale, it’s not a bad idea — especially since artist Steve Dillon is good at keeping the visuals smooth and interesting, even when it’s mostly just the characters talking — but readers expecting action instead of quiet introspection should go elsewhere. 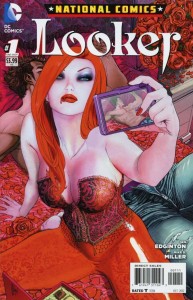 This is the former Batman and the Outsiders character (although that connection looks to have been retconned away in the new DC universe — and so much for the idea that the “National” branding is only for characters from that ’40s-era title’s publisher); she’s a former fashion model who ran astray of a vampire, and now uses those powers to… well, not do much yet, but by the end of this story she’s on a more heroic path. Not a bad origin, with Edginton offering a supple, sophisticated script and Miller’s art suitably fashion-conscious and monstrous, as the plot requires; as a tryout for a new series, this offers enough oomph to be encouraging. 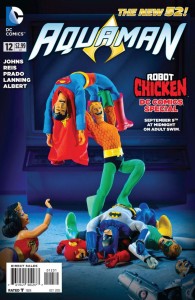 Stuff that I bought and liked, but have nothing new to say about, so read previous reviews in the archives if you’re interested: 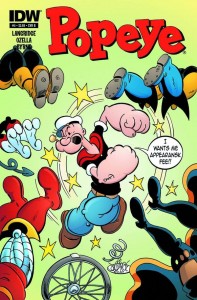 I’m not a big cover-variant fan, but my God — that Robot Chicken version is impossible to pass up….

Alternate cover by John Byrne — which explains why Popeye is pummeling various X-people.

With 40 years of experience in comic reading, collecting and reviewing, English Professor Phil Mateer has an encyclopedic mind for comics. Feel free to ask Phil about storylines, characters, artists or for that matter, any comic book trivia. He will post your questions and answers on the AABC blog. His knowledge is unparalleled! He is also our warehouse manager, so if you are looking for that hard to find comic book, ask Phil!
View all posts by Phil →
This entry was posted in New Comics, Reviews and tagged Avenging Spider-Man, Detective Comics, Flash, Green Lantern, Journey into Mystery, Justice League, Looker, Powers, Steed and Mrs. Peel, The Goon, X-Treme X-Men. Bookmark the permalink.

One Response to Phil’s Reviews: Stuff I Bought #230