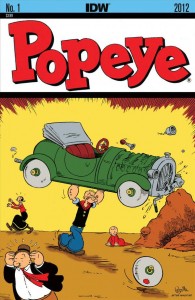 Back in the ’70s, when I was first discovering America’s long, rich history of newspaper comics, E. C. Segar’s Thimble Theater, the strip that birthed Popeye in 1928, was one of my first encounters, and it was a revelation: tough, funny, adventurous and told with a sureness of line and vision that puts it in the top ten of everybody’s best-of lists. This new comic doesn’t reach that peak, but it comes closer than anyone else has since Segar’s death in 1938: Ozella gets the scruffiness of the characters right, and while he can’t quite match Segar’s fluidity, he handles both slapstick and suspense with 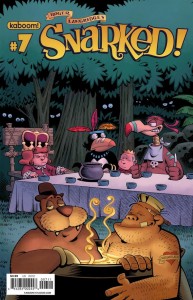 equal skill (and gets bonus points for doing his own lettering, and nailing it, to add a retro charm to the words). Speaking of words, the bigger strength here is Langridge, an inspired choice for writer: he knows his history (Popeye’s first words here echo those of his first appearance in Segar’s strip, and the next panel name-checks Bill Blackbeard, the comics historian who wrote the introduction to that first book reprinting the one-eyed sailor’s adventures that I bought 40 years ago), and he gets everybody’s dialogue just right; he even duplicates Segar’s habit of breaking the speech into a series of small, self-contained balloons. Langridge also publishes his own series, Snarked, the charming Lewis Carroll-inspired adventure that owes something to Segar in its combination of comedy and adventure, and that’s out this week, too, but I’ve sung its praises before; if you’re going to try one new book this week, make it Popeye — just a look at that cover, and the careful way it pays tribute to Action Comics #1 while still being quintessentially Popeye (and, in addition, managing to get the colors and the logo exactly right), should be enough to seal the deal. 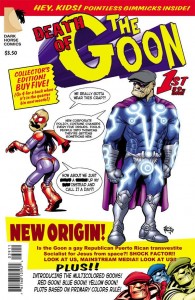 Speaking of good covers… this one promises exactly what the book delivers: a takedown of mainstream superhero comics. OK, as a topic of parody that’s easy pickin’s, and a little ’90s to boot, but then so are superhero comics right now, in their endless crossover events and attempts to goose sales, and Powell is just the guy to cheerfully, and scatologically, eviscerate them.

Speaking of crossovers… here we have three Avengers vs. X-Men books. AVX: Vs. confused me at first, because I thought it was a reprint of the actual Avengers Vs. X-Men #1 (the logo makes it look like they did it on purpose to increase sales; if so, it backfired, because I almost didn’t pick this up at all). This is new material, though, and it’s actually a lot of fun: its purpose is to present two expanded fights per issue, ones the “real” story doesn’t have space to show; as the first page tells us, “This book is about AWESOME BRAWLING! You want PLOT? LOOK ELSEWHERE, CHUM. You want a KNOCK-DOWN, DRAG-OUT WHUPPIN’? WE GOT 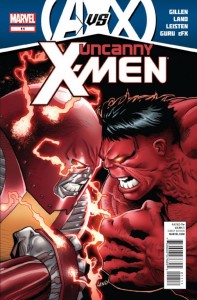 YOU COVERED.” The joke is that the creative teams are actually better than that — the Magneto/Iron Man fight in the first half is all action, but it’s not mindless; Aaron and Kubert make it clever and sympathetic to both sides. The Namor/Thing battle, while not as clever (and suffering from a “win” that doesn’t even last beyond the final panel), has the Immonens providing enough good dialogue and cool undersea art to zip it along nicely. If you’re enough of a fan to be following the main series, you’ll definitely want this too.

Of the other two tie-ins, Uncanny X-Men is the most connected to the main story. Gillen seems to be trying mightily to avoid the mistake of Civil War (for that story to work, the main heroes on the “government” side, Tony Stark and Reed Richards, had to act like complete buttheads, and then Marvel had to spend years fixing them, especially Stark) by showing Cyclops’ position as inevitable, given his responsibilities to 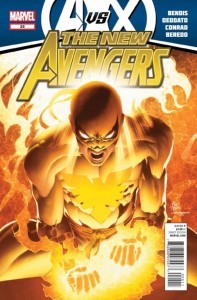 his people — although when the Sub-Mariner spends the first few pages admiring your negotiating technique, you know you’ve left diplomacy far behind. At the same time, there’s a big Red Hulk/Colossus-as-Juggernaut fight, so the AVX: Vs readers have something to enjoy, too.

There’s no fight at all in New Avengers — instead, we get a lot of backstory connecting Iron Fist’s ancient city, K’un Lun, to the Phoenix Force and its propensity for red-headed females as avatars. This would be boring except for the intriguing connections it suggests, especially given the intricate, cool-looking art by Deodato — and if you’re tired of all the punching in the other two crossovers, it offers a good palate cleanser. 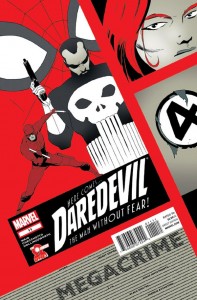 The conclusion to the three-part connected story between this book, Spider-Man and the Punisher. Kind of annoying, in that at the end the status remains quo, but it’s fun to see the interaction between the three main characters, given their long histories with each other, and Waid delivers a good story as always. The art isn’t quite as good as it’s been, but the letters page says that Chris Samnee’s coming on board next issue, and that Paolo Rivera’s coming back, too, so there’s plenty of reason to continue buying this comic. 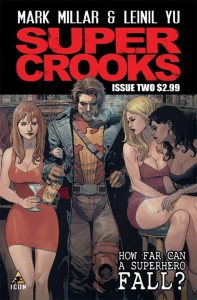 This looks like it’s evolving into a caper story — Ocean’s Eleven with super-powers — which is fine by me; Millar’s clever enough to make something like that work, although his propensity for cynical shock endings might screw it up, and with only two issues to go the gimmicks can’t be that elaborate. Yu’s turned into a good match for Millar’s style — see Superior — and the advantage of only two issues left is that it’s easy for readers to commit and see what happens, so I’m still on board. 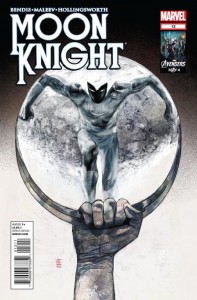 The end of the book, and of Bendis and Maleev’s attempt to make MK popular — the multiple-personality hook kept me around, as did the gritty LA locale and the power imbalance between the hero and the main villain, but apparently not enough readers agreed. In retrospect, this will probably be most remembered for its death of a minor Avengers character and for its maguffin: the head of an Ultron, which looks like it’s helped to lay the seeds for Bendis’s Age of Ultron, his swan song for his run on the Avengers, coming… next year? With AVX in full swing, no one wants to hear about future events right now, but stay tuned…. 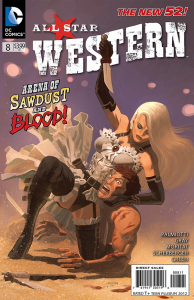 Stuff I bought but don’t have anything new to say about, so read earlier reviews in the archives if you want to know why it’s good: 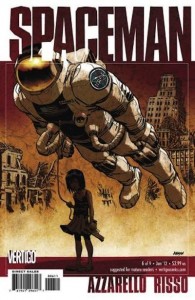 With 40 years of experience in comic reading, collecting and reviewing, English Professor Phil Mateer has an encyclopedic mind for comics. Feel free to ask Phil about storylines, characters, artists or for that matter, any comic book trivia. He will post your questions and answers on the AABC blog. His knowledge is unparalleled! He is also our warehouse manager, so if you are looking for that hard to find comic book, ask Phil!
View all posts by Phil →
This entry was posted in New Comics, Reviews and tagged Avengers, Daredevil, Eric Powell, Moon Knight, Popeye, Roger Langridge, Snarked!, Super Crooks, The Goon, X-men. Bookmark the permalink.