It Came From the Back Room #47 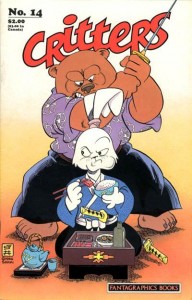 Standard recap: I’m slowly going through AABC’s one-million-plus back-issue room, restocking the boxes on the sales floor and pulling stuff to sell as discount/overstock/special items (these are featured at the discount racks at the west end of the store for a couple of weeks after each post, and then go to the discount racks on the east end of the store for a few weeks, and then disappear into our warehouses, so get them while you can). I’m going through the alphabet backwards (don’t ask), and at my speed (especially with the school semester in full gear), this amounts to a two-and-a-half-year project.  This week, we’ve finally made it to the letter “C,” so let’s start with the independent/smaller company titles, since these offer some obscure-but-interesting bits of comics storytelling. Case in point: 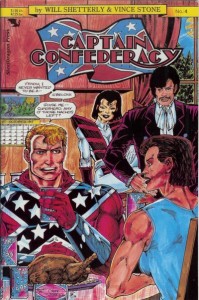 Published by Steeldragon Press, this came out in 1986, and was part of the black-and-white explosion of the mid-’80s — appropriate, since, as the title should make clear, it’s an alternate-earth book about a world where the South never lost the Civil War, and the Confederacy still exists. The title character’s part of “Project Hero,” a pr-driven effort to create a white media hero to keep the “colored” agitators in their place. The art, by Vince Stone, is semi-professional at best, but the script, by Will Shetterly, manages to avoid most of the obvious potholes in the concept, and offers a couple of intriguing characters to whet the reader’s interest (Shetterly’s still around, and has had a modest career as an sf novelist, although he never returned to comics; I have no idea what happened to Stone). The comic published 12 issues, a decent run for an indy title, and in 1991 managed a four-issue mini-series at Marvel’s Epic Comics line, so its profile’s a bit higher than most of its peer books from this period.

Harlock is a noble space pirate, a Japanese manga/anime character who’s been around since the ’50s. He was created by the manga master Leija Matsumoto, but these comics aren’t translations; they’re new stories, written by Robert Gibson and drawn mostly by Ben Dunn, who’s managed a long career with his simplified, slightly-Americanized Japanese style (he’s probably best known for Ninja High School, although superhero fans may remember him as the creative force behind the first Marvel Mangaverse books, in 2002). Captain Harlock was published by Eternity Comics  starting in 1989, and lasted until 1992 — according to Wikipedia, it ended, not because of sales, but because it turned out Eternity didn’t have the rights to it (the guy they’d purchased them from turned out to be an impostor, who’d then disappeared into the Japanese night). The comics are interesting as examples of the second Great Manga Wave in the US, prompted by the success of the Robotech cartoons on TV (the first wave was in the ’60s, prompted by Astro Boy and Speed Racer, but that’s a subject for another post…). 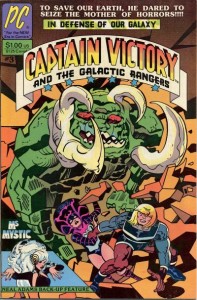 This is the most well-known of the indy “Captain” books, because it’s by the most well-known creator: King Kirby himself, who, always on the cutting edge of comics publishing, saw the possibilities in Pacific Comics and its early-’80s push to create a non-Big Two comics market; lending his name and prestige to the fledgling company helped to establish them as major players. This is energetic space opera, typical Kirby in the way it shows an American small town coping with “Galactic Rangers,” who arrive to protect it (and Earth) from an invasion of “Insectons,” a hive-like race bent on colonizing the planet. There’s lots of action, musings about the role of the soldier, and inappropriately bold-faced type; although the book wasn’t a huge hit when it appeared, it’s aged well, and is definitely worth a look today, especially with the issues available at a buck each. 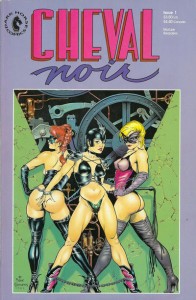 This is a Dark Horse anthology from 1989 through 1993, very Heavy Metal-ish; it ran for 48 issues, and they’re 68 black-and-white pages by a slew of fantasy and sf-related European and American artists, existing together in happy collaboration (look at the first issue: an ultra-sexy Dave Stephens cover, a frontispiece and spot illos by Geoff Darrow, interior stories by Phillipe Druilett (“Lone Sloan”) and Tardi (“Adele”), plus “Angel Fusion,” a manga work by Hiroyuki Kato and Keisuke Goto, and a few other stories too). The emphasis is on beautiful linework, and any connoisseur of comics art can pick up an issue at random and be impressed: here, there’s a Moebius story; over there, something by Brian Bolland… or Michael Kaluta… or John Bolton… or Kelley Jones… or Mike Mignola… or… well, there’s a lot to occupy your eyeballs, most of it stuff you’ve never seen before, and all a treat. 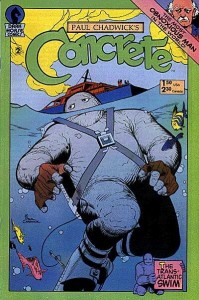 This is Paul Chadwick’s creation, a former speechwriter named Ron Lithgow who gets captured by aliens and has his brain transplanted into a 1200-pound stone body. He escapes them and survives; the good news is that he has extraordinary sight and stamina, while the bad news is that he’s trapped in a massive body with almost no sensation. Given the pulpy origin, the stories are surprisingly human and smart, with a lot of philosophical musing and an interesting and attractive supporting cast. Early appearances of the character were in Dark Horse Presents in the late ’80s; in 1987 he got his own book, won a slew of Eisner awards, and has appeared in occasional mini-series ever since, the most recent being The Human Dilemma, in 2005. The awards are well-deserved, and the comics are a revelation, with both art and script working together seamlessly to tell compelling, carefully-constructed stories that refuse to accept easy plot twists or resolutions. Check these out; they’re exactly the kind of cheap-thrill hidden gems that the cover-price racks are meant to provide. 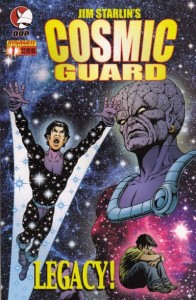 Typical Jim Starlin cosmic stuff (as if the title didn’t already reveal that), about an orphan kid who gets fantastic mystical powers and is pulled into an intergalactic war. Starlin’s an old hand at this space-opera stuff, and the polished art and script offer a professional, if familiar, ride.

These are from IDW, and mostly from the show’s heyday in the early and mid-2000s; the high point is the Dying in the Gutters mini-series, wherein there’s a murder at a Los Vegas comic book convention. The hook is that all the characters are actual comic pros (the victim is online rumor-monger Rich Johnston, of Bleeding Cool News, and the prime suspect at first is Joe Quesada, although Ed Brubaker, Peter David, the Kubert brothers, Greg Rucka and others all make appearances). The art’s just OK, but the story’s clever, and the photo covers involving the show’s cast are perfect for fans of the series. 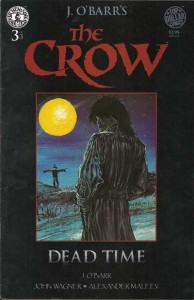 James O’Barr’s Goth-flavored revenge fantasy, from 1989, probably would have slipped quietly into obscurity, except that it got optioned as a movie, and Bruce Lee’s son Brandon died in an accident during filming in 1993. Ala Heath Ledger, that gave the film enough publicity to make it a cult hit, and the comic managed a number of mini-series (and a ten-issue Image ongoing series) throughout the ’90s. The ones with O’Barr scripts have an interesting, morosely poetic vision, and the Wild Justice mini-series has art by Charlie Adlard, of Walking Dead fame; otherwise, one’s pretty much like the other, but if you wore out a lot of black eyeliners during high school, these are worth a nostalgiac look. 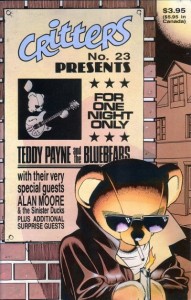 A funny-animal anthology from Fantagraphics that lasted for 50 issues in the mid-to-late ’80s. As with Cheval Noir, there’s a lot of unexpected pleasure here — chief among them a number of Stan Sakai’s Usagi Yojimbo stories in the early issues, but there’s also work by Sam Kieth, Scott Shaw!, Freddie Milton, and others; the high point is probably issue #23, which has an Alan Moore story and a Flexi-disc with music from his band on it (of course, you need an actual record player to be able to hear it…). 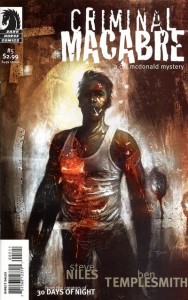 This series features Cal McDonald, a Steve Niles creation who’s a hard-boiled occult detective, and he’s been around in various mini-series for about ten years now (he’s currently being serialized in Dark Horse Presents, and just had a one-shot published, too). The early issues have art by Ben Templesmith, and later artists include Kelley Jones, so there’s almost always interesting art to go with the note-perfect scripts.

That’s it for this week, but a final note: these books will only be on the discount racks for a week, until Friday, May 4, because the store will be putting out Free Comic Book Day books on those racks on Saturday the 5th. The “C” stuff will be back the week after that, though, so if you don’t get a chance to look them over in the next few days, just be patient.

With 40 years of experience in comic reading, collecting and reviewing, English Professor Phil Mateer has an encyclopedic mind for comics. Feel free to ask Phil about storylines, characters, artists or for that matter, any comic book trivia. He will post your questions and answers on the AABC blog. His knowledge is unparalleled! He is also our warehouse manager, so if you are looking for that hard to find comic book, ask Phil!
View all posts by Phil →
This entry was posted in Comics History, News & Promos, Reviews and tagged Captain Confederacy, Captain Harlock, Captain Victory, Cheval Noir, Concrete, Criminal Macabre, Critters, Crow, CSI, Jack Kirby, Jim Starlin, Usagi Yojimbo. Bookmark the permalink.