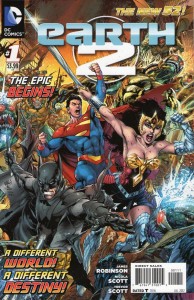 These books are inter-related, with Earth 2 best read first; as its name implies, it’s setting up the alternate DC Earth that contains a modern-day version of the Justice Society. The first issue, though, focuses on death instead of birth: it shows a world where the only super-heroes who exist are Superman, Batman and Wonder Woman — plus a Supergirl, and a Robin who’s Batman’s daughter. That 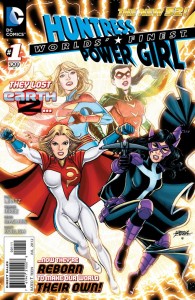 turns out not to be enough to hold off an invasion from Apokalips (we see parademons and Steppenwolf, but Darkseid is never mentioned) — at least, not without the ultimate sacrifice from all three heroes, leaving a world without superpowers — until the last page, when recent college grad Jay Garrick gets a visit…. Robinson does a good job with this, hitting all the emotional buttons well (this is much closer to the quality of Shade than that horrible Justice League mini-series from a few years ago) and the Scotts handle the (literally) apocalyptic battles and quiet spots with equal elan.

Even better is Worlds’ Finest, because Levitz and Perez are about the best old-school team DC has to offer. Levitz is a subtle and expert writer (note the apostrophe placement in the title, making “worlds” plural), and this is the tale of the Earth 2 Supergirl and Robin, who end up stranded on the main DC earth after the events in Earth 2 #1, and become Power Girl and the Huntress. Perez, of course, is stellar as always, and there’s the added attraction of Kevin Maguire, who supplies the art for the 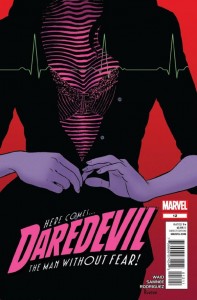 Earth 2 flashbacks. Pick up both of these books; they’re entertaining and effective, and give a hopeful start to the next wave of DC’s lineup.

After the excitement of last issue’s Spidey/Punisher crossover, this is mostly a quieter issue, as Matt Murdock goes on a date with assistant DA Kirsten McDuffie, and tells her a story about how he and Foggy bested a law professor in their college days. The Samnee art is a treat, well-suited to the quiet humor of most of the book; it’s a sign of Waid’s talent as a scripter that he’s been able to 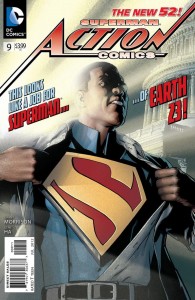 lure so many letter-perfect artists to this book.

A one-shot tale of the Superman of Earth-23, who’s… well, not exactly Barack Obama, but an African-American who’s also President of the US, so the comparisons are inevitable. Morrison eschews most of the obvious political commentary, though, and instead concentrates on world-building, showing how this character got where he is, and making us care about him and his supporting cast. It’s a nice change-of-pace issue, without the multi-episode 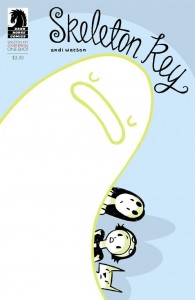 complications of the regular book (although, Morrison being Morrison, I’m sure these characters will show up as part of some uber-plot somewhere down the road…).

Schoolgirl Tamsin and her companion, the fox spirit Kitsune, have the magical key of the title, which opens doors to different worlds and eras; they’re lost and trying to find the right path home, and have various adventures along the way. This comic reprints three of their recent stories, from Dark Horse Presents #5-7, involving a graveyard dance troupe, a hotel haunted by a ghost, and an infinite museum. Imaginative and charming, these are wonderful little tales, and if you missed these because you were too cheap to drop $8 an issue on the DHP anthology (although that book is totally worth it, too), then spend the 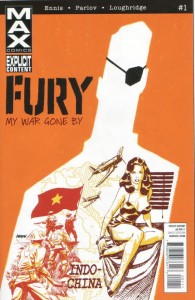 The team responsible for the best and longest run in Punisher history returns for a Nick Fury mini-series, as the old warrior dictates his memoirs. This issue is set in Indo-China in 1954, and has all the political intrigue, grizzled war veterans, femme fatales and cynical maneuvering you could want; it’s like Terry and the Pirates, but with more swearing and all the innosence bleached out, and as with all of the best Ennis, it’s a lot of nasty fun. 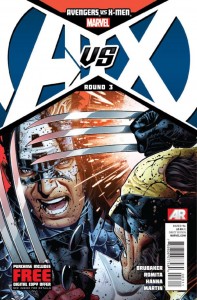 Everybody’s trying to track down Hope, and Wolverine has a polite disagreement with the Avengers — not because he wants to sympathize with the X-Men, but because he wants to solve the Phoenix problem in a way neither team wants. Brubaker’s scripting somehow makes it work better than in the first two issues (the puppet strings over the characters, as they all do what the plot requires of them, are much less visible here), and the Romita Jr. art, as always, makes it all go down easy.

Worth noting because comics that are kid-friendly and smart are rare, and because Evanier, who’s been the director of the Garfield cartoons since… well, forever, is the perfect choice to add sly comics-related satire, and get all the characters’ voices and personalities just right. Barker has been an assistant on the Garfield newspaper strip for a long time, too, and probably draws the fat cat and his supporting cast better than Jim Davies at this point, so this is a perfect package, whether you’re a fan yourself or want to buy something cool for a younger reader you know. 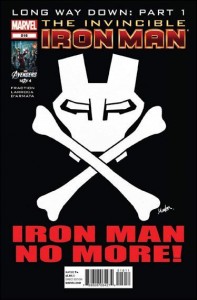 Stuff I bought but don’t have anything new to say about, so go look up earlier reviews in the archives if you’re interested: 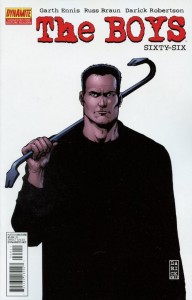 With 40 years of experience in comic reading, collecting and reviewing, English Professor Phil Mateer has an encyclopedic mind for comics. Feel free to ask Phil about storylines, characters, artists or for that matter, any comic book trivia. He will post your questions and answers on the AABC blog. His knowledge is unparalleled! He is also our warehouse manager, so if you are looking for that hard to find comic book, ask Phil!
View all posts by Phil →
This entry was posted in New Comics, Reviews and tagged Action Comics, Avengers, Daredevil, Earth 2, Garfield, Nick Fury, Skeleton Key, World's Finest, X-men. Bookmark the permalink.