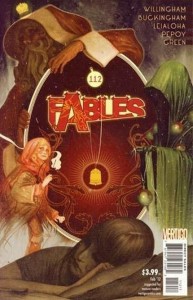 In a week that’s a holiday gift to readers — after what’s turned into a great year for comics, there were at least a dozen noteworthy ones just this Wednesday — Fables gets first position this week because it’s a Christmas story, of sorts. While we check in with most of the current subplots (but not the one involving Bufkin, Willingham leaving his fate, literally, hanging), the main thread involves Rose Red and a story about hope, taking its structure from A Christmas Carol and featuring Santa Claus and the Little Match Girl, among others. After almost ten years, this continues to be one of the best-told and best-looking serial stories out there, and if you’re still one of those fans who’s never read it this would make a great gift to yourself, as a

taste of what you’ve been missing.

I’ve sung the praises of this book quite a bit — and, just this week, covered its earlier ’80s-’90s incarnation in It Came From the Back Room — but this issue outdoes itself: Usagi Yojimbo by Stan Sakai; Hellboy by Mike Mignola; Skeleton Key by Andi Watson; Finder by Carla Speed McNeil; chapters of serials by Neal Adams and Howard Chaykin; a new story by Brandon Graham (of King City critical praise); and three other tales. It’s a Christmas stocking with ten great gifts in it, all on glossy paper and with coloring that makes the stories gleam and pop, and at

$7.99 it continues to be the best bargain in the store.

This is a Christmas story, too, a one-shot episode that’s a little corny (a bus full of blind kids that overturns far out in the country during a blizzard), but perfect for the season, and heart-warming and entertaining in equal measure. Check out that cover, too: a perfect summary of the unexpected joys of this book, both visually and conceptually, and proof that, with Waid and Rivera, it continues to be in very competent hands. 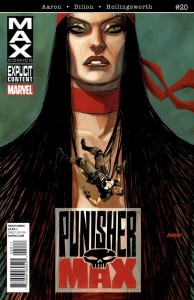 Three by Aaron this week, all worth reading: 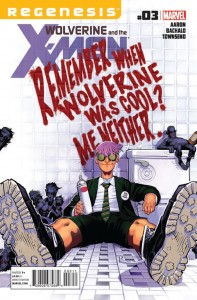 PunisherMax features a long and brutal battle between Castle and Elektra, as his two-year-long encounter with the Kingpin is winding down, in predictably bloody fashion, and signaling the end of both their fight and the book itself; the Dillon art makes it the best of the pack. Wolverine and the X-Men isn’t far behind, though — the Bachalo art would have made it the best, except that, as you can see from the credits, he got a lot of help, and the inconsistency sometimes shows; however, this has the best story, as it concludes the title’s

first arc with the wry humor and dynamic, intriguing cast of characters that’s quickly turned it into the most fun of all the X-books. Wolverine is the least of the three, having the most pedestrian art, but it still delivers Wolverine, now in New York City, vs. the Kingpin vs. the Yakuza, with mutant cannibal hillbillies and Logan’s juggling of three current and former romantic interests helping to spice up the mix. At this point, Aaron’s one of the top three go-to writers at Marvel (Matt Fraction and Bendis being the others), and his knack for combining fun, drama, comedy and adventure may make him the best. 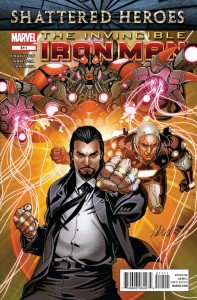 Speaking of Fraction… we’re early in a new serial, as the Mandarin continues to turn the screws (via the Living Laser and Obadiah Stark, among others), but watching Tony facing various perils, and checking in with the varied and well-drawn cast members (Pepper and Bethany Cabe have the best encounter here, although Splitlip the dwarf (er… dark elf) is going to be a scene stealer) gives the 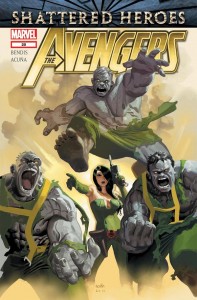 reader plenty of reasons to keep buying this book.

And speaking of Bendis… Avengers sees the team splitting into groups to go hunt Norman Osborn, with predictably 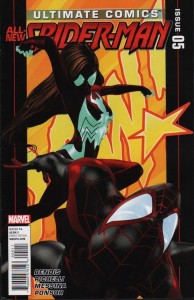 bad results (it being still early in the story), and three separate cliffhangers; it’s fine but pretty standard, especially if you’ve been following the title for the last five or six years of the Bendis era. Ultimate Spider-Man seems more enthusiastic and less been-there-done-that, as it’s devoted to Miles and his first encounters with Spider-Woman, Nick Fury and Elektro; Pichelli doing only layouts makes the visual appeal less than when she’s doing the full pencils, but it’s still a good-looking book, especially in the fight scenes. 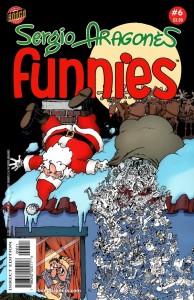 No, of course not really… it’s the usual combination of gags, longer Plop-like stories, autobiography, and games from Aragones, and the only reason it’s not higher on this list is because I’ve already praised it so much in earlier posts: suffice it to say, though, that the art continues to be wonderful, and that you’re missing a lot of good 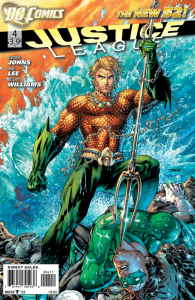 storytelling if you’re not getting this book.

Aquaman and a fully-formed Cyborg enter the mix — meaning that for the first time the full team from the cover of issue #1 is together —  and the big bad guy is revealed on the last page. Four full issues in, that’s not exactly compressed storytelling, but this book knows exactly what it’s doing, and it’s going to be a perennial best-seller as a trade, and I’d tell you to buy it, but, really, right now who 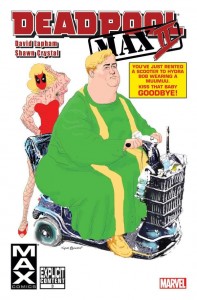 Kyle Baker not drawing this book makes it a throwaway, although it’s almost worth it for that cover: brownie points to the first person who writes in with the title and issue number of the book that it’s… well, “parodying” isn’t the right word — maybe just “echoing”? 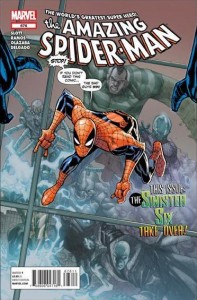 No actual appearances by the Wallcrawler — or even Peter Parker — in this issue, as the Sinister Six (with the Rhino and the Chameleon subbing for original members Vulture and Kraven) take on the Intelligencia (that’s the brainy-villain group from The Hulk, consisting of M.O.D.O.K., Red Ghost, Mad Thinker, Wizard and Klaw), as a taste of what’s to come in 2012 for the Spidey-verse. Ramos and Slott make this as dependably entertaining as ever, and in a normal week this would have been a lot higher on the list — but, as I said at the beginning, it was an awesome week for comics, a fitting almost-end to a good year in graphic storytelling. Merry Christmas, everyone!

With 40 years of experience in comic reading, collecting and reviewing, English Professor Phil Mateer has an encyclopedic mind for comics. Feel free to ask Phil about storylines, characters, artists or for that matter, any comic book trivia. He will post your questions and answers on the AABC blog. His knowledge is unparalleled! He is also our warehouse manager, so if you are looking for that hard to find comic book, ask Phil!
View all posts by Phil →
This entry was posted in New Comics, Reviews and tagged Avengers, Daredevil, Dark Horse Presents, Deadpool, Fables, Iron Man, Justice League, Punishermax, Sergio Aragones, Spider-man, Ultimate Spider-man, Wolverine and the X-Men. Bookmark the permalink.