It Came From the Back Room #38 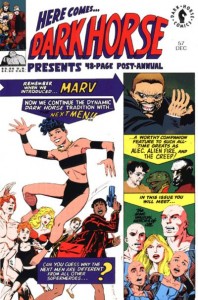 Standard recap: I’m slowly going through AABC’s one-million-plus back-issue room, restocking the boxes on the sales floor and pulling stuff to sell as discount/overstock/special items (these are featured at the discount racks at the west end of the store for two weeks after each post, and then go to the discount racks on the east end of the store for a few weeks, and then disappear into our warehouses, so get them while you can). I’m going through the alphabet backwards (don’t ask), and at my speed (especially with the school semester in full gear), this amounts to a two-year project.  This week, I’ve finally made it to the letter “D,” beginning with all the indy-publisher “D” titles: 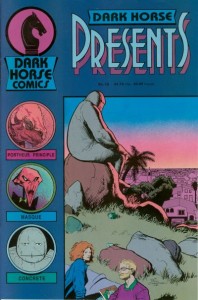 Of these two anthologies, Presents is both the earliest and the longest-lived; it ran 157 issues between 1986 and 2000 (and just started a well-received second volume this year), as compared to Dark Horse Comics’ 24 issues between 1992 and 1994. Both series had the same format: three 8-10 pages installments of various serials each issue; the difference was that Comics was in color, and so higher-priced than the black-and-white Presents. Presents can be quite a find, though, depending on the issue: there are a lot of now-forgotten but very cool comics between its 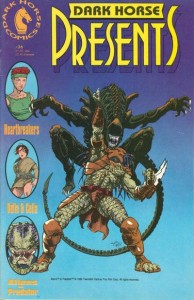 pages. For example, many early numbers have Paul Chadwick’s Concrete, a tale of a regular guy who becomes trapped in a bulky, rock-like alien body; they’re well-crafted, smart one-shot tales. Issues from #10-21 have Mark Badger’s Masque, which eventually became The Mask, and one of Dark Horse’s hottest characters. Later issues can yield a variety of buried treasure, especially because so many of the best indy creators from the ’80s and ’90s show up at some point in the series’s run: Eddy Campbell’s Bacchus is there, as is Mike Mignola’s Hellboy, Frank Miller’s Sin City, Art Adams’s Monkeyman 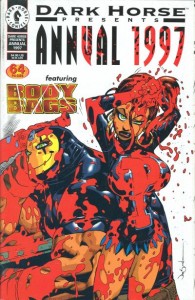 and O’Brien, Adam Warren’s Dirty Pair, John Byrne’s Next Men, and a host of others; on top of that, many of Dark Horse’s licensed properties — Aliens and Predators, especially, and later even Buffy the Vampire Slayer — put on appearances. There are occasional giant-size issues and annuals, too, and they’re also worth searching out — the ’97 annual has Jason Person’s Body Bags, a tale of a bounty hunter and his bloodthirsty, pint-sized daughter that’s a lot of nasty fun, while the ’99 annual has a Sergio Aragones Groo story, and the 2000 one has another Buffy TVS story. Dark Horse Comics 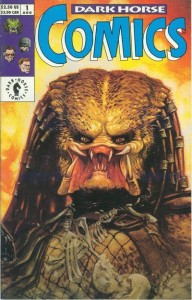 mines the licensed stuff even more: almost every issue has a couple of movie tie-ins, from the ubiquitous Aliens and Predators through Robocop, Time Cop, the Thing from Another World, James Bond and various Droids, Jedis and other Star Wars characters. With cover prices for DHP ranging from $1.75 to $2.50 (DHC is all at $2.50), there’s plenty of rewarding reading available to comics fans (and, while not all issues are available on the discount racks, they’re now stocked in the regular back-issue boxes, for the first time in about five years, and will stay there through AABC’s New Years’ Day sale, when they’ll be at a discount, too). 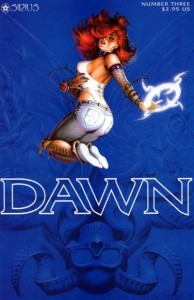 Joseph Michael Linsner’s triple-teardrop-tattooed title character has developed quite a cult following since her first appearance in 1989, thanks to his flair for pinup poses; I’ve never quite seen the attraction, myself, because while the pinups are undeniably sexy, his storytelling is too often stiffly posed and hard to follow (and, as for his writing… did I mention that his pinup art was good?). Anyway, the discount racks have many of the character’s eponymous 1995 6-issue series, as well as the Return of the Goddess mini-series that came a few years later; if you want to relive one of the better ’90s Good Girl Art comics, here it is. 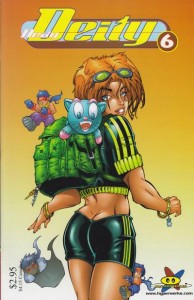 This is another ’90s girl book, published by Hyperwerks, one of the many companies that were trying to follow in Image’s then-still-fresh footsteps. It was hot for a bit, but has fallen considerably since then (it isn’t even listed in the Overstreet Price Guide, which is more an indictment of Overstreet’s carelessness than of the book’s quality); however, here it is, resurrected for your nostalgiac appreciation. 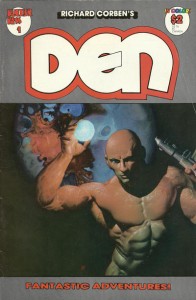 This is Richard Corben’s semi-underground, Heavy Metal character, published in 1988 in then-new adventures, in color. If you know Corben’s work only from his recent Hellboy stuff (or his Lovecraft adaptations for Marvel), then this is worth checking out: fairly standard sword-and-sorcery fantasy stuff, but elevated by Corben’s unique airbrushing technique, and his technical and anatomical virtuosity. Fans of Frank Frazetta-ish art and story should definitely check these out. 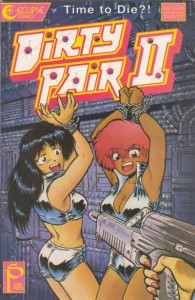 Adam Warren’s fun, sexy, technologically-savvy and very fast-moving sf/bounty hunter/anime book had six or seven mini-series from the late ’80s up to around 2000. If you know Warren’s work from his own Empowered, or from his various Marvel mini-series, or from his stint wrapping up the first Gen-13 series, then you’ll probably want these books; there are just enough of them on the discount racks to give a taste of how good they are, but there’s now a complete set out in the regular back-issue boxes, so check there to fill in any gaps: once you’ve read one or two of these, you’ll be hooked enough to want the rest. 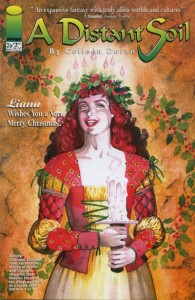 Colleen Doran’s long-running fantasy series has been through a number of incarnations and publishers; like Dave Sim and Wendy and Richard Pini, Doran was one of the earliest supporters of creator-owned comics, and her solidly-grounded, romantic adventure tales have created a decent following. Check a few of these out, and then look for her online to see most of her current work — she’sbeen a webcomics pioneer for the last ten years or so, too.

Writer Mark Evanier’s ’80s teen super-group is another good example of a creator-owned work. It’s straight-down-the-middle storytelling, with the same soap-opera subplots and alienation themes (the characters, “grown” and programmed through genetic engineering, are considered less than human by the rest of the population) that made the X-Men and the Teen Titans so successful in the same decade. It’s not at their level, of course, but it’s sturdily constructed, and worth a look for the $1 each that the books are going for today.

With 40 years of experience in comic reading, collecting and reviewing, English Professor Phil Mateer has an encyclopedic mind for comics. Feel free to ask Phil about storylines, characters, artists or for that matter, any comic book trivia. He will post your questions and answers on the AABC blog. His knowledge is unparalleled! He is also our warehouse manager, so if you are looking for that hard to find comic book, ask Phil!
View all posts by Phil →
This entry was posted in News & Promos, Reviews and tagged Adam Warren, Aliens, Colleen Doran, Concrete, Dark Horse Presents, Dawn, Deity, Den, Dirty Pair, Distant Soil, DNAgents, Linsner, Mask, Predator, Richard Corben. Bookmark the permalink.