It Came From the Back Room #16 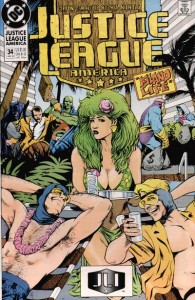 Standard recap: I’m slowly going through AABC’s one-million-plus back-issue room, restocking the boxes on the sales floor and pulling stuff to sell as discount/overstock/special items. I’m going through the alphabet backwards (don’t ask), and at my speed, this amounts to a two-year project. This week is brought to you by DC, who have the longest-running of all the “J” titles:

This series started in 1960 (after a three-issue tryout in DC’s anthology title, The Brave and the Bold). The idea — get all of the company’s big guns into one team-up book — had 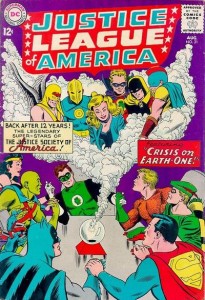 proven successful with All Star Comics, featuring the Justice Society of America,  in the 1940s, and the presence of the company’s Big Three characters — Superman, Batman and Wonder Woman — along with the then brand-new incarnations of Flash and Green Lantern, with Aquaman and the Martian Manhunter rounding out the roster, proved just as popular; this first volume of the book lasted an impressive 261 issues.

Naturally, we don’t have any discount offerings of, oh, the first 100 issues, although a good percentage are available as regular back issues. The most popular from this era are #s 21 and 22, in which DC reintroduced the Justice Society characters, including their “older” versions of 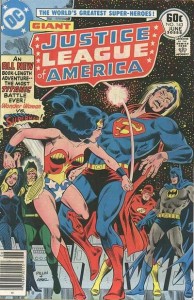 Superman, Green Lantern, Flash, Hawman, et.al., via the then-hardcore-sf use of parallel worlds (the infamous Earth-1 and Earth-2). Further two-issue teamups with the JSA became a yearly tradition, and are the high points of this period; scripter Gardner Fox and artist Mike Sekowsky, who handle creative chores on most of the first 63 issues, otherwise offer a steady and lighthearted, if often predictable, take on the characters. Issue #64 sees the arrival of artist Dick Dillin, who begins a decade-long run on the title that establishes him as the JLA artist of the late Silver and Bronze ages; his ability to draw dozens of heroes and villains effectively, with a low-key but smooth and attractive style, is reminiscent of the JLA’s current artist, Mark Bagley. After Fox leaves, with issue #66, Denny O’Neil takes over for a few years; he’s replaced by Mike Friedrich, who’s followed by Len 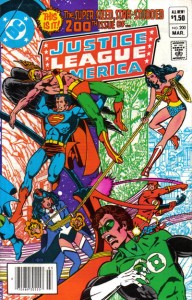 Wein, who’s followed by a grab-bag of writers, including Cary Bates, Elliot S! Maggin, Martin Pasko and Gerry Conway (all the while, Dillin provides a comforting continuity with his art). With issue #139, ex-Marvel writer Steve Englehart comes aboard, and crafts probably the best Bronze-Age JLA run for the next year, through issue #150. That’s followed by a long Gerry Conway stint, all the way through #216 (which ties him with Fox for the longest run as JLA scripter). Partway through Conway’s tenure, Dillin departs with issue #183, leaving a 120-issue legacy as artist; he’s followed in the next few years by a number of others, some good (George Perez) and some… not so good (Don Heck, Rich Buckler, Alan Kupperberg, Chuck Patton… a depressingly long list of medocrity). Conway comes back on board with issue #128, and a few issues later ushers in the most infamous period of JLA history: Justice League Detroit. 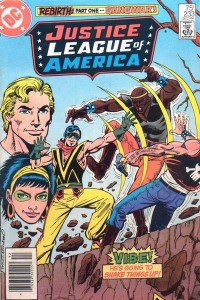 The theory here was that the book, faced with declining sales (see that list of less-than-stellar artists from earlier), needed a shakeup; however, DC editorial, instead of finding better artists, decided to create a multicultural bunch of new heroes (Vibe, the Hispanic homeboy break-dancer, being the most egregious), and build the team’s roster around them, while getting rid of the big guns like Superman, Batman, etc.; also, instead of being headquartered in a cool orbiting satellite or on the moon, or even in a cave, they decided to base them in… Detroit. Why this seemed like a good idea is lost to the mists of comic history — especially given that, less than three years later, they not only ended the comic but also killed off most of the new characters. The good news is that the demise of the Detroit team, and the title, set up the next

This second incarnation of the JLA debuted in 1987, and although its title was tweaked quite a bit — to Justice League International with #7, and to Justice League America (without the “of”) with #26 — it managed close to a ten-year run, totaling 113 issues, and ended in 1996. Written by J.M. DeMatteis and Keith Giffen, it’s best known as the “Bwah-ha-ha” league, because it managed to integrate a considerable amount of light-hearted humor with the usual superhero drama; it’s also known for introducing 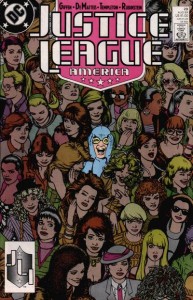 Max Lord (then a good guy) as the behind-the-scenes organizer of the League, and for pairing up Blue Beetle and Booster Gold as a kind of spandex Laurel and Hardy duo, forever involved in fratboy pranks and doomed get-rich-quick schemes. All of this is aided considerably by the art of Kevin Maguire, whose sleek, sexy style (he’s better at drawing sophisticated women than anyone this side of Frank Cho: look at that cover to issue #29 just to your left) makes the book look both modern and fun. Maguire leaves by issue #23, but Adam Hughes, himself no slouch at rendering the female figure, takes over the art chores with issue #31, and, minus a few fill-ins, sticks around until #45 (and does #51 too). Giffen and DeMatteis leave with issue #60 — a more-than-respectable five-year run — and then the book enters a long, slow 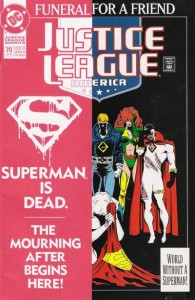 decline, broken by a few interesting spots (the death-of-Superman tie-ins with issues #69 and 70; a pretty-good Doctor Destiny story in issues #72-75), and not much else. Again, though, there’s good news:  as with the end of volume one, the death of volume two paved the way for a rebirth of the series, this time leading to one of its all-time best periods. But that’s a story for our next installment….

With 40 years of experience in comic reading, collecting and reviewing, English Professor Phil Mateer has an encyclopedic mind for comics. Feel free to ask Phil about storylines, characters, artists or for that matter, any comic book trivia. He will post your questions and answers on the AABC blog. His knowledge is unparalleled! He is also our warehouse manager, so if you are looking for that hard to find comic book, ask Phil!
View all posts by Phil →
This entry was posted in Comics History, DC, Reviews and tagged Adam Hughes, DeMatteis, Denny O'Neil, Dick Dillin, Gardner Fox, Gerry Conway, Justice League, Justice Society, keith Giffen, Kevin Maguire, Mike Sekowsky, Steve Englehart. Bookmark the permalink.