It Came From the Back Room #15 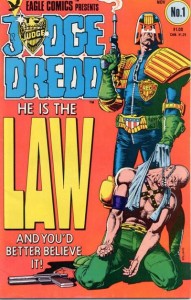 Standard recap: I’m slowly going through AABC’s one-million-plus back-issue room, restocking the boxes on the sales floor and pulling stuff to sell as discount/overstock/special items. I’m going through the alphabet backwards (don’t ask), and at my speed, this amounts to a two-year project. This week is brought to you by the letter “J”:

Joe Dredd, of Mega-City One, is a futuristic cop and a product of 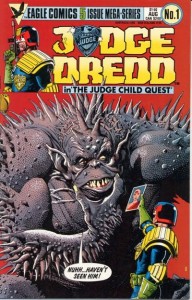 Great Britain, having first appeared in the British sf magazine 2000 A.D. in the late ’70s. Imagine a police force made up entirely of Clint Eastwood Dirty Harrys, all with the authority to capture, try and even execute criminals, and with theories on criminology and police procedure that make the Tea Party look like Michael Moore; then, imagine the toughest of the lot: that’s Judge Dredd. Part hard-nosed adventure, part tongue-in-cheek social parody, and part over-the-top violence, the comic has kept its popularity in England for over 30 years. In the mid-’80s, the British publishers Eagle Comics (and, later, Fleetway), began reprinting Dredd’s adventures in the 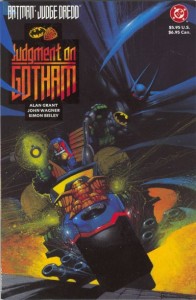 American market, which was then undergoing an explosion of indy publishers like First, Eclipse, Comico, etc. They were smart enough to start with the best material, instead of the earliest, which meant that early issues featured scripts by Dredd creator John Wagner and artist Brian Bolland; those proved popular enough that the comic lasted, in various incarnations, for over ten years (it even spawned a movie in 1995, starring Sly Stallone, but the less said about that — and the DC version of the comic that launched about the same time — the better). 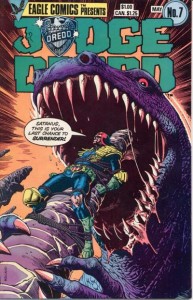 the beginning, the mythology and mordant tone are more consistent than with most series. Fellow Brit Alan Grant did a number of scripts in the ’80s, and in the ’90s various then-fledgling writers from the British Isles, including Garth Ennis and Grant Morrison, took their turns too. Check the credits in each issue carefully: some of the artists are obscure, but then there’s Bolland, and Simon Bisley (whose 1991 Batman/Dredd crossover, Judgment on Gotham, should be owned by every comics fan), and Carlos Ezquerra (who co-created the character with Wagner), and other surprises too. The British sensibilities of the creators and characters can sometimes seem a little… off to American readers, but that’s part of the charm. 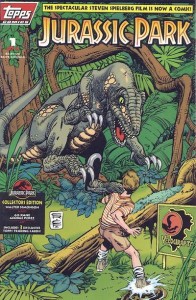 This is worth noting because we’ve got most of the first mini-series — the one that adapts the movie, with (a) a script by Walt Simonson, (b) pencils by Gil Kane, (c) inks by George Perez, and (d) free trading cards bagged with it — available at the original cover price. That’s an all-star creative team, especially on a dinosaur book, no? A couple of the later series, like Raptors Attack and Raptors Hijack, are also available; the art isn’t stellar, but the scripts are by Steve Englehart, and fans of his Batman, Avengers, Dr. Strange and other comics should give them a look. 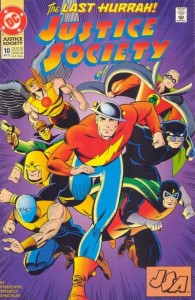 During the super-hero revival of the ’60s, DC brought them back through their “Earth 1/Earth 2” artifice, and then when the 1980s Crisis on Infinite Earths combined all the Earths into one, the new paradigm was that there had never been earlier versions of Batman, Superman or Wonder Woman, but that the earliest “mystery men” had consisted of the older versions of Green Lantern, the Flash and Hawkman, along with Wildcat, Dr. Midnite, the Sandman, Black Canary, Starman, the Atom, Hourman, Mr. Terrific, and the semi-comic-relief Johnny Thunder. The first appearance of a comic actually titled Justice Society of America was an eight-issue mini-series in 1991; it wasn’t particularly distinguished, except that two of its issues (#s 3 and 5) were drawn by Mike Parobeck, in his then-unique, ultra-clean, “cartoony” 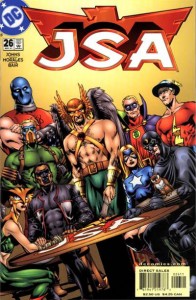 throwback style. These apparently caused enough buzz to launch a full-scale Justice Society series in 1992, with Parobeck on the art; sadly, they didn’t sell all that well, and the comic only lasted ten issues.

The next attempt, another full series entitled JSA, wasn’t until 1999, but this one stuck: it managed 87 issues, switched its title to Justice Society of America and rebooted, and is still going strong today.  Much of that is because of its guiding writer, Geoff Johns — Johns co-wrote the first 50 issues of JSA with David Goyer (except for a couple where he was the sole scripter), and then soloed through most of the rest of the run, up through issue #78, with a coda on #81 (Paul Levitz, no slouch on group books himself, scripted issues #82-87), and then wrote the first 26 issues 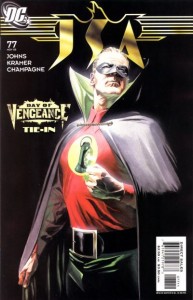 of the current volume. Johns had already proven his chops with a well-regarded ’90s run on The Flash, but group books are a lot trickier than solo characters; the juggling act required to balance a dozen or more characters, advancing the storylines of each while keeping the plot pot boiling and stirring interesting villains into the mix, can be daunting. The title’s survival proves his success: The JSA under Johns wasn’t one of those books that showed up on anybody’s top-five lists (although the first volume’s “Return of Hawkman” arc, from issues #23-25, got a lot of buzz), but it was always dependably entertaining, with enough character development, surprising plot twists, new faces and cliffhangers to keep readers coming back for their monthly fix. That’s harder 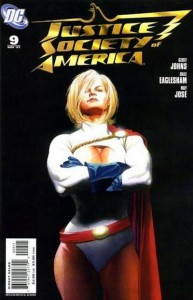 than it looks: after Johns left, Bill Willingham, of Fables and Elementals fame, took over as scripter for a year, and offered some good work (he’s a master of super-powered and magical strategies and tactics, so his plots and fight scenes are intricate delights), but couldn’t attract readers; sales dropped significantly, and the book is currently trying to regain its mojo under different scripters.

What’s available at the store? All the issues of both mini-series and the two ongoing volumes are out in the regular back-issue boxes, and the discount rack has a long-box or two worth of cheap overstock: scattered issues from the first 50 or 60 issues of the first volume, and more from the latter end of the run and the second volume, plus assorted mini-series and spinoff titles, like JSA All-Stars. Look particularly for the books with Alex Ross covers — he’s done quite a few, and they’re solid examples of his photo-realistic style; especially noteworthy are his series of solo-character covers, running from issues #73-80 of the first volume, through #s 2-10 of the second (issues 1 and 11 of the second volume are also Ross covers, but are group shots). Those solo covers all have deep black backgrounds and similar trade dress, and all 17 lined up on a wall create a striking effect.

With 40 years of experience in comic reading, collecting and reviewing, English Professor Phil Mateer has an encyclopedic mind for comics. Feel free to ask Phil about storylines, characters, artists or for that matter, any comic book trivia. He will post your questions and answers on the AABC blog. His knowledge is unparalleled! He is also our warehouse manager, so if you are looking for that hard to find comic book, ask Phil!
View all posts by Phil →
This entry was posted in Comics History, News & Promos, Reviews and tagged Bill Willingham, Brian Bolland, Geoff Johns, George Perez, Gil Kane, John Wagner, JSA, Judge Dredd, Jurassic Park, Justice Society, Mike Parobeck, Simon Bisley, Steve Englehart, Walt Simonson. Bookmark the permalink.