Standard recap: I’m slowly going through AABC’s one-million-plus back-issue room, restocking the boxes on the sales floor and pulling stuff to sell as discount/overstock/special items. I’m going through the alphabet backwards (don’t ask), and at my speed (especially with the school year now in full gear), this amounts to a two-year project. I’ve currently started on the Marvel and DC “M” stuff.  Here are some of the titles I’ve been encountering: 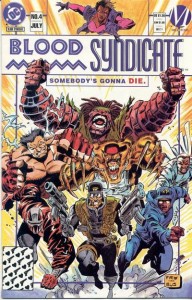 Milestone was an early-’90s attempt to increase diversity in superhero comics, both among their characters and their creators. Its four founders — Dwayne McDuffie, Denys Cowan, Michael Davis and Derek Dingle (with a special “Pete Best,” fifth-Beatle appearance by Christopher Priest, who was in on the early planning but left before any comics came out), were all African-American writers or artists who had gotten together, created the early outlines of the Milestone Universe, and then approached DC about partnering with them to publish the books as a separate, creator-owned imprint (much like the Wildstorm books later).

It’s often said today that the Milestone books failed because white fans and retailers thought they were “too black,” and that DC didn’t support them enough, but that’s, at best,  a simplistic argument. For one thing, the books’ goal of diversity meant that the characters weren’t all “black”; there were a lot of characters who were also Hispanic, Asian, female and, yes, white, and anyone who picked up an issue could see that.  For another, the imprint had a five-year run, with three of the four main books publishing over 40 issues; considering the large number of comics universes competing for consumer interest between 1992 and 1997, that’s a pretty good number for a “failure.” Too, DC did market the books: the Worlds Collide crossover, about a year and a half into Milestone’s existence, offered a 14-part crossover between many of the Milestone books and the Superboy, Man of Steel and Steel titles (OK, those were the three lowest-selling of the Superman Family titles, but still…).

Finally, some retailers supported the imprint; All About Books and Comics, for one. That’s why we’re discussing it: because we have extra copies of most of the first two years of the imprint, right up to (and including) the Worlds Collide stuff; we were ordering quite a few of most Milestone titles back then, because we thought they were well-written and well-drawn, and would eventually find an audience.  The crossover failed to goose sales in the titles, however, and at that point we started to drop new orders; we were ending up with too many Milestone books just sitting on the stands, unsold. Most other retailers apparently did the same thing, because the next two or three years were a slow decline culminating in the end of the line. This means, by the way, that the last ten or twelve issues of each of the main Milestone books — Static, Blood Syndicate, Icon and Hardware — are legitimately hard to find; we’re missing any copies of a lot of them, let alone having too many of them. Mark my words: they’ll end up being just as collectible as those last few Valiant issues are; they’re almost as rare, and often offer considerably better stories. Anyway, about those earlier copies of the titles that we do have…: 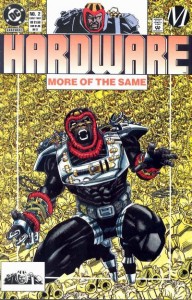 Hardware is an Iron Man riff, in which tech genius Curtis Metcalf is working for a big-time industrialist, Edwin Alva, who’s been making a lot of money off of Curtis’s inventions, but treating him like a peon. Alva’s also involved in a lot of shady dealings, so Curtis dons his armored suit at night, and tries to bring him down as, yes, Hardware.  The early issues are written by Dwayne McDuffie, pencilled by Denys Cowan and inked by Jimmy Palmiotti, so they’re all decent reads — in fact, the rule for all Milestone titles is that if McDuffie’s the writer, they’re worth it.  Cowan is one of those artists whose ability increases with his enthusiasm, and he’s very enthusiastic for the first seven issues of this title. Then he leaves, to show up sporadically later (he’s in #13, for example, and #16-18, sandwiched between issues by a young Humberto Ramos), but then he’s mostly gone, and by issue #20 McDuffie’s gone, too, and that’s pretty much the end of the good stuff.

This is the second Milestone title published, and it’s mostly not written by McDuffie (he co-writes the first few issues with Ivan Velez Jr., and then Velez Jr. solos from issue #5 on). It’s about a street gang who end up with super-powers, sort of, but it’s more about family, loyalty, and kicking the crap out of anyone who gets in your way; it’s very hard-nosed in its view of the world, but then that befits its subject matter. The title was blessed with some nice artists: Trevor Von Eedon in the first issue, and Chriscross in #3 and most of the early issues from #5 up (but check out #s 9 and 15, with very early J. H. Williams III art, and #18, with Humberto Ramos).

Icon’s the third title published, and arguably the best: it’s a Superman take, where the alien child’s spacecraft was programmed to genetically alter him to match whatever humanoid lifeform it first encountered — and it landed in a cotton field in the antebellum South, and was discovered by a slave. The alien thus looks like a normal human, black, but has Superman-level powers; when the comic opens he’s  living quietly in the present, a lawyer, very intelligent but something of a stuffed shirt. Then, his house is broken into by a couple of kids, and he reveals his powers while chasing them away. One of the kids, Raquel Ervin, calls him on the way that he’s not contributing to society, despite his vast abilities, and talks him into taking on the superhero identity of Icon. He gives her a high-tech “inertia belt” that acts as a force field and lets her punch stuff real hard, and she becomes his sidekick, Rocket.

This all goes down very smoothly, with loads of sly social commentary (when Icon first shows up to held during a hostage crisis, the cops see a black guy in a mask and immediately assume the worst, and attempt to club and shoot him), and an affecting relationship between the idealistic Icon, who always assumes the best in people and tries to reason with them, and the street-savvy and whip-smart Rocket, who has her own idealism but tempers it with a knowing cycicism about the ways she’s seen the world work.

McDuffie and regular artist M. D. Bright pour their hearts into the first two yearsor so of the book (although there are fill-in scripters in #s 11 and 12 — in #11, a young Kurt Busiek).  If you see a copy, grab #13, where McDuffie and Bright do a mocking but semi-affectionate parody of Marvel’s 1970s version of Luke Cage (“Buck Wilde, Mercenary Man”) that comes off like some kind of fevered blaxploitation pic.

This fourth Milestone book is the reason I said that Icon is “arguably” the best, because it makes a good case for itself, too. It definitely has the most well-known character, since teenage geek/gamer Virgil Hawkins and his electric alter ego had a long second life as the popular TV cartoon Static Shock. However, like Blood Syndicate, McDuffie only co-writes the first few issues (with Robert L. Washington III, who then solos as writer except for another Kurt Busiek fill-in (in #12) and the Worlds Collide episode in #14, written by McDuffie). Art in the first ten issues or so is by John Paul Leon, with Wilfred Santiago mostly doing the honors after that. Both are decent enough, but the real attraction here is the early-Spider-Man vibe, as 15-year-old Virgil has the typical smart-kid high-school problems, but then gets to put on the costume, kick ass and throw both lightning bolts and mocking pop-cultural references at his befuddled bad-guy opponents. The “electromagnetic powers” bit is flexible enough to allow for a variety of cool powers and visual effects; you can see why the cartoon worked so well. Out of all the Milestone characters, Static is currently the most visible (… um, the only one visible?), having spent the last year or two as a member of the Teen Titans — although he’s currently out of the picture, and supposedly going to appear in his own series again. 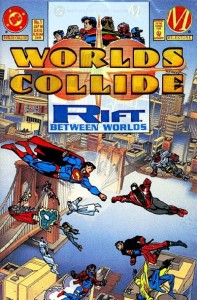 There are other Milestone titles available — Xombi, writer John Rozum’s high-tech supernatural/occult mashup, is probably the best, although Shadow Cabinet has its moments. Probably the coolest artifact is the Worlds Collide one-shot, which offers one of those ’90s DC build-your-own-cover deals, with a glossy background and tons of vinyl character punch-outs of the Milestone and DC heroes to stick on it and play with. On sale cheap, and worth every penny just to let your inner 8-year-old rip open the bag, punch those suckers out and pose them to your heart’s content.

With 40 years of experience in comic reading, collecting and reviewing, English Professor Phil Mateer has an encyclopedic mind for comics. Feel free to ask Phil about storylines, characters, artists or for that matter, any comic book trivia. He will post your questions and answers on the AABC blog. His knowledge is unparalleled! He is also our warehouse manager, so if you are looking for that hard to find comic book, ask Phil!
View all posts by Phil →
This entry was posted in DC, Reviews and tagged Blood Syndicate, Chriscross, Cowan, DC, Hardware, Icon, J.H. Williams III, John Paul Leon, M.d. Bright, McDuffie, Milestone, Ramos, Static, Static Shock, Velez, Worlds Collide. Bookmark the permalink.