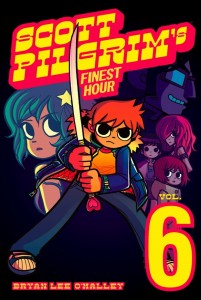 Yes, it’s a satisfying conclusion, and a cultural phenomenon, and about to be a movie — but don’t read this volume if you’ve never heard of it until now: it’s the sixth and last book of a series. Go get Scott Pilgrim #1, start there, and work up to the end. That way, you’ll get to see O’Malley develop over the six years it took to create this story (there’s a noticeable leap in storytelling ability with each of the first five books), and you’ll get to know and care for the characters, and understand the various manga/Canadian rhythms and videogame tropes that he throws in so confidently and effortlessly. That individual style was a problem for me at first — I tried to read book #1 a few years ago, got halfway through, and stalled out — but later I got through it, started book #2, and halfway through there was an sudden little “click” in my head as I got it; then, by book #3, I was obsessed with the story, in the way that the best stories (Harry Potter, Lost) grab you and make you care about what happens next. It’s a rare indy comic that’s able to pull that off, but it’s a great feeling for a reader when it happens, and you all owe it to yourselves to try this one, and see if it does it for you. 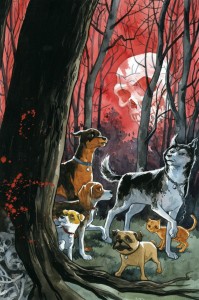 I covered this last year, when it was a four-issue mini-series, but this collected edition adds the four previous stories with the characters (published in scattered anthologies over the years), plus some sketches, covers and other editorial material — and, for a solid, well-produced hardcover for just a shade under $20, it’s an incredible bargain. Plus, Friday night the mini collected two Eisner awards at the San Diego Comic Con — add those to what the earlier stories had already gathered, and that’s a four-Eisner book. Yes, the set-up — suburban dogs and cats battle supernatural threats — sounds sketchy, but make no mistake: this is a sophisticated horror book, with characters you care about and stories that trust the readers’ intelligence. It’s also unusual in that it’s a series that even people who aren’t comics readers seem to latch onto effortlessly, so for a non-fan spouse, significant other, teenager, friend, etc., it’s a perfect gift; they won’t want your Blackest Night or Siege collections, with all the explanation and inside knowledge required, but this self-contained, charming and suspenseful set of tales will be just right.

Moore in Lovecraftian-tribute mode, as a group of FBI agents investigates the events of his earlier The Courtyard. Mostly set-up and hints of coming doom, but the contrast between the hard-assed, ultra-practical agents and the terrible things they’re investigating is effective, and the last sequence in the book is subtle but very creepy. Moore has said recently that he won’t be writing any more comics; maybe yes and maybe no, but if so this is worth a look as a reminder of what we’ll be missing. He wrote the script quite a while ago (right after he left DC), and he’s on record as saying it’s a reflection of his mood at that time, and “very dark,”; this first issue only hints at that, so later issues should be interesting — especially since Burrows, who’s worked so much with Garth Ennis, has a lot of experience with drawing “dark.” 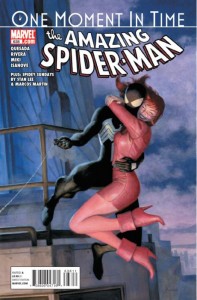 Starting a four-part explanation of just what happened during Peter and Mary Jane’s wedding day to cancel it and break them up; it alternates new material with pages from the original wedding story in Amazing Spider-Man Annual #21, and even reveals what MJ said to Mephisto right before the end of One More Day. Not nearly as stupid as you might expect (in critical circles, this is called “damning with faint praise”); Rivera’s an effective choice for the art, and, since Marvel editorial is showing no signs of ever reverting back to the “married” thing, it’s as close to closure as older fans are going to get.

Bad planning to release these the same week, since they’re basically two stories of the same comic. Sure, New has Luke, Jessica and the Thing, while Adjectiveless has Thor, Iron Man and Captain America, but both have Wolverine and Spider-Man. New has demons possessing characters and going for the Eye of Agamotto, so Dr. Strange, Damian Hellstorm and Brother Voodoo are involved, whereas Adjectiveless features a time-upheaved Apocalypse and his Horsemen (in either a deliberate bait-and-switch or an incompetent-scheduling move, the cover spotlights Kang and the future Hulk, neither of which are actually in this issue), but both are multiple-part, many-character stories. New has a cool double-page opening splash, but Adjectiveless has Romita Jr. and Janson; both have Bendis’s patented rolling fight scenes and snarky dialogue, and both have different chapters of the amusing “Oral History of the Avengers” as back-up features. If you’re buying Marvel superhero books, it’s hard to pass up either one.

Levitz shows off his skills at keeping three plots going simultaneously; the A-plot, about Earth-Man and a Green Lantern ring, gets resolved, as does the B-plot, about Saturn Queen mind-warping various Legionnaires; the C-plot is about Saturn Girl and Lightning Lad looking for their kids, and presumably will be featured next issue. If you know who all of these people are, then you’re a Legion fan, and should be buying this book, since it’s currently in very good hands.

Ennis manages to work in a war story into all of his ongoing series — Preacher had a Vietnam flashback, as did Punisher, and even The Boys had some reference to WWII — but in this series, he’s been doing the pure stuff, in stories of three issues apiece.

With 40 years of experience in comic reading, collecting and reviewing, English Professor Phil Mateer has an encyclopedic mind for comics. Feel free to ask Phil about storylines, characters, artists or for that matter, any comic book trivia. He will post your questions and answers on the AABC blog. His knowledge is unparalleled! He is also our warehouse manager, so if you are looking for that hard to find comic book, ask Phil!
View all posts by Phil →
This entry was posted in New Comics, Reviews and tagged Alan Moore, Amazing Spider-man, Avengers, Battlefields, Beasts of Burden, Bendis, Bryan Lee O'Malley, Ennis, Evan Dorkin, Janson, Jill Thompson, Legion os Super-Heroes, Levitz, Neonomicon, Romita, Scott Pilgrim. Bookmark the permalink.