It Came From the Back Room #1

So, as Dan mentioned last week, we’re changing up some of the columns here at AABC.  Mostly, the whole “Stuff I Read and Put Back” deal was, after three years, getting old — too many mediocre comics, without much to say about them. Better to have one set of “new” reviews each week, and concentrate on the good stuff, while saving the mockery for just the two or three books bad enough to deserve it.

That only accounts for one column a week, though. What to do for another? Well, as most of you know, my function at the store is to take care of the back room.  Because we have, literally, a million comics back there, this is a two-year job: I start at “Z,” work backward through the alphabet in three simultaneous groups — Marvel, DC, and Indy —  and, when I get to “A,” two years later, start all over again.  I  integrate newer stuff into the backroom  collection, restock the boxes on the main floor, and make space by getting rid of overstock. That creates opportunities for you, our customers, since it brings seldom-seen comics out into the main boxes, and generates a lot of discount bargains, too. Hence, “It Came From the Back Room”: once a week (or two), I’ll report on what I’ve been working on, and the best of those buried backstock comics that are now newly available.

This week, for example, I’ve just started on the letter “N,” and begun with the Indy books. Thus : 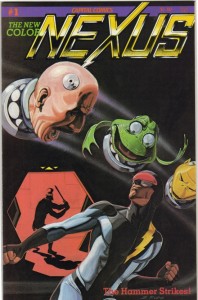 Nexus is probably the star of the batch — it’s rollicking space opera overlaid with philosophical debate and political satire. Its hero, Horatio, grew up practically alone on the planet Ylum, and has been tasked by that planet’s resident nigh-omnipotent being, the Merk, with tracking down mass murderers and executing them. The good news is that he gets a cool costume and energy powers; the bad is that, until the murderers are dispatched, Horatio is tormented with nightmares where he relives their victims’ agonizing deaths. Mike Baron and Steve Rude, the writer/artist/co-creators, start out strong and get better and better. Rude’s meticulous art causes him to miss issues, though, and require substitute artists, some interesting (Paul Smith, Adam Hughes, Keith Giffen), and some… not so much; the last twenty or so issues of the original run suffer the most from this. However, after the monthly series ended with #80, Baron and Rude did a number of mini-series (Alien Justice, Executioner’s Song, Nightmare in Blue, etc.), and these, which provide the creators more lead time and higher production values, offer some of the best stories of all. 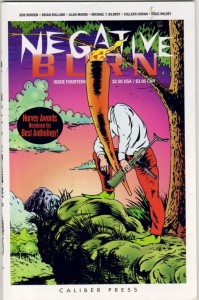 Negative Burn was an anthology series from Caliber, and offered an outlet for anumber of cool creators during the ’90s; it lasted over 50 issues, and it’s a good idea to check the table of contents for each issue, where people like Brian Bolland, Paul Pope, Neil Gaiman, Alan Moore and many others (like Bob Burden, whose Flaming Carrot cover and short inside story grace #14, pictured above) offer seldom-seen work.

Next Men was John Byrne’s independent book from the early ’90s, where he has

full creative reign as both artist and writer, and if you’re a fan of his clean, classic style from his work for Marvel or DC, it’s definitely worth a look. There are 30 issues, and most can be had for the original $2.50 cover price or less; the exception is #21, which offers the first regular comic appearance of Hellboy (and has his ten inside pages, and the cover, drawn by Mike Mignola). We actually had three copies of this buried in the back — a VF for $30, a VF/NM for $40, and a NM copy for $50 — so if you’re a serious and well-financed fan of the character, ask about them. 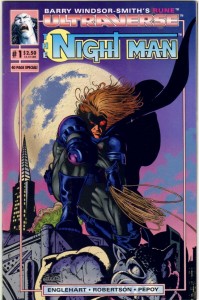 Finally, Night Man is another early-’90s entry, about a jazz musician who can “hear evil,” and puts on a costume to combat it. It’s notable because of its creator and writer: Steve Englehart, whose ’70s-’80s work on titles like Captain America, Dr. Strange, JLA and Batman is still highly regarded today. Add some early work by decent artists — Darick Robertson for #1, and Kyle Hotz for issues #2-10, for example — and the fact that the character was, briefly, a late-night TV series, and that’s more than enough reason to try a few issues.

And… that’s it for this week. Look for overstock copies of the books mentioned here in a couple of the long boxes in the “cover price” section near the front of the store, and for regularly-priced copies in the back issue boxes — and, if you don’t see a particular issue number, ask! Then, tune in in two weeks (or so), to see what else we’ll find in the letter “N”: Ninja High School? Nova? Nightwing? New Warriors…?

With 40 years of experience in comic reading, collecting and reviewing, English Professor Phil Mateer has an encyclopedic mind for comics. Feel free to ask Phil about storylines, characters, artists or for that matter, any comic book trivia. He will post your questions and answers on the AABC blog. His knowledge is unparalleled! He is also our warehouse manager, so if you are looking for that hard to find comic book, ask Phil!
View all posts by Phil →
This entry was posted in Comics History, News and Events, Reviews and tagged Cover Price, Discount Comics, Negative Burn, NextMen, Nexus, Night Man. Bookmark the permalink.