It Came From the Back Room #8 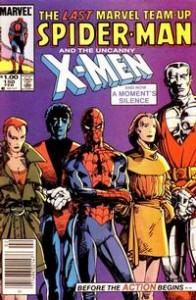 This is Marvel’s ’70s/’80s Thing team-up book, which lasted exactly 100 issues. Like all such books , it’s mostly done-in-one stories, and the pattern (Thing and guest-star meet, socialize and/or fight, 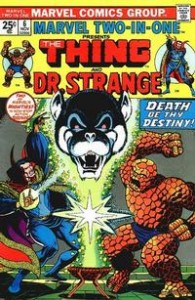 then team up to stop some bad guy) can get old, but even at its worst it’s passable light entertainment, a showcase of Marvel house style of 30 years ago, and a gold mine of obscure characters (the Thing and… The Living Mummy! The Scarecrow! Modred! Blue Diamond! Brother Voodoo!). The first nine issues have scripts by Steve Gerber, mostly with Sal Buscema on the art (although Gil Kane, George Tuska and Herb Trimpe show up too), so they’re worth checking out. I actually put some of those out at $1 each, because they’re from the Marvel Value Stamp era and have the stamps cut out — but that doesn’t affect the stories, and it’s a good way to get ’em cheap. After Gerber, it’s mostly generic super-stuff, with a few bright spots: Gil Kane art in #s 11, 14 and

28; an early Spider-Woman (Jessica Drew) story in #s 30-33; John Byrne art in #s 43, 50, and 53-55 (with #50 being a classic story where Ben goes back in time to talk to the earlier, more leathery and Grimmer (heh) version of himself, and cures him, only to find that time travel isn’t all that easy). Issue #51 has Frank Miller pencils, and #s 53-58 are an involved Project Pegasus story that starts out with Byrne art, and ends with George Perez in #s 56-58 (Perez also has art duty on #s 60, 64 and 65). Then, there’s issue #86, a quiet, offbeat little tale featuring Ben and Flint “Sandman” Marko having a drink in a bar, wherein Marko kinda decides to become a good guy — a transformation that actually stuck for a decade or two, until Marvel decided to retcon it because… well, evil is 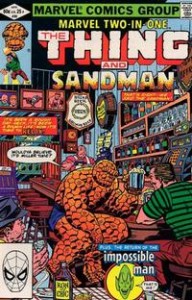 evil, and in comics no one can ever change? Kind of a downbeat lesson for kids, that…. and that’s about it for the good stuff, too — except for Annual #2, which features Jim Starlin’s conclusion to his classic ’70s Thanos/Captain Marvel/Warlock continuity (and, no, there aren’t any of those in the discount bins). Surprisingly (well, I was surprised), we didn’t have a ton of any single MTIO, but what we had is now out at $1 each, so get ’em while you can (I said this about all those Marvel horror books I put out a few weeks ago, and you know what? They’re pretty much all gone. Let that be a lesson to you procrastinators…). 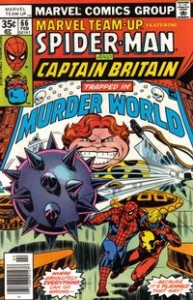 This was more successful than MTIO, with 50% more issues in its first incarnation (it made it to #150), and a few relaunches since — but then, it started earlier, in 1972, and you’d expect Spider-Man teamups to generate more interest than Thing ones. Like MTIO, it’s mostly by-the-numbers superhero storytelling, with Marvel mainstay writers like Gerry Conway, Len Wein and Bill Mantlo providing the scripts, and Spideycentric artists like Ross Andru, Jim Mooney, Gil Kane and Sal Buscema on art. Pretty good for what it is, and things perk up considerably with issue #59, when the young Chris Claremont and John Byrne, fresh off a 15-issue run on Iron Fist and a few short months away from their first X-Men collaboration, start providing stories. As in X-Men,  there’s a seamless meld of smart characterization, hi-concept plots, and crystal-clear, enthusiastic storytelling; you can tell that these two guys are 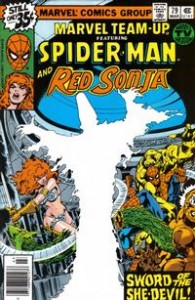 having enormous fun discovering all the cool toys available in Marvel’s sandbox. The run encompasses issues #59-70, 75 and 79, and is the MTU high point. After that? Well, there’s the cast of Saturday Night Live guest-starring in #74, a decent Claremont-penned Black Widow saga in #s 82-85, the first Mockingbird in #95, the first Karma in #100 (with Frank Miller art, and Byrne drawing a 10-page backup story featuring the first meeting of the Black Panther and Storm), and… well, then a whole bunch of generic team-up stories. As with MTIO, they offer a decent snapshot of early-’80s Marvel, and if you’re looking for stories featuring obscure characters like Paladin, Devil-Slayer, the Gargoyle, Dominic Fortune, Frog-Man, etc., here they are, each getting their moment in the sun, complete with cover logo and reflected Spider-glory. We have a lot more of these out than the Two-In-Ones, too, and at a buck each, it’s hard to go wrong.