It Came From the Back Room #43 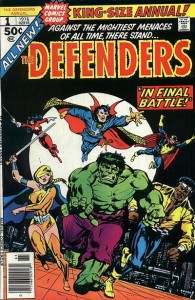 Standard recap: I’m slowly going through AABC’s one-million-plus back-issue room, restocking the boxes on the sales floor and pulling stuff to sell as discount/overstock/special items (these are featured at the discount racks at the west end of the store for a couple of weeks after each post, and then go to the discount racks on the east end of the store for a few weeks, and then disappear into our warehouses, so get them while you can). I’m going through the alphabet backwards (don’t ask), and at my speed (especially with the school semester in full gear), this amounts to a two-and-a-half-year project.  This week, we’re still featuring the letter”D”: specifically, Marvel’s non-team superhero team: 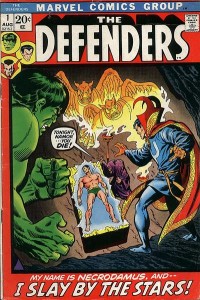 The original Defenders first get together in Marvel Feature #1-3, as Dr. Strange mystically ropes in the Hulk and the Sub-Mariner to help him deal with an occult threat to Earth. Part of the original hook of the series is that this isn’t the Avengers – the “members” don’t hang out together, and don’t have a clubhouse or mansion (although Dr. Strange’s townhouse is often the center of activity) — they get together to do a job, and that’s it, a relationship that makes sense with crabby loners like Namor and the Hulk. Defenders #1, from August, 1972,  features a creative team that will remain for the book’s first year: Steve Englehart as scripter, and Sal Buscema as 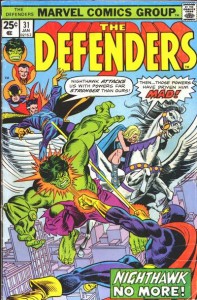 artist. They begin with the core three heroes, and a dependable pattern: mystic menace requiring a lot of muscle, provided by Namor and the Hulk, that helps to showcase Buscema’s straight-ahead, high-energy ability to draw heroes and villains punching the crap out of each other. Englehart quickly establishes a set of supporting characters, as the Silver Surfer starts hanging out in issue #2, the “new” Valkyrie appears in issue #3, and Hawkeye shows up in issue #7. This culminates in an Avengers/Defenders crossover battle in issues #8-11 of this title, and #116-119 of The Avengers; it’s fondly remembered because it’s consistently well-done (it helps enormously that Englehart is writing both books at the time) and for Defenders #10, which features a Hulk/Thor 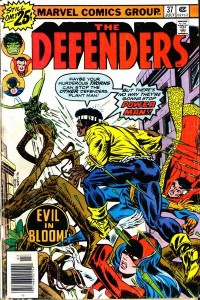 fight that takes up half the issue.

Englehart leaves the book after issue #11, although Buscema will stay for another 30 issues; Len Wein takes over as scripter from issues #12-18, and keeps the pot bubbling nicely — he introduces Nighthawk to the team in issue #13, guest-stars Professor X and the Brotherhood of Evil Mutants in #s 15 and 16, and manages appearances by Luke Cage and the Wrwecking Crew in the last few issues. However, it’s issue #20 that begins the Defenders’ Golden Age, because that’s when new writer Steve Gerber arrives; he and Buscema will stay on the book through issue #41, and mold it into one of the best super-hero series of the ’70s along the way. 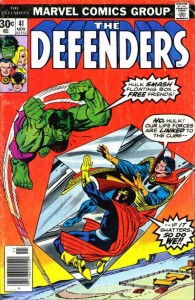 The buildup starts slowly, but Gerber starts deepening the characterization and themes, first with a longish Sons of the Serpent serial, and then with a Guardians of the Galaxy tale. The real fun starts in issue #31, though, as C-list villains The Headmen kidnap Nighthawk and remove his brain (the better to put one of their own brains in his skull). The next ten issues feature dozens of bad and good guys, an orphaned deer rescued by the Hulk (“Men killed Bambi’s mother!”), a satire of ’70s self-help movements, a Firesign Theater riff (issue #34, “I Think We’re All Bozos in This Book!”), takes on both women-in-prison and James Bond movies, and much more. It’s a wild ride, unprecedented for superhero books of the time, and somehow it all works: Gerber is careful to make each issue 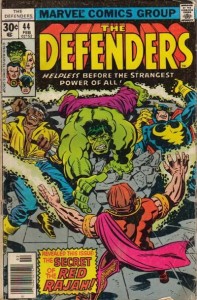 self-contained, even as subplots spin madly, and the whole thing goes from issue #40 to culminate in the 35-page Defenders Annual #1. Gerber and Buscema take a curtain call in issue #41, a straightforward but letter-perfect done-in-one story that shows they can work in miniature too, and then they’re gone.

The title remains, of course, and will for another ten years, although it’ll never reach those heights of inspired insanity again. That’s not to say there aren’t high points: a very young Keith Giffen assumes the art chores from issues #42-54, and his energetic, Jack-Kirby influenced pencils 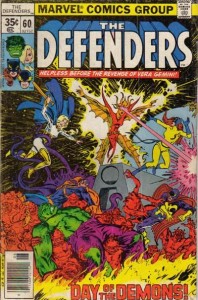 (not that different from what he’s been providing in O.M.A.C.) are fun to watch. David Kraft debuts as writer with issue #44, and will stay through #68; he’s no Gerber, but he knows that the book’s strengths include offbeat team members (Patsy Walker — Hellcat — arrives from the Avengers to begin a long stay, and Moon Knight hangs around for a while), general weirdness (issues #58-60 showcase Kraft’s obsession with the Blue Oyster Cult, including character names and plots lifted from their albums, as #60’s title — “The Revenge of Vera Gemini” — should make clear), and humor (issues #62-64 feature a Defenders recruiting drive that attracts dozens of also-ran and shouldn’t-have-ran bit-player heroes). 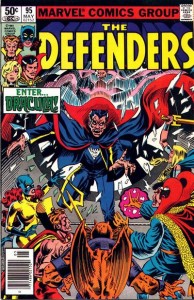 After Kraft, Ed Hannigan comes on as writer from issues #70 – 91; he’s… well, he’s a better artist than a writer, but he’s not doing the interior art of the books, so that doesn’t help; the artists that do appear — Herb Trimpe, followed by Don Perlin — are steady craftsmen but don’t exactly inspire a rabid following. Things don’t liven up until issue #92, when new writer J. M. DeMatteis comes on board; he almost immediately starts up with the kind of cosmic/occult/pop-psychology scripting which marks his style even today — the run-up to issue #100, for example, features one Marvel horror star per issue (Dracula, Ghost Rider, Devil-Slayer, Man-Thing…), culminating in a Satan/Damion Hellstrom fight in issue #100 wherein 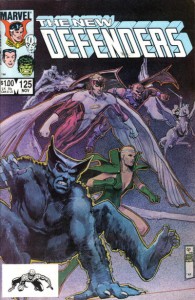 Satan can’t kill the Son of Satan because… well, he’s his son (a typical Dematteis denoument). He and Perlin stay on the book for a good while — through issue #125 — but not much happens, frankly — there’s a Dr. Seuss-inspired change-of-pace in issue #115 — and by #125 the book’s got a new gimmick: Dr. Strange, the Hulk, the Sub-Mariner and the Surfer have been written out, and replaced by the Beast, Iceman and the Angel, as the book’s title changes to The Ex-X-Men (heh… just kidding, although that would have been truth in advertising, and emphasized what Marvel editorial was hoping would bring readers to the book; no, it changes to The New Defenders, which is 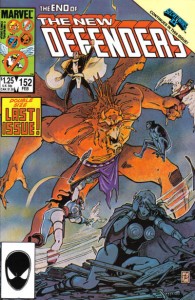 considerably less interesting). In the event, the book from here until its cancellation is mostly just more of the same: Dematteis leaves, to be replaced by Peter Gillis, but the only thing that changes is that there are fewer religious references, and less psychological nattering; the artists include a lot more Perlin (who ended up drawing more issues of the title than anyone else, even Sal Buscema), plus a few fill-ins by Alan Kupperberg, not exactly a household word. The title doesn’t so much end as just slowly fade away, with the end coming in February, 1986, with issue #152. 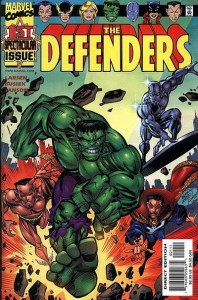 Given its long run, you’d think that a revival would have happened fairly quickly, but the second Defenders volume doesn’t show up until 2001. It’s a hoot, though: Kurt Busiek, who’s one of comics’ better plotters and scripters, teams up with Erik Larsen, and they go back to basics: Hulk, Dr. Strange, Sub-Mariner and the Silver Surfer, with lots of Larsen’s Kirby-inspired action. Most of the team members don’t even like one another — the Hulk and Sub-Mariner, especially; there’s a great early bit when Namor snarls at the Hulk “Don’t touch me!”, and, after a pause,

the Green Goliath reaches out a finger, pokes him, and says with a smirk, “Touch.” Predictable mayhem ensues. However, due to a curse they’re forced to come together whenever the Earth is threatened, no matter what else they’re doing — leading to more humor and more tension, and culminating, after issue #12, in the mini-series The Order, where the Big Four decide that the only way to protect the world and solve their problem is to take it over. That’s a clever, exciting story — but it didn’t generate sales, and after 18 total issues between the two titles, The Defenders was cancelled again. 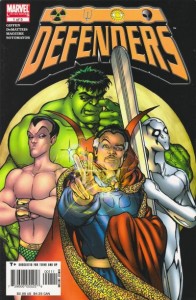 This is the 2005 five-issue series by Keith Giffen, DeMatteis and Kevin McGuire, who bring their Justice League bwah-ha-ha style to Marvel’s non-team. Five issues is just about right; it’s a little too self-satisfied in its cleverness for its own good, but the art is pretty, and the snarky asides help to move things along smoothly. Both Defenders fans and ’80s Justice League fans should seek it out.

With 40 years of experience in comic reading, collecting and reviewing, English Professor Phil Mateer has an encyclopedic mind for comics. Feel free to ask Phil about storylines, characters, artists or for that matter, any comic book trivia. He will post your questions and answers on the AABC blog. His knowledge is unparalleled! He is also our warehouse manager, so if you are looking for that hard to find comic book, ask Phil!
View all posts by Phil →
This entry was posted in Comics History, Marvel, News & Promos, Reviews and tagged Defenders, Dr. Strange, Hulk, Kurt Busiek, Sal Buscema, Steve Englehart, Steve Gerber, Sub-Mariner. Bookmark the permalink.