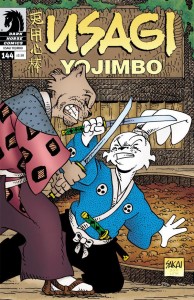 I’ve sung the praises of Sakai’s long-eared samurai before, and this issue is a good example of why: it’s the conclusion of a two-part story involving rival soy-sauce breweries. Sound boring? Not so: Sakai wraps careful research into this ancient Japanese staple (there’s an improbably-fascinating essay about it in the back of the book) around a plot involving a noble businessman, a lazy cop, a loyal employee, murder and poetic retribution, all in his clear, suspenseful, action-packed style. As always: if you’re missing this, you’re passing up one of the best monthly comics out there, one that’s been patiently telling its compelling tales for over 20 years. 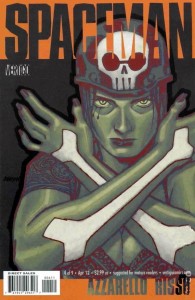 The 100 Bullets team continues their mini-series about a down-on-his-luck, mutated ex-spaceman and his encounter with a kidnapped reality-show tot. Azzarello’s intriguing combination of sf and noir offers the flawed-but-noble hero of the latter, plus the Clockwork Orange-like slang and gritty future-tech of the former, all leavened with little-kid gangs, rocket-ship flashbacks, femme fatales and lots of bad guys out for the main chance; Risso, of course, is perfect at rendering all of this horror, action and sex in his trademark shadowy style. Don’t expect a happy ending, but do expect a wild, entertaining ride. 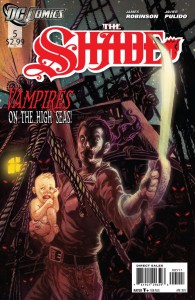 Robinson continues chronicling the adventures of the immortal reformed villain from his  Starman series, and it’s a welcome homecoming: his scripting pops and crackles and offers snarky, philosophical  little asides in The Shade’s narration, and reminds us all why Starman was such an unexpected delight. This is one of the best-looking books out there, too: the main character’s Dickensian top hat and cane make him a striking figure, and between his Darkness-like powers, the exotic Barcelona locale, and the introduction of a half-vampire girl (who’s more than a sidekick but less than a costar), there’s plenty of opportunity for Pulido to showcase his cool-looking art (fans of Chris Samnee should give this book a try). Special mention to Hillary Sycamore, whose vivid but just-right coloring helps to make this one of the best-looking books on the stands. 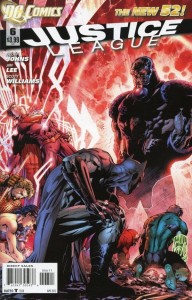 The end of the first story, in suitable-cinematic fashion (there are five splash pages, and four double-splash pages, most of them chronicling a big fight with Darkseid). There’s no need to push, or even describe, this book — you’re all buying it anyway — so I’ll just say that, after a slow start, I think it hung together well, and was just the kind of introducing-the-band story that we all wanted; it’s probably as good as the Grant Morrison/Howard Porter New World Order story that launched a similar JLA reboot in the ’90s (what it gives up to that story in scripting, it makes back on the art), and its inevitable book compilation should delight readers for a similarly-long time. 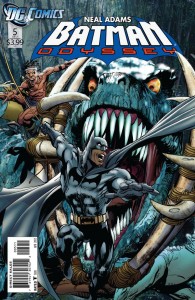 This continues to be a gonzo roller-coaster ride — but, interestingly, not quite the train wreck we all predicted; it’s actually been coming out on time, and is 11 issues into its 13-issue run.  The dialogue is still all over the place (this issue’s clunky highlight is “Blast you, boy… you scared the string out of my knees!” What??), and the cartoony gnomes seem to have wandered in from a totally different book, but Adams is clearly having fun, doing exactly what he wants, and between the dinosaurs and the fights and the dozens of guest stars, it’s a fascinatingly-flawed extravaganza, impossible for comics fans to keep off their 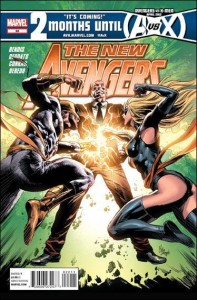 Three from Bendis — the two Avengers books are each the 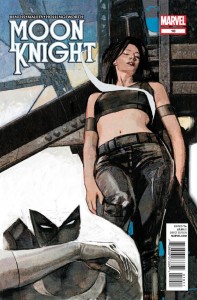 penultimate chapter of their part of the Norman Osborn Siege sequel (it doesn’t matter what order you read them in; they’re taking place simultaneously), and offer plenty of action, crosses and double-crosses and triple-crosses, and the requisite insanely-powerful-but-brilliant adversary; you can’t ask for much more than that in a standard-issue superhero book. Moon Knight is more quirky, thanks to Maleev’s art and the title hero’s multiple personalities; it’s both dealing with the death of a major (well, OK, semi-major… kind of C-list, actually) character and setting up Bendis’s last huge story arc for later this year (the head of Ultron is involved), so it’s worth a look too. 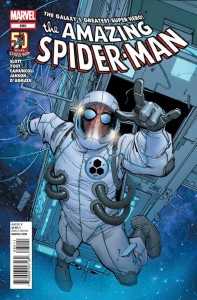 Spidey in space! Colonel John Jameson is up on a space station and has his communication cut off, so Our Hero corrals Johnny Storm into flying up to check it out… and, of course, complications occur. Camuncoli doesn’t seem like an obvious standard-superhero choice (his shadowy style is a better fit for darker books like The Punisher or Daken), but the Janson inking makes a surprisingly-effective combination, and Slott and Yost are a good team, too: this gives the Spidey fan just the combination of adventure, humor and pop-culture references (there’s a callout to Walking Dead) that the book requires.

With 40 years of experience in comic reading, collecting and reviewing, English Professor Phil Mateer has an encyclopedic mind for comics. Feel free to ask Phil about storylines, characters, artists or for that matter, any comic book trivia. He will post your questions and answers on the AABC blog. His knowledge is unparalleled! He is also our warehouse manager, so if you are looking for that hard to find comic book, ask Phil!
View all posts by Phil →
This entry was posted in New Comics, Reviews and tagged Amazing Spider-man, Avengers, Batman, Brian Azzarello, Brian Michael Bendis, Eduardo Risso, James Robinson, Jim Lee, Justice League, Neal Adams, Spaceman, Stan Sakai, The Shade, Usagi Yojimbo. Bookmark the permalink.