It Came From the Back Room #19 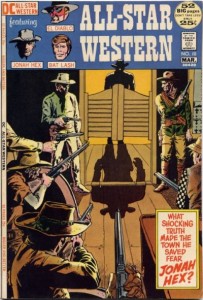 Standard recap: I’m slowly going through AABC’s one-million-plus back-issue room, restocking the boxes on the sales floor and pulling stuff to sell as discount/overstock/special items. I’m going through the alphabet backwards (don’t ask), and at my speed, this amounts to a two-year project. This week, we have the last of “J”:

DC’s grizzled, cynical Westerner has been a cult favorite for decades. His profile’s higher than ever right now (ironically, because of a supremely crappy movie), but it’s the book we’re examining today, and thankfully it’s got a number of high points. There are five stages to Jonah’s comic-book life so far:

Jonah’s first appearance is in All-Star Western #10, in 1972, with a script by John Albano and art by Tony Dezuniga (and available from AABC here). The title changes to Weird Western Tales with #12, and the same team chronicles his adventures in #s 12-14 and 16-21 (he’s not in #15 at all). The familiar outlines are all there: he’s an ex-Confederate soldier, now a bounty hunter in the Wild West of the 1870s,  with a Two-Face-like scar disfiguring one side of his head and a penchant for gritty encounters with various stock Western types.

Weird Western Tales #22 introduces new writer Michael Fleisher, who becomes the Hex writer of the ’70s and ’80s. Fleisher, also known for his Spectre run in Adventure Comics at about this same time (wherein the Spectre has a Golden-Age-like ability to deliver imaginative, poetic and horrible supernatural revenge on various evildoers), brings a similar sensibility to Jonah: the grit and cynicism levels go way up, and Jonah has a Spectre-like preference for delivering bloody and final justice on the bad guys he encounters. Jonah stays in Weird Western through issue #38, with various artists rendering his adventures: notably Doug Wildey in #26, and Jose Luis Garcia-Lopez in #s 32, 33 and 38; he then gets his own title, starting in

April ’77, with Fleisher and Garcia-Lopez still on board. (AABC has some early issues for sale available here, here and here.) Lopez stays through issue #5, replaced by Ernie Chan, while Vincent Alcazar comes on board with issue #13-15 (guest-written by David Michelenie, with Fleisher taking a rare vacation), and then for quite a while it’s a tag-team group of various artists — Alcazar, E.R. Cruz, Dick Ayers, Dan Speigle, Tony Dezuniga, with Ayers gradually taking over the lion’s share of the stories; there’s a young Mark Texiera on pencils in issue #89, and some very pretty Gray Morrow art finishing off the last three issues of the run, in #s 90-92 in 1985. That ending ushers in a new chapter, though, certainly the most unusual in Jonah’s history…

… as our hero, at the end of the last issue, vanishes from his time period, and somehow reappears in the 21st century, in a post-apocalyptic, Mad-Max-Like American wasteland. Fleisher and Texiera start this run, exchanging Jonah’s Confederate outfit for a jumpsuit, giving him a tough-as-nails biker babe named Stiletta, and… well, it’s an attempt to jump-kick the title out of its doldrums (with Westerns having pretty much died as a genre by the mid-’80s), but it’s just not very good; the only cool part is that Keith Giffen, of all people, takes over the art chores for the final four issues, in #s 15-18, and he’s in his full-on mid-’80s experimental mode. Seriously: check these out, because the combination of the gonzo future setting, Hex, 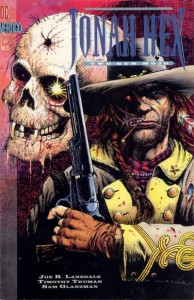 and the Giffen art have to be seen to be believed. Issue #18, from February 1987, puts the character to bed, and is Fleisher’s farewell to him, too. Given the lack of cultural interest in Westerns, fans were forgiven for thinking that Hex, after 15 years of comics, was gone for good.

Of course, this is comics: nothing’s ever gone for good, and as young fans turn pro, they recycle favorites from the past. So it was with Jonah Hex, as in 1993 DC’s Vertigo imprint revived the character as a series of mini-series. 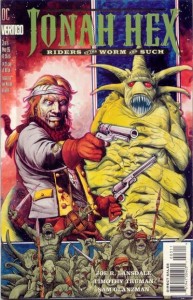 These are cool comics: Penciller Tim Truman, of Grimjack and Scout, is paired with Sam Glanzman, a Golden-Age artist known for Charleton work in the late ’50s through the ’70s (he’s most known for their Hercules, but his work on The Lonely War of Willy Schultz, a WWII-set war book about an American-German soldier behind enemy lines, is probably his best), and they present a meticulously-detailed, grimy and mostly-historically-accurate American West that writer Joe R. Lansdale fills with evil traveling zombie-making carnivals and Native American children with bear’s heads and, most notable, a race of sentient underground worms that have crossbred with humans, producing two moronic albino brothers who are the

spitting image of Johnny and Edgar Winter, the real-life blues guitarists, who, unamused, proceeded to sue DC. This last bit occurs in the second mini, Riders of the Worm and Such, and is probably the ’90s Jonah Hex high point, although the other two series, Two Gun Mojo and Shadows West, offer enough similar pleasures to be  worth seeking out, too.

After Shadows West in 1999, Jonah lies low until January 2006, when DC, probably responding to options and interest in Jonah as a movie franchise, relaunch him under the scripting team of Jimmy Palmiotti and Justin Gray. Jonah Hex proves to be the perfect property for the duo: they begin with meticulously-crafted, mostly 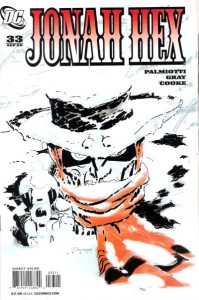 one-issue stories, and their Jonah is even more deeply cynical and grizzled and rawhide-tougher than Fleisher’s. Those finely-wrought plots, and the nigh-irresistable urge among artists, especially European, to draw the American West of the late 1800s, and its many characters and wide-open spaces, has led to an amazing run, one solid self-contained tale at a time. Luke Ross draws the first seven issues, and then old Jonah renderer Tony DeZuniga does a few, but there are lots of buried-treasure artists here: Paul Gulacy, Russ Heath, Darwyn Cook, J.H. Williams III, Billy Tucci. The current default artist is the amazing Jordi Bernet, a 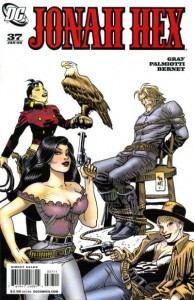 Spaniard who’s been doing good work since the early ’60s, and whose joy at getting to bring Jonah’s twisted, caricatured carcass and cast to life makes for fierce and appealing storytelling. (Scattered issues of these, and the Vertigo series, and the Giffen Hex run, and even a few of the original Fleisher comics are available on the cover-price racks near the back register this week and next, so justify these reviews and come check them out.)

With 40 years of experience in comic reading, collecting and reviewing, English Professor Phil Mateer has an encyclopedic mind for comics. Feel free to ask Phil about storylines, characters, artists or for that matter, any comic book trivia. He will post your questions and answers on the AABC blog. His knowledge is unparalleled! He is also our warehouse manager, so if you are looking for that hard to find comic book, ask Phil!
View all posts by Phil →
This entry was posted in DC, News & Promos, Reviews and tagged Jonah Hex, Jordi Bernet, keith Giffen, Michael Fleisher, Sam Glanzman, Tim Truman. Bookmark the permalink.