And we’re back! My football-related things are not going well, so I’m just gunna take a step back and read some comics. Let’s do this! 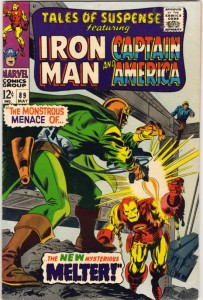 So around this time in the 60s, Cap came back with WWII stories (not returning to modern times until Avengers 4) . So Tales of Suspense became the go-to title for anything Iron Man or Captain America. And it’s actually really good! Stan Lee is at his best when he’s limited to an eleven-page story. He doesn’t go wild with extra love plots; he doesn’t throw around a bunch of stupid things, he’s just telling stories and getting down to business. Add to this the fact that you get art from Gene Colan in his prime, and Gil Kane doing his thing for Cap, and you basically get everything you can ask for from a Silver Age Marvel comic. More info can be found HERE 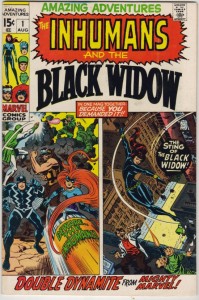 Man this is a weird book! As Marvel gets into the 1970’s, they’re still trying anything, but the success rate is not as high. Take this example. Do you really think an Inhumans/Black Widow co-starring book would ever survive in this modern economy? Well, that’s what you got with Amazing Adventures. And that’s not to say it isn’t cool. Kirby does the traditional Inhumans stuff, the whole “I’m not gunna talk” Black Bolt, “judo-chopping” Karnak and more. The Black Widow story seems more modern for the times, with John Buscema providing the art. It’s written by a guy that I legitimately know nothing about (Gary Friedrich) so I feel kinda bad about that. More info can be found HERE

The Inhumans have been popping up a lot in FF lately. After Black Bolt was discovered as being a Skrull, they disappeared, but are progressively coming back. Black Widow always pops up in the Daredevil title, and right now she’s part of the Secret Avengers, which is actually really good as long as Warren Ellis is writing it. 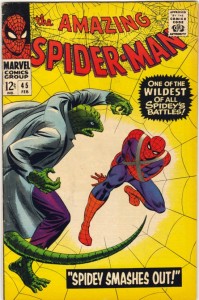 So in this issue, a one-armed Spider-Man is forced to fight the Lizard, the same villain who already broke his arm. What. A. World. My problem with Amazing Spider-Man is that it’s always the same thing. He’s using that great power and great responsibility and overcoming the odds to step up and win and blah blah blah. Now Romita’s work is the absolutely classic art that you come to love (and definitely a step above his highly-stylized son currently working on Avengers). Romita’s art is classic, and it never gets boring to look at. The fight scenes are very well done, but I just feel like it’s the same story I’ve read several times before. More info can be found HERE

Spider-Man has a new movie next year, and is still absolutely everywhere. The Amazing Spider-Man title still comes out 2 or 3 times a month, he’s in the New Avengers, the FF and more. Just seriously grab a Marvel title and he’s probably going to be in it.

And that’s it! I’m going to go cry some more about football.