It Came From the Back Room #21

Standard recap: I’m slowly going through AABC’s one-million-plus back-issue room, restocking the boxes on the sales floor and pulling stuff to sell as discount/overstock/special items. I’m going through the alphabet backwards (don’t ask), and at my speed, this amounts to a two-year project. This week, we’re continuing the letter “I,” and featuring the second half of The Invincible Iron Man. In our last episode, we got up to the end of Shellhead’s first run, which ended with issue #332, in 1996. If you’d like to see some high-end offerings of those early issues, check our stock here, here, here and here. In addition, check out the set of Iron Man Volume 1, from issue #1 up, that the store just purchased, now in the display case in my corner at the back of the store.

In the mid-’90s, Marvel was looking for a way to jump-start flagging interest in many of

its titles, and they settled on a novel solution: first, use the X-Men “Onslaught” storyline to make the Fantastic Four and the Avengers disappear from the “real” Marvel Universe, and then take the opportunity to reboot four related titles (Fantastic Four, Avengers, Captain America and, yes, Iron Man) in an alternate universe, where the characters’ origins could be updated and modernized  (a proto-Ultimate Universe, five years before those stories began.) The biggest wrinkle was that they outsourced creative work on the books to two Image creators who were formal Marvel staffers: Jim Lee and Rob Liefeld. Liefeld had responsibility for the Avengers and Captain America relaunches, while Lee took over FF and Iron Man.  The contracts were for 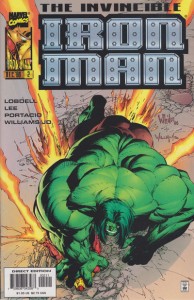 12 issues, although after six Liefeld (whose Captain America, especially, had been mocked for its amateurish anatomy and slapdash plotting) bowed out after Marvel tried to renegotiate the contract, and Lee’s Wildstorm Studios took over his two books.

Anyway, Iron Man: Lee co-plotted the stories, although Scott Lobdell did the script, and Whilce Portacio provided the art for the first three issues, with Ryan Benjamin doing the honors on issues #4 and 5 (Lee himself shared pencil duties on #6 with Portacio and Benjamin, while those two, sometimes assisted by writer Jeph Loeb and penciller Terry Shoemaker, finished the year).  There was an “extra” 13th issue of all four titles, written by current JLA writer James Robinson and for Iron Man drawn by Larry 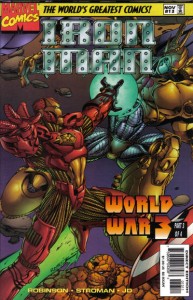 Stroman, featuring a bunch of Image characters crossing over with the alternate-universe Marvel ones, and that was it for Heroes Reborn.  Truth be told, after an energetic first few issues (guest-starring the Hulk, which upped the energy level considerably), the story descended into confusion and boredom; the musical-chairs creative teams are, depending on your viewpoint, either a symptom or a cause of that. However, it may have been worth it, since this year’s break did set the stage for Tony Stark’s next volume:

The great thing about this third volume is that scripter 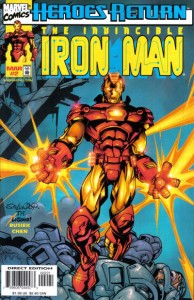 Kurt Busiek used Heroes Reborn as an excuse for a clean slate: wisely, he completely ignored the “Teen Tony” plotline at the end of the first volume, and presented readers with the grownup, suave industrialist Tony Stark (and Pepper Potts, and Happy Hogan, and James Rhodes) that they were familiar with. Busiek’s tight scripting and knowledge of Marvel history let him bring back a series of classic Iron Man villains — Firebrand, Spymaster, the Mandarin, Madame Masque, the Controller, even Fin Fang Foom — and make them seem shiny and new, and integrated into current Marvel continuity via appearances by the FF, the Avengers and other characters. Roger Stern came aboard as co-plotter and 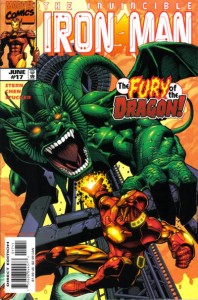 scripter after the first year, and he and Busiek meshed well together; penciller Sean Chen provided solid but unspectacular art through their departure with issue #25, and continued for a few more issues as Joe Quesada took over scripting chores, beginning with an interesting three-parter involving the armor becoming sentient and then trailing off (Quesada’s scripting, not the armor).  Quesada was eventually helped, and then supplanted, by Frank Tieri; various lower-level artists, including Alitha Martinez and Keron Grant, teamed with him through issue #49, in an era that is, frankly, not the most memorable in the Golden Avenger’s long history. 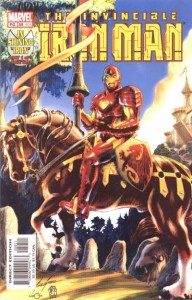 Help was on the way, though, in the form of Mike Grell, who had left the indy world (and his long-running Jon Sable) and come to Marvel, where he began scripting Iron Man with issue #50. Grell, mostly with penciller Michael Ryan, brought a gritty real-world sensibility that combined well with the book’s high-tech atmosphere to yield a lot of James Bondish super-adventure; probably the high point of this run is issues #59-61, “In Shining Iron,” a time-travel Camelot tale with both art and story from Grell that’s reminiscent of the earlier Michelenie/Layton medieval story but has a much different tone, and stands well on its own.

Grell and Ryan continued through issue #66, and then after a few fill-in issues John 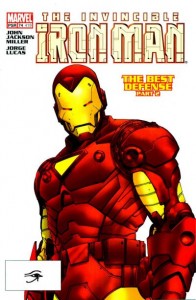 Jackson Miller, known until then as an editor for Comics Buyers Guide (and, full, disclosure, one of my old editors, from when I worked for that publication), began scripting over Jorge Lucas’s pencils. His first arc, a six-parter where Stark gets nominated to be US Secretary of Defense, is well-plotted and well-told, and makes a good story (and trade paperback) even today. Miller followed that with another arc, a four-parter with Philip Tan, and then a few issues later it was late 2004, and time for another shakup in Marvel continuity: the Brian Michael Bendis Avengers Disassembled tale that spilled over into most of the other Marvel titles that fall. Miller provided the first few issues of the tie -in, and then others finished it, and the third volume of Iron Man ended with issue #89, in December 2004.

There’s no hiatus this time — issue #1 of the new series starts just a month after the old one — but it starts with a bang nonetheless: Warren Ellis comes aboard for a six-issue story, “Extremis,” that has all of his trademark futuristic tech, violence and full-blast action, as Stark is forced to experiment on himself and becomes something more than human, a combination of flesh and nanocybertechnology that lets him meld seamlessly with his metal suit. Adi Granov’s art is a perfect match for the flash and substance here, and the story is one of the better ones in recent Iron Man history.

The problem, of course, is that after fireworks like that there’s nowhere to go but down. 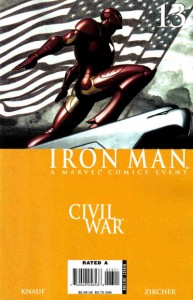 Scripters Daniel and Charles Knauf, and penciller Patrick Zircher, have the unenviable task of following Ellis and Granov; it doesn’t help that, by issue 13, the title’s crossing over with the Civil War event, which requires Tony to act like a big butthead, and that he then becomes the director of SHIELD, Marvel’s super-spy organization (the cover title changes to Iron Man, Director of SHIELD with issue #15), and now has to contend with supporting cast members like Dum Dum Dugan. Various pencillers cycle in and out over this period (most notably Butch Guice), but the editorial fiats and various company-wide events (culminating with Secret Invasion) make it hard to stay awake, let alone remember the plots of the books, or who did what. The title ends again with issue #35, in January 2009. 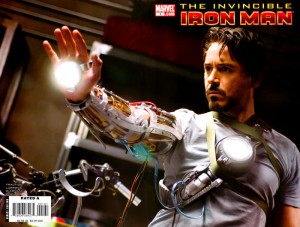 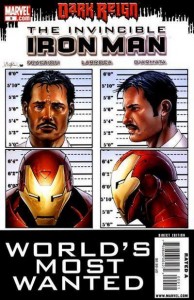 Fortunately, six months before the end of Iron Man, Director of Shield, Marvel had started a second Iron Man book, The Invincible Iron Man, cover-dated July 2008 but arriving on the stands that May, just in time for the release of the first Iron Man movie. This second book became the “main” Iron Man book in short order, for a couple of reasons. One was that the “other” main book was mediocre; another was artist Sal Larrocca, whose ability to draw high-tech hardware and human expressions, and make them both well-designed and expressive, was a good fit for the character. The main reason, though, was writer Matt Fraction, who proved very canny at providing a Tony Stark that was familiar both to old-time fans and to new readers attracted to the comic from the hit movie, a difficult high-wire act that he made look effortless. By the

book’s eighth issue, he and Larrocca embarked on World’s Most Wanted, a long serial that stripped Stark down to the essentials, as a vengeful Norman Osborne used all the resources of the US government to try to track him down and make him reveal all of his secrets. By the end of that arc, and especially after the next one, Stark Deconstructed, Fraction and company had done the seemingly impossible — they’d taken an unsympathetic character and rehabilitated him completely, using  a number of clever twists to both acknowledge his past mistakes and absolve him of guilt for them. Fraction and Larroca continue to create new Iron Man stories today (the numbering on Volume 5 went up to issue #33, and then reverted to the original numbering, because the next issue was #500, about three months ago) Thus, for the last few months the title has been back to Volume 1 again, a fitting place to leave it, and end this article. (As always, bunches of these books are currently available at cover price, on both sides of the display rack by the back cash registers, on the west end of the store….)

With 40 years of experience in comic reading, collecting and reviewing, English Professor Phil Mateer has an encyclopedic mind for comics. Feel free to ask Phil about storylines, characters, artists or for that matter, any comic book trivia. He will post your questions and answers on the AABC blog. His knowledge is unparalleled! He is also our warehouse manager, so if you are looking for that hard to find comic book, ask Phil!
View all posts by Phil →
This entry was posted in Comics History, Marvel, News & Promos, Reviews and tagged Heroes Reborn, Heroes Return, Iron Man, Kurt Busiek, Matt Fraction, Mike Grell, Salvador Larroca, Warren Ellis. Bookmark the permalink.

One Response to It Came From the Back Room #21