Whoa, it’s late on a Sunday and I’m late with the reviews.  How responsible! Let’s do this: 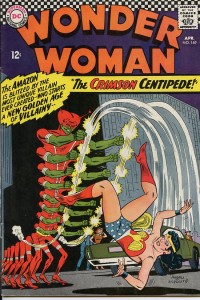 So there’s this Crimson Centipede right?  Multitude of arms and legs, so on so forth.  Nineteen sixty-seven was a freaking genius time.  This villain carries guns in his right hands, and stolen money in his left, so what’s not to love?  Add to that the fact that this guy also uses those arms to run super fast.  I can’t make this kind of genius up.  The art is kinda terrible, but in one of those “I’m looking at a giant centipede” kinda ways.  In the end, the craziest moment has to be Bob Hope explaining the “Golden Rule” to a bunch of kids in a public service announcement.  This book was absolutely crazy, but really, can I possibly complain?  More info can be found HERE

Wonder Woman is still found all over the place.  She’s in a weird alternate reality story in her main title, and I believe she is still around in the JLA.  There’s also plenty of back issues and trades waiting at your local All About. 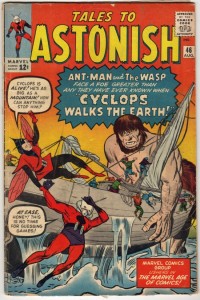 Remember like two seconds ago when I told you the 60s were genius?  Well, here’s another example.  “When Cyclops Walks the Earth” is just complete madness on every level.  It’s pre-abuse Ant-Man and Wasp, back when all they did was crazy crap.  But on the other hand, this story is wickedly wordy.  As always, Stan Lee is in love with his gift of words, and makes sure that everybody has to be too.  It turns out that the Cyclops is in league with some aliens, because, well.. why not?  This is still an anthology book, so there’s a good ol’ fashioned horror story.  Also a quick Ditko story!  It’s crazy stuff, but what’s not to love?  More info can be found HERE

Wasp is dead.  Yup, still dead.  She died at the end of Secret Invasion.  Hank Pym has ditched the Ant-Man costume and is now the Wasp (confused yet?).  Look for Hank in the Avengers titles, and not much else. 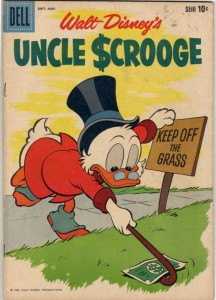 Uncle Scrooge stories are hard to describe.  There are always several stories by different artists.  So you’ll find one with Donald complaining about money, then the next will have Scrooge in a weird dress looking like little bo peep.  I can’t even begin to explain this kinda stuff.  It’s got Gyro Gearloose doing his usual “experiments going awry” schtick, and sometimes it just has some one-page joke story.  What is mostly worth noting is that it has a Carl Barks story.  If you don’t know what that means, come to the store and ask the Professor, cuz’ he knows way more about this kinda stuff then I do.  More info can be found HERE

Uncle Scrooge is still being published today, and it consistently comes out on a monthly basis.  Isn’t that nice when comics come out on time?  There’s also some collections; again, if you’re interested, ask us!

And that’s it folks!  I’m on Spring Break, so look for me to be especially lazy when you see me at the store this week!