It’s an all-DC special today.  We have three interesting comics to look at.  Let’s do this! 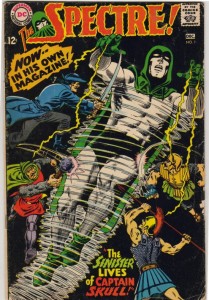 Seriously.  This issue is all about the Spectre fighting the astral form of a pirate hopping through time to try to be the richest and most powerful man ever.  I am not clever enough to think of an idea like that.  It’s a cross between the spooky ideas of the Spectre and pirate stuff.  I just don’t know how I feel about it.  It was so completely bizarre and full of bright colors and jumping around time and sword fighting that I kind of have to love it.  It seemed a lot like some of those Strange Tales Dr. Strange Steve Ditko issues.   However, Murphy Anderson on art was a slight down step from what Ditko could do in Dr. Strange.  It was still very pretty to look at, but just… strange.  More info can be found HERE.

The Spectre is kinda all over the place these days (get it, cause he’s a wandering ghost?) he often shows up in big crossovers, and currently uses the former Gotham City Detective Crispus Allen as his other half.  Two recent minis are available in trade. 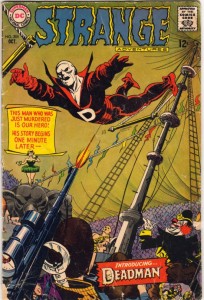 Worth noting because it’s the first appearance of Deadman, and my bias is again shining through with how much I enjoy this.  I think the whole concept of Deadman is really amazing, and it works perfectly in this kind of story.  It’s all about the origin, showing Boston Brand’s death, rebirth, hints of Rama Kushna’s involvement, and establishes his abilities.  It’s a fun little origin story, and leads to even better stories later on.  There’s another story in the back that’s all about aliens who can read minds trying to trick us puny humans, and that just makes this entire thing a fun book to read.  Strange Adventures, you never fail me!  More info can be found HERE.

Deadman is now alive again.  He is the most prominent character in the current Brightest Day mini-series after coming back to life during Blackest Night.  There was also a strange Vertigo series a couple years ago, and he popped up in the Blackest Night: Batman mini-series. 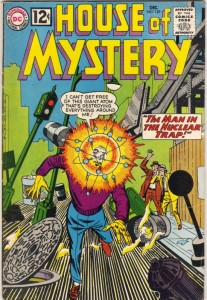 These issues are always misleading.  The cover story never pops up until the end with these anthology books.  There was plenty of strange to go around this issue.  The first story was about a guy with a random doo-hickey that was saving his society, the second was a weird horse story that I could not read.  The third was the cover story where a guy gets a giant iron atom stuck to his head.  You heard me, he has an atom stuck on his head.  And it causes an alien spaceship to be so attracted that it crashes into Earth.  He couldn’t get into any vehicles, so he runs away from a spaceship on a horse.  What’s not to love about this thing?  Nothing, it’s one of the best stories ever.  More info can be found HERE.

House of Mystery is now a strange Vertigo series that’s not bad, but has an actual plot.  It’s not the same as the anthology series from the ’70s, but worth checking out.  There are also plenty of back issues of House of Mystery available at All About Books and Comics!

And that’s it!  Enjoy!  Request more from me, I live to serve.

This entry was posted in Reviews, Silver Age and tagged 1962, 1967, DC, House of Mystery, Silver Age, Strange Adventures, The Spectre. Bookmark the permalink.