It Came From The Back Room #7 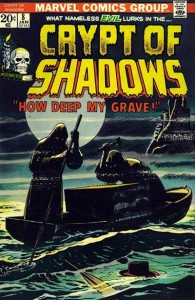 Marvel Universe (Official Handbook of the…)

Most of the overstock we have on these are from the two ’80s collections. There was a time when every true Marvel zombie just had to have these; with online references now widely available, they aren’t as crucial any more, but they’re still a lot of fun: watching the writers try to explain how Peter Parker can pack all that energy into that scrawny body,or just how Thor can throw his hammer, catch it and then fly with it, is about as close as you can get to geek heaven. 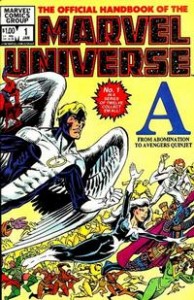 We also have some cheap copies of the Official Marvel Indexes that have been coming out the last year or so: these offer credits, character appearances and plot summaries of a bunch of titles at once, and are a handy reference/checklist if you’re looking for specific creators of guest appearances to fill out your collection.

This is a good example of how a title can outlive its inspiration: the ’70s kung-fu craze lasted less than a year, yet this title lasted well over 100 issues. How? Take a solid, craftsmanlike writer (Doug Moench) who’s expert as surrounding the hero with an interesting, exotic supporting cast, mix in a series of cool artists (Paul Gulacy, Mike Zeck, Gene Day) and there you go. Most of the early issues aren’t available as overstock, but a couple are, and there are quite a few issues over about #75 available (seriously: you probably know about the pleasures of Gulacy and Zeck art, but check out the Gene Day stuff, roughly between issues #100 and 120, for its obsessive detailing, design-oriented panel composition and the seamless way he meshes the visuals with Moench’s stories). 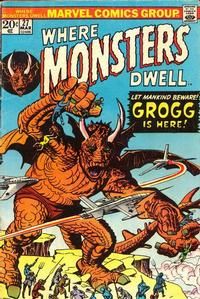 Yep, just in time for Hallowe’en: we’ve got most of the ’60s and ’70 Marvel horror titles — all the ones that reprinted the Atlas pre-superhero stuff, plus the ongoing series like Man-Thing, Tomb of Dracula, etc. — all in one alphabetized group, so I skipped past some other “M” books (Marvel Two-In-One, Marvel Tales, Marvel Team-Up) to get to these first, and pulled out anything that was, oh, $4 or less to stick into one of our special Hallowe’en boxes. The best series are Tomb of Dracula and Man-Thing: TOD for the Marv Wolfman scripts and the gorgeously moody Gene Colan/Tom Palmer art, and Man-Thing for the literate, groundbreaking Steve Gerber scripts (although Jim Mooney brings just the right human touch to the visuals, too). 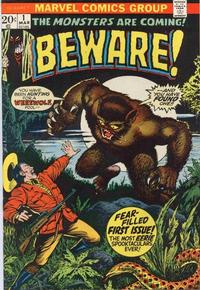 The real fun, though, is in discovering all the other remnants of the great ’60s/’70s horror revival, from original short stories by artists like Adams or Kane or Brunner in books like Tower of Shadows or Chamber of Chills or Journey Into Mystery, to all those great Kirby and Ditko monster reprints in Where Creatures Roam or Monsters on the Prowl, to the even earlier gonzo ’50s tales of werewolves, vampires and general Stan Lee-scripted mayhem in titles like Beware, Vault of Evil or Uncanny Tales (with art by the likes of Bill Everett, George Tuska or the great, too-little-known Joe Maneely). For less than the price of most new comics, you can check out some obscure, fascinating bits of Marvel history and get in the mood for trick-or-treating at the same time!

With 40 years of experience in comic reading, collecting and reviewing, English Professor Phil Mateer has an encyclopedic mind for comics. Feel free to ask Phil about storylines, characters, artists or for that matter, any comic book trivia. He will post your questions and answers on the AABC blog. His knowledge is unparalleled! He is also our warehouse manager, so if you are looking for that hard to find comic book, ask Phil!
View all posts by Phil →
This entry was posted in Marvel, News & Promos, Reviews and tagged Beware, Chamber of Chills, Doug Moench, Gene Colan, Gene Day, Horror, Journey into Mystery, Man-Thing, Marv Wolfman, Marvel Universe, Master of Kung Fu, Mike Zeck, Monsters on the Prowl, Paul Gulacy, Steve Gerber, Tomb of Dracula, Tower of Shadows, Uncanny Tales, Vault of Evil, Where Creatures Roam. Bookmark the permalink.