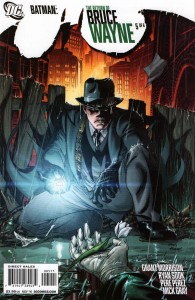 Um… yeah, so a bunch of DC books out this week are one-shots set after the return of Bruce Wayne, but here we have a very late issue #5 of 6 of said “return,” and he ain’t quite back yet (if it wasn’t obvious from the beginning, now I guess we know how it’s all gonna turn out, eh?). The fact that the second half of the book is by a different art team than the first hints at reasons for the lateness — but, you know what? It doesn’t really matter. This features a time-traveling, amnesiac Wayne ending up in Gotham a few days after his parents were shot, and being tapped to help solve his mother’s murder. Apparently. It’s all hard-boiled betrayal and tough-guy talk and dames, and the Black Glove and Barbatos and, in the event, a really cool story that begins to close the circle on all the little hints and plot twists and questions that Morrison’s been dropping in his Bat-stories over the last two years. Late? You bet. Worth it? That, too — and you can also bet that I’ll be there, eagerly, whenever the last issue of this tale finally arrives. 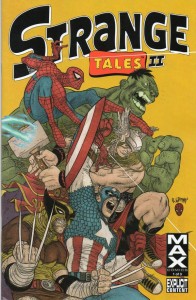 Like last year’s model, this mini-series features a bunch of indy creators set loose on the Marvel Universe. The anthology format has some weaknesses: most of the efforts are just four or five pages, if that, and it seems like half the contributors decided to do a Wolverine story, leading to Logan overload. Still: Jhonen Vasquez explaining why you should never show a Sentinel that cool trick with your thumb that you do (and drawing a morose Wolvie pigging out on hot dogs)? Shannon Wheeler channeling Jack Kirby with the Red Skull and Captain America? Dash Shaw and Spider-Man? Gene Yang on the Man-Frog? Jeff Lemire on Man-Thing? Kevin freakin’ Huizenga? Nick “Perry Bible Fellowship” Gurewitch? At 48 pages of mind-melting weirdness for $5, you cannot deny this comic a place in your home, and heart.

Fraction’s first issue. I’m not sure I like the “let’s immediately start in with the portents of doom and the subplot about the massive cosmic foe that’s coming for us very soon,” but hey: this title’s always been about the big bad guys (Mangog: the energies of “a billion billion beings,” as Stan and Jack kept telling us…), and I do like the touches of humanity, including the way Thor gets played as a bit of a butthead (Loki, Thor? Really? That seems like a good idea to you?), and the clean-lined art — with a special nod to the coloring, by Hollingsworth, which plays against it just about perfectly. Given the high quality and fun factor of the other Thor comic out right now (Thor: Mighty Avenger #5), Marvel seems to be creating actual cool stuff in preparation for all those movie fans next year: an encouraging sign of actual corporate competence. 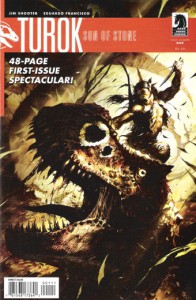 These two Gold Key/Valiant/Acclaim revivals by Shooter are both very old-school: they’re focusing on what made the titles memorable in the first place. Shooter’s Valiant version of Magnus was always pretty close to the original, and still is; there’s the familiar sf-flavored philosophizing about the nature of consciousness and the injustices of future-city social engineering, interspersed with lots of mechanical mayhem and hints of sex. The Valiant Turok was changed up quite a bit, but now seems even closer to the Dell/Gold Key version: it’s Native American noble-savage characters filtered through a pseudo-father-son relationship, all poured over a background of space warps, dinosaurs, hostile tribes, tomahawks and arrows. Does it work? Sure does — if Shooter can keep the titles going long enough to establish an audience, and not get caught up in editorial fights or other outside hassles, both of these titles might have long runs. 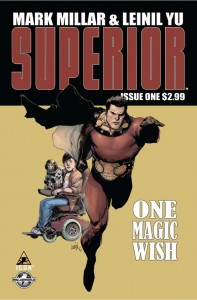 This is the opposite of the realism in Kick-Ass: a Captain Marvel riff wherein a typical kid gets Superman-level powers thanks to… a magic wish from a monkey-like being from space. Considering the source, I wouldn’t be surprised if the monkey turns out to be a Lovecraftian elder god invading our dimension, or the whole thing some kind of heroin-induced hallucination because the kid’s really a junkie, or insane or something.  Millar swears not, though; in an accompanying editorial he calls this almost “family friendly” (except for the swear words), so maybe he’s just broadening his repertoire (or going back to his roots —  it’s easy to forget his first superhero gig was a long run on Superman Adventures…). Yu’s solid but unspectacular so far, although this first issue is more set-up, and Big-style misunderstandings as the kid comes back home in a grown-up body, so there isn’t much chance to show what he can do with super-stuff yet. I’m intrigued enough to pick up the next issue, so let’s call this a tentative success for now.

Lots of British heroes and villains you’ve never heard of, all drinking together in a pub. It’s all amiable enough, like Warren Ellis minus most of the paranoia and nastiness; Broxton makes it feel British, and Cornell makes it fun, and an effective meditation on heroism and tolerance. Like Superior, it doesn’t accomplish a lot, but it’s enough to bring me back for another issue….

Stuff I bought, but don’t have anything new to say about, so read previous reviews in the archives if you’re interested: 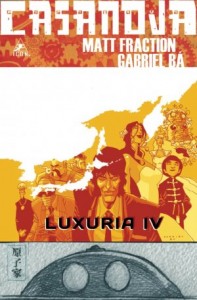 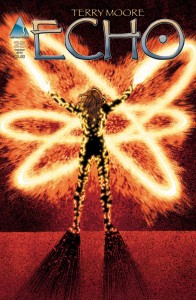 With 40 years of experience in comic reading, collecting and reviewing, English Professor Phil Mateer has an encyclopedic mind for comics. Feel free to ask Phil about storylines, characters, artists or for that matter, any comic book trivia. He will post your questions and answers on the AABC blog. His knowledge is unparalleled! He is also our warehouse manager, so if you are looking for that hard to find comic book, ask Phil!
View all posts by Phil →
This entry was posted in New Comics, Reviews and tagged Bruce Wayne, Dash Shaw, Gene Yang, grant Morrison, Jeff Lemire, Jhonen Vasquez, Jim Shooter, Kevin Huizenga, Knight and Squire, Leonil Francis Yu, Magnus, Mark Millar, Matt Fraction, Nick Gurewitch, Paul Cornell, Shannon Wheeler, Strange Tales II, Superior, Thor, Turok. Bookmark the permalink.