Holy Moses…we’ve done 40 of these! That’s a lot folks. If you’ve read every one, I’m kind of worried about you, but good job! Let’s do this! 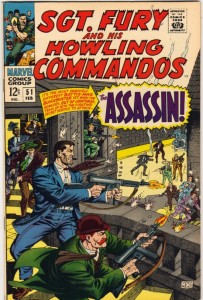 Evil Nazis! Now that I have your attention, this is another “Nazis try to kill all the leaders of the Allied forces” that you get from a comic in the 60s… Hey wait-a-minute… didn’t the war end like 20 years before this comic came out? Whatever, anyway! One of the Commandos (the movie star) gets captured by a Nazi (with a conscience) who is trying to save his family by doing Hitler’s bidding. It’s a pretty standard war tale, and exactly what you’d expect. Then it ends with a double suicide. That’s the kinda stuff that even I’m not smart enough to make a joke about. More info can be found HERE

Sgt. Fury came back as Nick Fury, Agent of S.H.I.E.L.D. which then led to Secret Warriors. I’m not even sure where he stands anymore because Secret Warriors came to an end. I think it’s safe to assume he’ll pop up in any of the Avengers titles sometime soon. 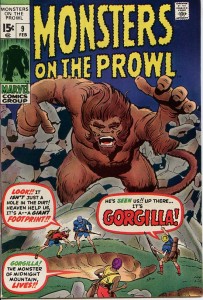 While this comic book is from 1971, it appears to be reprints of 1950’s material, so let’s see what the 50’s has to offer! Mainly it has “Gorgilla! The monster of Midnight Mountain!” After attacking some stupid travelers, that monster then fights a dinosaur. That’s it. That’s all there is to that first story. The second story involves a dumb American who won’t let anyone in the desert tell him what to do.  He gets trapped in a Pyramid (obviously). The third story is about a cloud monster catching a spaceman. I think you might be noticing the pattern here. The real draw is the piece of Ditko art, but without proper credits, I’m not sure which story it is. More info can be found HERE

I cannot think of a story that has monsters like this in it anymore. If you’re looking for vampires and Man-Thing and stuff like that, go with “Legion of Monsters,” but otherwise, you’re out of luck. Big monster creatures just ain’t what they used to be. 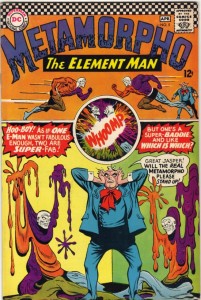 Oh man, Metamorpho is seriously so weird! It starts with Metamorpho eating a timebomb planted on a train. Do I need to repeat myself? Well, Professor Stagg, who of course hates Metamorpho because he’s in love with Stagg’s daughter, creates a new Metamorpho, and no one can tell the difference! What a horrible coincidence! Obviously, this other Metamorpho has evil intentions. Stagg was planning to work with him to build a new type of building, but this guy wants to destroy all other buildings. Can he possibly be stopped? Well, the obvious answer is yes, and he does, but c’mon. This thing is just the right amount of bizarre to be awesome. More info can be found HERE

Metamorpho hasn’t made his debut in the new DC 52… yet. His last appearance was in the Outsiders, but I’m sure we’ll see him either in Justice League Dark, DC Universe Presents or some random cameo. Just wait and see.

And that’s it! I have football to watch, so there I go!

This entry was posted in Reviews and tagged Metamorpho, Monsters on the Prowl, Sgt. Fury. Bookmark the permalink.