The emmy goes to… Top Chef!  And no one really cares.  Dan talks about old comics… and everyone cares!

Immediately I want to point out that Hawaii wasn’t a state when this came out, and they have a whole section discussing all 49 states, which is AWESOME.  Also, Robin uses the bat-plane to blast exhaust into a bad guys face just to disable him.  All this happens before Batman and Robin fight the giant Kodiak Bear.  Add in some “native eskimo tongue” and you’ll slowly start to realize how awesome this all is.  And that’s just the first story.  Add in another one that was kinda boring and the Firefly story on the cover and you get some seriously sweet silver-age goodness.  That firefly story actually has the line “I have come for Mr. Carson’s Gold Nuggets!” Which just makes me smile every time.  More info can be found HERE

Batman and Robin are in interesting territory right now.  There are several different incarnations of each character, but Bruce Wayne is now wandering through time, and Dick Grayson is currently Batman (but for how much longer…?) 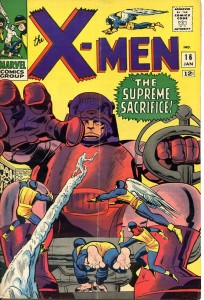 Well… They can’t all be winners can they?  In the mighty Marvel tradition, this X-men issue has a lot going on.  Stan Lee makes sure every character has a lecture, an epiphany and a fight scene in just this issue.  Jack Kirby does his usual work, so ya know what you’re getting depending on your opinion. The problem is it’s just so dense.  You may not know this, but Stan Lee writes A LOT.  It’s almost like he doesn’t trust the artist to handle everything he wants to happen so every single person has to say what they’re about to do, do it, then remark on how successful they were at doing it.  It’s all a bit ridiculous, and not quite as fun as it sounds.  X-men is still a giant soap opera in these early issues, and it’s a bit painful. More info can be found HERE

X-men is still going and has surpassed 500 issues.  The best stuff to read is New X-men by Grant Morrison, it’s just so crazy that it works.  Currently Matt Fraction writes the Uncanny issues, and it’s pretty good stuff. 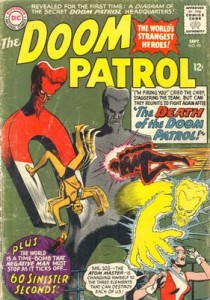 Well this was just ridiculous.  The Professor is put in an iron lung after the mysterious Mr. 103 attacks him.  I’m not even 100% sure how they defeated him.  I just know that the bad guy was progressively turning into everything that could stop the Doom Patrol (as was implied on the cover) and then all of the sudden they were completely done and had defeated him.  Interesting… but I’m still not sure what exactly happened.  The second story was a Mr. Negative tale, he almost dies as he often does, then survives.  Goofy silver age fun, and it’s basically where Stan Lee stole the idea for the X-men, so there’s that.  More info can be found HERE

The Doom Patrol became popular again in the late 80’s when Grant Morrison got a hold of them.  They are currently in a series written by Keith Giffen, available at your local comic shop!

And that’s it! In the span of writing this Mad Men has lost every acting award at the Emmys, so you can guess my mood.  It’s a sad one.

One Response to Fresh Eyes on Old Books #4 by Dan!