And we’re back again. I’ve suffered heartbreak this week at the hands of ASU football, and before the Cardinals stomp what’s left of my soul, I’m going to review some comics. Let’s do this! 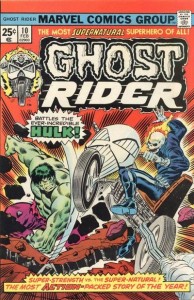 Ghost Rider is just really, really weird. The nice thing about old school Marvel was that they were honest. This issue is completely a fill-in guest starring the Hulk, and they blatantly announce it for everyone to see.  ANYway… There’s a ton of Ghost Rider angst with Johnny Blaze desperately not wanting to be the title of this comic, and it’s kinda understandable. Best part about this comic? The Hulk ISN’T IN IT AT ALL. That’s right folks, this is above and beyond the traditional false advertising brought to you by comics. The special guest star on the cover doesn’t show up at all. To me, that’s hilarious, but I have a feeling 1970’s fans of this comic were none too happy…

There’s a new Ghost Rider series featuring a lady as the Rider. However, it’s about to be canceled, so you can get the complete series pretty easily… There’s a ton of trades of old Ghost Rider series, written by everyone from Garth Ennis to Jason Aaron and more. 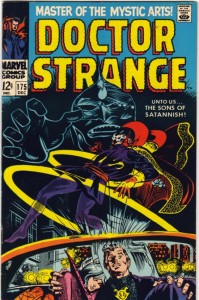 For some reason, I’m really surprised by the fact that this book is drawn by Gene Colan. It seems like he’s trying stuff much different from his Daredevil stuff. He’s got this off-panel layering that actually shows a direct influence on modern comics. The story itself is very ‘meh,’ being a traditional Dr. Strange story. That means you’ve got the supernatural stuff interfering in the normal world, and a strange cult worshiping Satannish (who looks like a blatant rip-off of Dormammu, but we’ll let that slide). It’s a to- be- continued story, but it’s just kinda boring and doesn’t keep me wanting to read it. Fun to look at though… More info can be found HERE

Doctor Strange probably hasn’t had a series for himself in several years, but he’s making a come back with the new Defenders series. That’s written by Matt Fraction and drawn by Terry Dodson, with a sample in the big ol Marvel Point One issue that came out a couple weeks ago. It sounds interesting…. 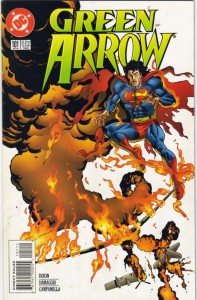 Did you guys realize that they killed Oliver Queen over 15 years ago? I was seven at the time… just putting that out there. This issue shows Ollie’s actual death, and Connor moving his way into the role. It’s not especially well-drawn, but Chuck Dixon hits all the right points. He uses this issue to show how everyone reacts to the news, and how everyone is going to move on. He also uses it to set up more of the ninja theme that Connor is going to pick up as Green Arrow. This death was one of the more ignored of this time period, so it is a hard issue to find. It’s pretty interesting stuff, but if it happened nowadays no one would really care. More info can be found HERE

Oliver Queen was brought back to life by Kevin Smith, and had his own 75 issue series before marrying Black Canary, that lasted another 20 or so issues. He’s been part of the reboot with a Dan Jurgens/George Perez art team. It’s pretty to look at.

And that’s it! I’ll be back in a couple weeks as always. Later!