All right folks, I just happened to grab two comics I had already read for this week’s reviews.  So I’m pulling copies from my personal collection that are still available in our online store.  I just wanted to let you know I’m “dubm.”  If you want to read the comics I accidentally grabbed, read the Tales to Astonish and Wonder Woman comics HERE.  I’m “smart.”  Let’s do this! 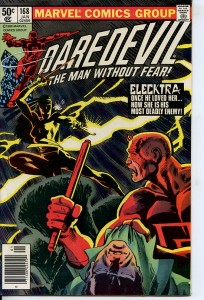 It still counts as an old book if it’s only 7 years older than me right? This is the infamous debut of Elektra (spelled wrong on the cover of her debut, but we’ll get past that). It’s also one of the early written and drawn issues of Frank Millers run on Daredevil. For those of you that love some Frank Miller, or haven’t completely decided how to feel, this is some of (if not the) best work he’s ever done. Sure you have the grim and gritty Sin City and Dark Knight Returns, or the absolutely crazy Ronin or All-Star Batman, but this Daredevil work is some of his best. It’s your basic “boy meets girl, remember girl’s from past, they both do ninja stuff” kinda love story, and it’s also setting up the entire arc into DD#181. The fact that Miller introduced a character that only technically lived for 13 issues and is still one of the most prominent features of the Marvel U is all you need to know. More info can be found HERE

Elektra?  Still dead. Came back, but died again in Secret Invasion, I think. She’s back and forth a lot. Daredevil? Not being Daredevil anymore, but he will be again soon with a new title starting in a couple months. Make sure to check it out. 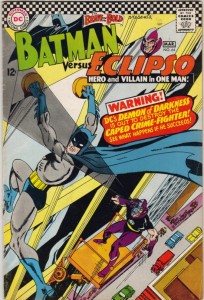 I love the Brave and the Bold. Sorry if that’s weird, but the whole team-up with Batman idea is just so good. And this is one of those cases. Eclipso of House of Secrets fame joins with Batman in one of the stranger stories of the Silver Age, and that’s Really saying something. I can barely even find the words to explain this one folks. A lost love looks to Batman for help, but she’s really plotting her revenge on the Bat. Eclipso does the work he’s supposed to do, but the love interest, now disguised as the Queen Bee has a change of heart. The two of them work together to finish off Eclipso by defeating him with his one weakness, Light. No seriously, that’s all it takes, a flashlight and he cries. More info can be found HERE

Batman is everywhere right now, Eclipso is not.  There’s a multitude of titles, including some about to be rebooted that will feature Batman.  Eclipso has been running around giving the JLA trouble for the last couple issues, so that’s where you can find him. 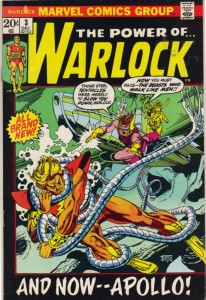 Originally known only as “HIM” in an issue of Fantastic Four, Warlock became a cosmic mainstay, picking up his own series in the 1970’s. What’s interesting is that this comic is drawn by Gil Kane, one of the most prominent artist of the era.  This comic is really, really bizarre. It’s a combination between the cosmic of Warlock and the weirdos that he has to fight, and the ocean. That’s right, Warlock has a bunch of groovy teen sidekicks who have a boat that they’re riding in the ocean for just such a situation. It’s the kinda 70’s book that has no idea what it wants to be. Add to this the fact that the main bad guy he’s fighting is named Apollo, after the Sun-God, and there’s a whole mythology element that’s just confusing the crap out of everything.  It’s weird folks.  More info can be found HERE

And that’s it! Next time I promise I’ll pick up some stuff that i haven’t already done.  I should really keep track of this more…

This entry was posted in Reviews and tagged Batman, Daredevil, Eclipso, Elektra, Warlock. Bookmark the permalink.