Round two!  I am rolling right through these things!

Ditko! Within the first page they let you know that this is a reprint. I think it’s a lot more fun when Stan Lee would actually call people out for being late and then force a reprint down the readers throats.  This is your fairly generic old-school Ditko Dr. Strange story.  The one thing that’s always worth noting about Ditko is how much he (at least seems) to have enjoyed drawing the backgrounds of the Astral Plane.  It’s like Stan Lee’s “script” said “screw with reality, whatever you want” and then Ditko went to town.  I’m not really a fan of his drawings of faces, but those backgrounds are absolutely insane.  It’s quality Dr. Strange stuff with a side of his old school Spider-Man to add.  What’s not to love?  More info can be found HERE

Is Dr. Strange the #1 sorcerer anymore?  I’m not even sure.  There’s plenty of reprints of Strange in trades, and he’s currently in the New Avengers.  Other than that, not too much Dr. Strange right now. 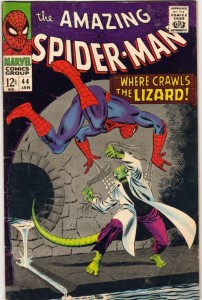 Hey! More Spider-man!  But this time with Romita Sr. art.  The Lizard is an interesting character.  He’s got a lot of the same ideas as Man-Bat (can’t control transformations, becomes a creature, not even his family can stop him, etc.) but he’s completely aware of what’s going on.  Romita has a strange interpretation of him; certain angles don’t quite work for me.  The only thing that kills me is the writing.  It’s so much, without leaving anything to my imagination.  It’s basically where Brian Michael Bendis got his writing style from, and it makes my head hurt after a while.  If Romita was writing the script, then he didn’t trust his own art, which is a shame.  Or he thought that he needed to cover a crapload of a plot, and that’s just painful.  More info can be found HERE

Hey, have you heard of Spider-Man?  Cause he’s freaking everywhere.  New Avengers, Amazing Spider-Man, Ultimate Spider-Man, FF, and much much more.  Heroes for Hire even!  Seriously, grab a Marvel Book and you’re either going to get Wolverine, Deadpool, or Spider-Man.  Just ask! 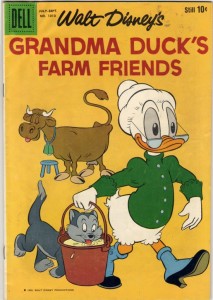 What a title! And when they say Farm Friends, they aren’t kidding.  Huey, Duey, Louie, Dumbo, Brer Fox, the Crows.  It’s all over the place.  This comic is a short-attention-span comic readers dream (which is why I love it).  For the comics aficionados, this has Carl Barks art.  That means it’s essentially classic Disney duck related art.  It’s the kind of book where you can really introduce someone to proper Disney comics, and it’s good quality stuff.  It’s also got Uncle Scrooge in it, so it’s a perfect example of what Barks could do.  More info can be found HERE

Walt Disney still has plenty of comics, but not anything as specific as Grandma Duck’s Farm Friends…  There’s Mickey Mouse, Donald Duck and Uncle Scrooge still on the market.  There’s also some collections of Barks works and Don Rosa (who was heavily influenced by Barks).  Check it out if you like the Ducks!

And that’s all.  Hope you enjoyed, and we’ll be back in two weeks!