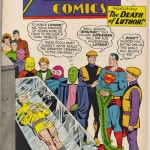 Another day, another review of pure 60’s insanity.  Let’s do this! Action Comics # 318 from 1964 So apparently there’s a planet named Lexor that absolutely worships Lex Luthor… news to me!  Luthor attempts to return to it by sleeping on a cot in a spaceship (you heard me), and it totally works.  He, obviously, has the entire planet turned against Supey and that makes things extremely difficult when Superman comes to the planet to get him back.  Superman punches Lex in the face so hard he dies, again not kidding, so he’s put on trial for the murder of … Continue reading →

It Came From The Back Room #7 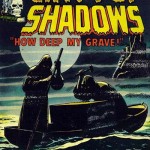 Standard recap: I’m slowly going through AABC’s one-million-plus back-issue room, restocking the boxes on the sales floor and pulling stuff to sell as discount/overstock/special items. I’m going through the alphabet backwards (don’t ask), and at my speed (especially with the school year now in full gear), this amounts to a two-year project. I’m currently on the Marvel “M” stuff, and here are some of the titles I’ve been encountering: Marvel Universe (Official Handbook of the…) Most of the overstock we have on these are from the two ’80s collections. There was a time when every true Marvel zombie just had … Continue reading →