So here’s your second dose of my opinion of old stuff.  Yes, this stuff is much much older than I am, but on the internet, everyone gets an opinion! 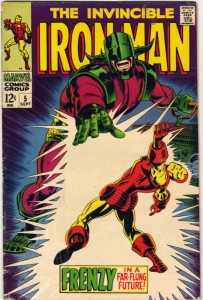 I never get tired of Stan Lee.  Though this issue is written by Archie Goodwin, the effects of Lee’s editing run heavily throughout.  This issue is especially interesting because it supposedly takes place in a seperate reality, and by the end of it, Tony Stark is right back where he started.  So what does that mean?  Iron Man #5 didn’t even remotely worry about continuity or being relevant to a future story.  George Tuska draws in his consistent style and doesn’t take anything away from the book.  More info can be found HERE.

Iron Man has been around forever and just lately has gotten huge.  With two movies under his belt, the best comic to read currently is Invincible Iron Man by Matt Fraction.  There’s plenty of other mini-series to look into on the stands today! 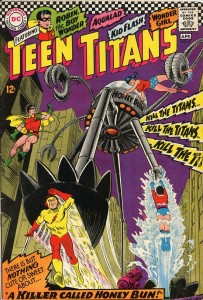 So the Teen Titans stop a robot and racism in one issue? Yes, Please!  In a strange parallel to our current times, this issue of Teen Titans involves people being afraid of different races and foreign exchange programs.  Apparently all it would take is a giant robot to actually bring us all together.  This book is written with all the stereotypes of “hip lingo” of the day (I’m pretty sure they used the name “cat” by the second page).  Strangely awesome, if only for the fact that it was trying too hard to be socially relevant.  More info can be found HERE.

The Teen Titans are everywhere now.  Donna Troy is in the Titans, Robin is now Batman, there’s a new Aqualad in Brightest day, and I don’t even know where Kid Flash is.  There’s also a regular Teen Titans series currently available. 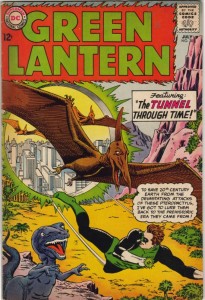 This cover is loved by one half of our esteemed ownership, and for good reason.  It’s a really good Gil Kane drawing, but it doesn’t compare to the story inside.  Self-aware pteradactyls attacking the modern earth, and the only way to save them is to use GL’s willpower open a time rift and scare them with T-rex’s.  No, seriously, that’s what he does. And the back up is a Sinestro, Katma Tui, and Hal Jordan story from back when the Corps didn’t hate the Guardians.  Great stuff, and made even better by what Gil Kane brings to the table.  More info can be found HERE.

Green Lantern just got through the huge crossover Blackest Night and now goes on in Brightest day.  You can also read Green Lantern by Geoff Johns and Doug Mahnke, which may be the best book by the big two currently.

And that’s it! Got something you want me to read?  Post a comment and I’ll do it!

One Response to Fresh Eyes on Old Books #2 by Dan!